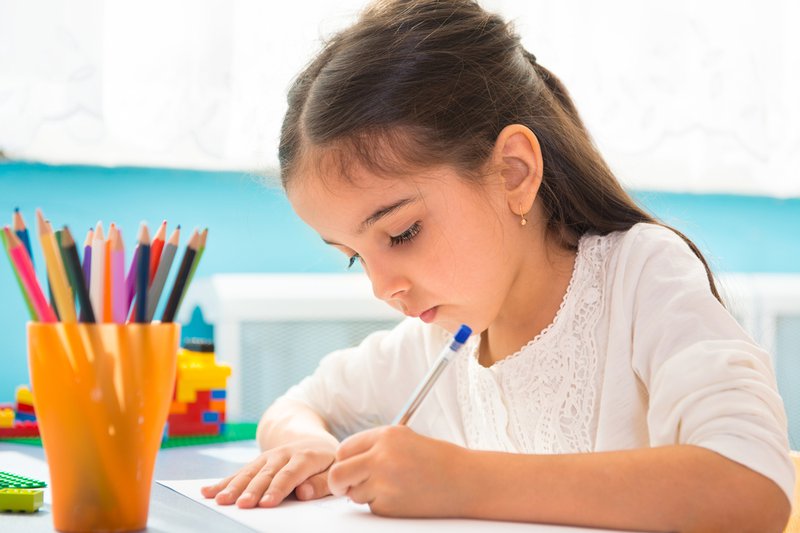 Early vocabulary and alphabet knowledge are two of the many foundational skills that children develop at four- and five-years-old. Building alphabet knowledge, or the ability to recognize letters and sounds, is key to understanding letter-sound relationships that lead to reading and writing. As children develop a robust vocabulary, they more easily comprehend stories read aloud and independently, and can more easily decode words as they begin to read.

Developing these skills is not as inherent as may be assumed. Young children need consistent exposure to high-quality, play-based early learning experiences at home and at school for literacy and language to flourish. This is especially true for pre-K children who are dual language learners (DLLs), cultivating these fundamental skills while acquiring a second language. With particular interest in how young DLLs’ language and literacy skills develop over time, a new study compares children’s development in both English and their home language over the course of one pre-K year.

The study analyzes three studies of four- and five-year-old children who were Spanish-English dual language learners. Most children in the studies participated in center-based pre-K programs targeted towards low income and at-risk families, including Head Start and North Carolina’s More at Four program. English was the language of instruction in each of the classes from which students were assessed, though many classrooms had assistant teachers who spoke Spanish. In each of the three studies, bilingual data collectors administered a series and combination of assessments in Spanish and English across the fall and spring of the children’s pre-K year to gauge their language and literacy skills.

The findings were largely consistent with the researchers’ hypotheses and previous studies of young dual language learners’ literacy and language development in pre-K. Specifically, DLL children in the study showed large gains in their English language development, though roughly half maintained higher levels of Spanish language abilities than English language at the end of the year. Overall, the young dual language learners in this study began and ended their pre-K year with English vocabulary skills that were below average, though many DLLs made larger gains in their English language skills than their monolingual peers.

Along with their English vocabulary, children’s letter-word identification skills consistently grew over time, while their growth in the same skills in Spanish were often negligible. In most of the studies, children’s Spanish early literacy and language skills were positively related to their overall English early literacy skills, though the opposite did not hold true. Disparagingly, children seemed to be stalling in their language and literacy skills in their home language, particularly as compared to their gains in English.

While pre-K experiences proved beneficial in building dual language learners’ literacy and language abilities in English, as stated in the report, “Usage of Spanish in schools is needed in order for children to maintain and make gains in their [home] language.” Maintaining a home language is critical for children’s sense of identity, ability to communicate and relate to their families, and can open doors to economic opportunities as children enter adulthood. Speaking a second language is an asset that children should be strengthening while in school.

One program model that nurtures children’s home language while fostering language and literacy development in English is the Dual Language Immersion (DLI) model that offers instruction in English and a partner language such as Spanish, Arabic, or Mandarin. DLI programs are a cost-effective way to boost young children’s academic growth and intercultural competency, and to help DLLs maintain and strengthen their proficiency in their home language. DLI programs often begin as early as pre-K or kindergarten, though the number and rigor of language immersion programs offered to four- and five-year-old children is limited.

The National Institute for Early Education Research’s 2017 report Supporting Dual Language Learners in State-Funded Preschool found that in all 35 state pre-K programs with policies that support DLL students, bilingual instruction was permitted. However, only six state pre-K programs had teachers that were trained to work with DLLs and just three required bilingual staff if a high enough percentage of students were DLLs. To fully embed children’s home language in the classroom, bilingual pre-K educators must be recruited and supported, through innovative pathways like Chicago’s Bilingual Teacher Residency program, which added a track for early educators earlier this year. Where bilingual early educators are already working, like the classroom assistants in this study, educators should be encouraged to directly instruct and scaffold instruction in Spanish for their DLL students.

As the study explains, “because schools in the United States hold children to monolingual standards, Spanish-English children from low-income homes face great challenges when attempting to catch up to their monolingual peers as they progress through school.” To ensure school readiness in literacy and language skills, dual language learners need improved access to high-quality, publicly-funded early education. Programs like Head Start and More at Four still only reach 44 percent of all 4-year-old children in the United States. However, access to English-only pre-K education is not enough. DLLs need instruction in their home language from well-trained, bilingual staff, and assessment data in both languages upon pre-K enrollment and throughout the year, to support, strengthen, and honor their valuable asset of multilingualism.