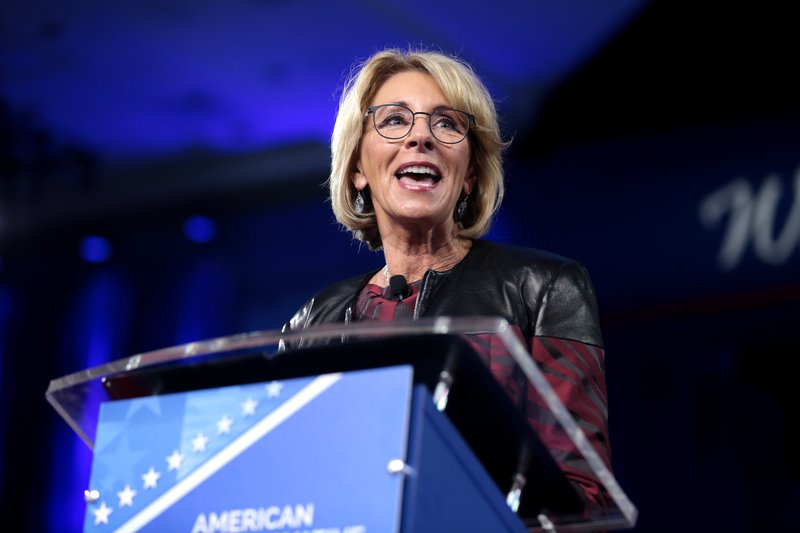 Update 3/29: Despite Secretary DeVos telling reporters that year-round financial aid is under consideration, the Trump administration this week reportedly called on Congress to cut another $3 billion in current-fiscal-year spending from the Department of Education's budget, including $1.3 billion out of the Pell Grant program's current surplus. If that were to happen in conjunction with the proposed $3.9 billion reduction in FY 2018, nearly half of the program's entire surplus would be gone in an instant--risking the long-term financial footing of the program without any increased spending on the students for whom those dollars were originally designated.

Today, the Trump Administration releases its “skinny budget” request to Congress--a stripped-down version of the full budget proposal that will come later this spring. The Administration had said weeks ago that the budget would make huge cuts to non-defense spending to pay for a huge increase in the defense budget, to the tune of $54 billion. Today, they made good on that promise, proposing to cut the Department of Education’s budget by 13 percent from last year’s total and targeting some popular higher ed programs for severe cuts.

Specifically, the budget request calls for deep cuts to some student financial aid programs--like the Supplemental Educational Opportunity Grant (SEOG) and Federal Work-Study--but largely preserves the size of the federal Pell Grant program. Instead of cutting the maximum Pell Grant or narrowing eligibility, the budget would find savings by pulling $3.9 billion out of the program’s current $10.6 billion surplus.

The preservation of Pell at the expense of the program’s surplus sends an important message from the DeVos Education Department--if it holds. The skinny budget doesn’t include details of mandatory funding, so cuts from the Administration could still be proposed later, in the full budget that will come out this spring. Still, given that Pell is the Department’s largest program, many had worried it would be vulnerable to cuts in an effort to make up for defense spending. Pell is the cornerstone of the federal financial aid program, and provides up to $5,815 annually to the lowest-income students; more than 70 percent of its recipients come from families making less than $30,000 annually. Ensuring students continue to have access to those grants, without cutting the size of the award, has been a priority for advocates and institutions alike. The Trump Administration appears to be protecting the Pell Grant program even in the midst of major budget cuts; but those stakeholders will no doubt still be watching closely later this year to see whether the White House proposes to keep the mandatory funds the program currently receives in place. Without those funds, the maximum Pell Grant would fall significantly over the next few years.

Meanwhile, SEOG and Work-Study weren’t spared from budget cuts. The budget blueprint calls on Congress to eliminate SEOG entirely. Though the budget blueprint describes SEOG as “less well-targeted,” presumably because funds are distributed first by institutional need and then to students, SEOG recipients’ income levels are comparable to Pell recipients. Seventy-one percent of dependent undergraduate recipients from families making less than $30,000 per year and 76 percent of independent recipients earning less than $20,000.

It also calls for cutting Work-Study dollars “significantly,” and proposes to “reform” allocations to schools for the remaining funds. This makes some sense. Nearly two-thirds of dependent undergraduate Work-Study beneficiaries have incomes over $30,000 annually, making up roughly half the entire population of Work-Study recipients. Moreover, Work-Study dollars disproportionately go to private nonprofit institutions. But studies of the Work-Study program have shown students receiving Work-Study are more likely to graduate and be employed after graduation. And these positive effects are larger for low-income students who attend public institutions. One-third of American undergraduates are working 35 hours per week and half are working at least part-time. Finding ways to help these students balance their jobs with their studies is more needed than ever. Reallocating the Work-Study allocation makes sense; cutting it significantly does not.

Student financial aid programs aren’t the only ones that took a significant hit in the President’s budget request. Both TRIO and GEAR UP, college access programs that provide grants to nonprofits, institutions, and other organizations to help disadvantaged students enroll in and complete college, took hits themselves. These changes aren’t likely to go over especially well with those grantee communities; TRIO’s lobbying association, the Council for Opportunity in Education, doesn’t like change very much.

The Administration proposes cutting the TRIO programs by about 10 percent, from $896 million in FY 2017 to $808 million in FY 2018. Specifically, they suggest cutting funding to TRIO programs in the areas that have limited evidence of effectiveness in improving student outcomes. That’s a bit of a puzzling condition to place on funding (even if it is a welcome sentiment), since Congress literally banned TRIO programs from the random assignment of students for the purposes of evaluation in 2008. But to date, there have been other types of evaluations for some TRIO programs, which revealed potentially positive impacts for the Talent Search TRIO program, modest positive effects through Student Support Services, and a questionable study that drew few conclusions about the Upward Bound program.

Meanwhile, the budget proposes to cut GEAR UP by nearly a third, from $321 million to $219 million. The Department is in the process of running new GEAR UP state and partnership grant competitions for FY 2017; the budget blueprint notes that the entirety of GEAR UP funding will be reserved for continuation awards for existing grantees. It also notes that the continuation awards are pending the completion of a rigorous evaluation of a portion of the program. So at least the Department was consistent in using evidence to drive its budget cuts--though GEAR UP doesn’t have the random assignment ban that exists in TRIO, there’s still shockingly little evidence outside a single study available as to the early outcomes of those interventions.

The budget also calls for maintaining federal Title III and V dollars to historically black colleges and universities (HBCUs) and minority-serving institutions (MSIs), to the tune of $492 million. In reality, that’s not quite maintaining--in FY 2017, Aid for Institutional Development programs received $459.9 million in discretionary dollars, and Hispanic-Serving Institutions received another $116.9 million, for a total of $577 million. Since the skinny budget doesn’t include program-level figures, we’ll have to wait and see where they plan to make the cuts. But the pro-HBCU and -MSI framing is hardly surprising, given Secretary DeVos’s misstep last month, when she referred to HBCUs as a model for school choice rather than a necessary byproduct of Jim Crow laws. Still, this superficial overture is unlikely to make the Administration new friends in the HBCU community, when coupled with huge cuts to social services, slashing-and-burning through the TRIO and GEAR UP programs, and less student financial aid.

All told, this budget request is nothing more than that--a request to Congress, unlikely to be heeded and subject to the tinkering and votes of hundreds of members of Congress. But it’s an indication of the priorities of the Trump Administration. In that sense, it offers some important guideposts for the Administration’s goals: smaller government, deep cuts both to student and institutional aid, and all-words-and-no-action when it comes to helping U.S. students access a better education and well-paying jobs.