Why Don’t Homeless People Just Get Jobs? Many Already Have One. Or Two. 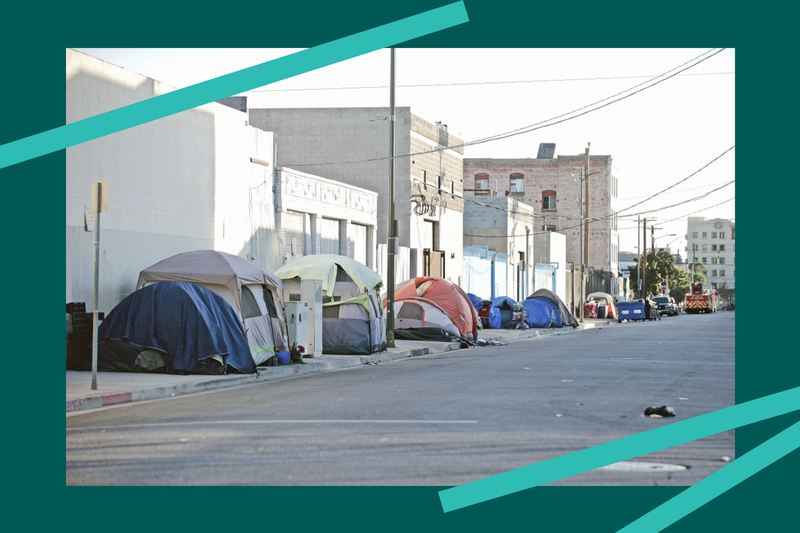 Americans will soon have to come to terms with an uncomfortable truth: That having a job (and in some cases, more than one job) is not a panacea for homelessness. As costs of living rise and wages stagnate, the population of the “working homeless” grows. In this extended Q&A from The Fifth Draft—the National Fellows Program newsletter—New America National Fellow Brian Goldstone previews his new book on housing insecurity. Sign up for The Fifth Draft to hear how the world's best storytellers find ideas that change the world.

Your Fellows project will be a book about housing insecurity and the dramatic rise of the working homeless in America. Can you share your definition of working homelessness?

By “working homeless,” I mean the growing number of people in the United States who are working 50 hours, 60 hours a week but still can’t secure stable housing. These are people who go to sleep at night in their cars, or in extended-stay hotel rooms, or even on the street and head out to their jobs the next morning—often gig work like Uber or DoorDash, or low-wage jobs in the service sector or care economy.

There’s something scandalous, seemingly oxymoronic about the term. But in a country where roughly 7 million workers are living below the poverty line and left to fend for themselves in a private, profit-maximizing rental market, it’s not surprising that more and more families are being deprived of a roof over their heads. And now, with the federal eviction moratorium set to expire in a few weeks, the ranks of this population are expected to swell to a truly catastrophic scale.

Your project grew out of a 2019 New Republic article entitled “The New American Homeless.” What are some of the challenges and opportunities found in expanding an article into a book-length project?

One of the nice things about writing a book is the space to investigate the multiple layers that make up a given story or phenomenon. When I was reporting the New Republic article, I realized that examining homelessness and housing precarity required grappling with a whole array of intersecting systems and domains: from urban planning and real estate speculation to the new labor economy, racialized displacement and dispossession, and the world of homeless service providers. A book, unlike a magazine piece, allows for a more extensive and exploratory plunge into this subject matter. That said, none of the protagonists in the book—six unhoused families, along with a host of social workers, case managers, city officials, and tenant organizers—appeared in the original article. So in many ways it felt like an entirely different project.

What about your home city of Atlanta lends itself to telling the story of the working homeless?

Atlanta has long been a laboratory for some of the nation’s most consequential experiments in housing policy. In 1935, President Roosevelt traveled to Atlanta to dedicate Techwood Homes, the first public housing project built in the United States. Six decades later, the city was among the first to embrace an emerging neoliberal consensus where housing was concerned, demolishing its public housing, forming partnerships with private developers, and imposing strict work requirements on recipients of housing aid. These transformations continue to reverberate into the present.

But Atlanta is also important because of how representative it is. Like many urban centers, the city has undergone a development boom in recent years. This renaissance has exacted a heavy toll on Atlanta’s poor and working-class residents, the majority of them Black, who are getting relentlessly pushed out of the city—and increasingly out of stable housing altogether. The families I’ve been following are the casualties of Atlanta’s revitalization.

How does having a PhD in anthropology inform your journalism?

The reporting for this project has felt very similar to the fieldwork I did as a cultural anthropologist—in fact, it’s often seemed more ethnographic than journalistic per se. I’ve now been reporting the book for almost two years, with the bulk of that time spent embedded at an extended-stay hotel where three of the families I’m writing about are living. I think my academic training has helped me to appreciate the significance of long, immersive engagement with a social world. You begin to perceive the depth and texture, the ebbs and flows, of people’s lives. Last year, for instance, one of the families received assistance from a local agency and were able to move into their own apartment. They were elated. Then, two months ago, came an eviction notice. What I thought was a happy ending turned out to be yet another moment in a grinding cycle of insecurity.

You have said that the housing crisis is solvable. How do you think your book will contribute to finding a solution?

I believe very strongly that finding a solution requires an accurate appraisal of the magnitude and severity of what we’re facing, and a proper diagnosis of what brought us here. If the problem is a lack of affordable housing units, then the solution is simple: build more of them. But if the problem is a fundamentally unjust, dehumanizing, Hunger Games-like rental market—where increased rent can be tantamount to eviction, where a low credit score can keep you and your kids trapped in a shelter or hotel room, where a family can be forced out of their building because their landlord decided it’s more lucrative to sell it—then a different set of solutions will be necessary. Is housing a basic right, no less vital than education or food or medicine? Or is it a commodity to be hoarded and exploited for maximum profit? It matters who we listen to. Our housing experts are the tens of millions of tenants whose fates are bound up with how these questions are answered.

Is housing a basic right, no less vital than education or food or medicine? Or is it a commodity to be hoarded and exploited for maximum profit?

Displaced in America: Mapping Housing Loss Across the United States (Future of Land and Housing): We know that housing loss—both evictions and foreclosures—persistently affects the same communities. This report visualizes housing loss at the county level nationwide to predict where future housing loss will occur and offers direct resources to prevent the harm before it proliferates.

Power to the Public: Tackling Homelessness (Public Interest Technology): According to a recent U.S. Department of Housing and Urban Development report, 580,466 people experienced homelessness in the United States on a single night in 2020, an ongoing problem that’s been difficult to solve. In this event, the Public Interest Technology program will discuss how public interest tech can help mitigate homelessness.