Pluralism on the Prairie 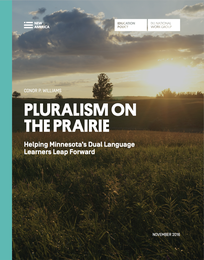 One in six school-age Minnesotans has at least one immigrant parent and one in five Minnesotans under five years old is a child of immigrants. This trend is part of a significant shift in the state’s racial and ethnic makeup over the past 25 years.

A new report from New America’s Dual Language Learners National Work Group looks at Minnesota’s redesign of policies and practices to better support the education of this significant population.

The state’s primary reform on behalf of these children, the Learning for English Academic Proficiency and Success Act (The LEAPS Act), passed in 2014, and created state policies that focus on supporting dual language learners’ academic success.

“Minnesota’s policies stemming from the LEAPS Act are some of the most comprehensive, research-based, and forward thinking in the United States,” says Williams in the report.

LEAPS aims to improve how schools identify these students and how teachers target them with high-quality language services. However, Williams notes that the mere existence of policies that prioritize DLLs is no guarantee they will be carried out. In the past two years, initial moves have been made to implement the law, but some observers, advocates and policymakers note that significant actions haven’t been taken to match initial enthusiasm around the act.

In addition to recommendations for other states that seek to follow Minnesota’s example, Williams identifies obstacles to full and effective implementation. These obstacles can be grouped into the following three categories:

“Full implementation of the LEAPS Act would make it more likely that these DLLs will reach full English proficiency while retaining their native language abilities,” says Williams. “These students would be more likely to succeed throughout their academic careers, and would provide the state with a highly-skilled workforce that also happens to be multilingual and multicultural.”

This report is the second installment in the DLL National Work Group’s series of papers exploring how states are changing their PreK-12 education policies for students learning English at school. The previous report, Blueprint to Building: Lifting the Torch for Multilingual Students in New York State, looked at education policies supporting DLLs in the state of New York.