From Blueprint To Building

Lifting the Torch for Multilingual Students in New York State 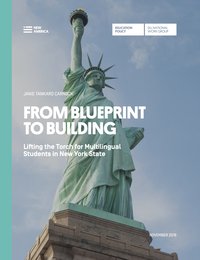 Around 30 percent of families across New York State now speak a language other than English at home, resulting in 240,000 English language learners (ELLs) in the state’s primary and secondary schools who speak nearly 200 different languages.

In the paper, From Blueprint to Building: Lifting the Torch for Multilingual Students in New York State,” program associate Janie T. Carnock, highlights both the bright spots and the emerging challenges of New York’s  ELL reforms by charting their inception, design and early implementation.

Unlike other states grappling with how to respond to recent influxes of ELLs for the first time, the Empire State has been experimenting with ELL policy reforms for some time. New York’s reforms offer a rare example of cohesive state-level policy innovation and leadership for multilingual children.

"The comprehensive nature of New York’s strategy stands out,” says Carnock.  “Few states have pulled together such a holistic approach to better serving their ELLs."

As the new strategy rolled out in the 2015-2016 school year, the appointment, election and increased visibility of linguistically-diverse, state-level leadership further pushed the momentum for serving ELLs.

In the report, Carnock shares several recommendations for other states to take away from New York’s experience with ELL reforms:

Even as New York represents an example of strong, state-level policy innovation and leadership, the work is far from finished. Advocates and practitioners in the field have voiced concerns over the rapid scope of change to ELL program design and staffing.

“While the reforms are new, they present rare potential to strengthen educational opportunities for ELLs with state policy,” Carnock notes in the paper. “New York’s evolving policies signal a clear recognition of education’s promise and the role multilingual learners will play in the state’s—and country’s—future.”

The full report can be found here.