The Story the Enrollment Management Industry Likes to Tell 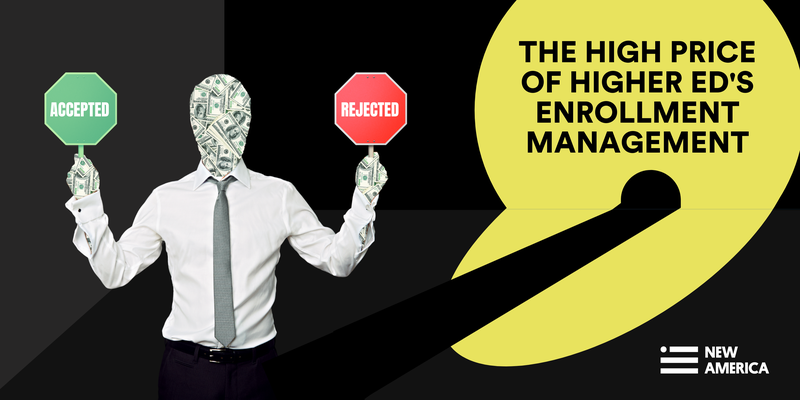 This blog post is the third in a periodic series aimed at lifting the veil on the enrollment management industry. The first two posts can be found here and here.

There is a story that the enrollment management industry tells to defend itself from charges that it has made higher education less accessible and affordable for low-income, working class, and even middle-income students.

In this story, enrollment management offers a neutral, value-free set of tools that colleges can use for any purpose they see fit. College officials can, for instance, use these tools to make their campuses more socioeconomically and racially diverse or they can use them to make their campuses less so. The fact that so many colleges have used enrollment management strategies to pursue the “best and brightest” students and the wealthiest to rise up the rankings and raise their revenue— while, at the same time, making it harder and harder for low-income students to afford to attend — is the fault of college presidents and their boards, and not of the industry that has provided the colleges with the tools to improve their competitive position as efficiently and effectively as possible.

The enrollment management industry has done such a good job of telling this story that some influential higher education experts, who wish not to offend college admissions officials, have adopted it as well. Case in point: the Georgetown University Center on Education and the Workforce’s 2020 book The Merit Myth: How Our Colleges Favor the Rich and Divide America provides a searing critique of selective colleges’ endless pursuit of greater prestige, rank, and revenue, but then lets enrollment management off the hook:

That result isn’t inherent to enrollment management, rather, enrollment management allows colleges to mask a deliberate choice made in pursuing their institutional interests. College officials who would never admit outright to wanting to reduce numbers of low-income students can use enrollment management to twist the knobs to produce such a result. Enrollment management can cause suspicion because it’s carried out through complex mathematical analyses and often produces results best explained in cynical terms, yet the mischief stems not from the tools used, but from the ends pursued.

At the end of the day, it’s people who are driving the admissions process, and they come to it with different agendas, constraints, and relative levels of power. Many in the admissions offices sincerely care about students from less-advantaged backgrounds. But they’re stuck working within a system that’s defined by its own biases: that applies admissions criteria to meet shifting institutional criteria to meet shifting institutional priorities rather than to enforce rigid standards of merit; that has few, if any, firewalls to maintain its integrity and prevent inappropriate interference; and that allows market pressures and bottom-line concerns to overrule good deeds.

The Chronicle of Higher Education made a similar argument in an article in 2016 called “The Enrollment Manager as Bogeyman”:

It’s also worth remembering that though enrollment managers are prominent players with great sway on many campuses, they have bosses, too. They take orders from presidents, answer to trustees, and explain themselves to faculty members. All of these people have great expectations, for more and better applicants, more super-duper young scholars who can fill all the traditional majors and that brand-new one, too.

When it comes to how inequitable our higher education system has gotten, there is, of course, plenty of blame to go around — from governors and legislators who have slashed per-student funding in their states to college presidents who are looking to quickly make their mark to business-minded trustees who too often have little regard for the public mission of their schools.

But what these higher education experts and journalists are missing is that the charges made against enrollment management are not about the actions or motivations of individual enrollment managers on their campuses. As the Merit Myth argues, there are plenty of college admissions officers who are well-motivated and genuinely would like to make their campuses more socioeconomically and racially diverse.

The critique of enrollment management is far broader. It’s about a powerful and lucrative industry that aggressively markets sophisticated strategies and algorithms to colleges to improve their rankings and revenue. The enrollment management industry’s very existence depends on convincing college presidents and their boards that the schools’ fortunes and even survival depend on using these products, which all too often disadvantage low-income students and many students of color.

Just how big a business is enrollment management? It’s hard to know as there are many private companies that are engaged in it, and they have not garnered a lot of attention from the news media, and amazingly even less from the higher education trade press, which has never really shown a spotlight on them. But in 2014, we got a clue. That year, the consulting company EAB purchased the enrollment management firm Royall & Co. for a whopping $850 million. The same year, two giants in the field — RuffaloCODY and Noel-Levitz — merged for an undisclosed sum to create the mega-company Ruffalo Noel-Levitz with about 1,900 clients.

Enrollment management companies hire college admissions officials to act as consultants to help sell their algorithms and programs to other campuses that fear being left behind if they don’t embrace these strategies. And these companies offer enticing career opportunities to college admissions and financial aid administrators who are looking for a bigger payday than their nonprofit colleges and universities can offer. These administrators can then trade on the relationships they’ve made throughout their careers to open doors for their companies to hawk their products and spread the use of enrollment management further.

These companies have not gotten rich offering colleges a neutral, value-free set of tools. Instead, they have grown prosperous by promising colleges that they will help them pursue the most desirable students (“the right students,” as Ruffalo Noel-Levitz suggestively states on its website).

In truth, the enrollment management industry has played a pivotal role in helping define the goals colleges pursue and providing the strategies and products that colleges need to achieve them. And it has convinced college presidents and boards that they would be lost without their services. But perhaps the enrollment management industry’s greatest success has been staying in the shadows, while shifting the blame for the harm it has done on to its customers.

Stephen Burd is editing a forthcoming book with Harvard Education Press on the enrollment management industry.