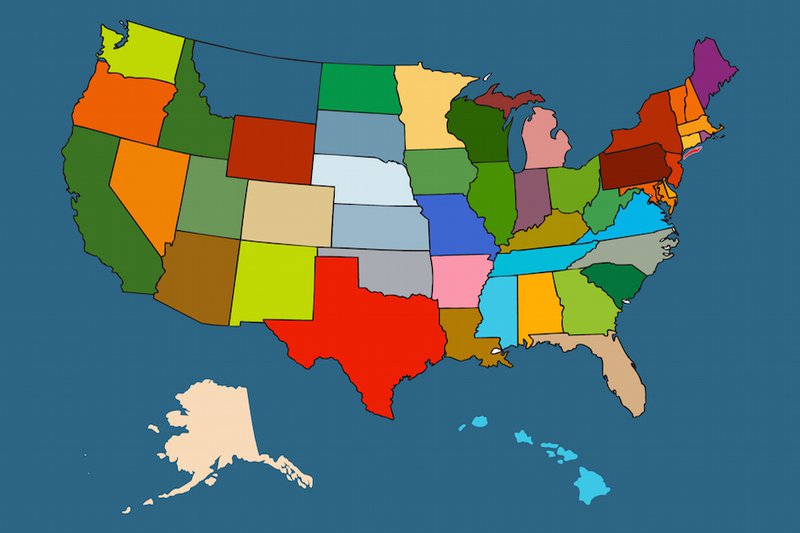 Today the National Institute for Early Education Research (NIEER) released its 2017 State of Preschool yearbook. This annual report is the only national report on state-funded pre-K programs. The report presents helpful data on the state of pre-K programs nationally, as well as provides breakdowns of each state’s progress in providing high-quality pre-K services to three- and four-year-olds.

During the 2016-17 school year, 42 states plus D.C. and Guam spent a total of $7.6 billion on state pre-K programs, a 2 percent increase in inflation-adjusted spending compared to last school year. While overall state spending increased, per-child spending slightly decreased when adjusted for inflation, from $5,025 per child in 2015-16 to $5,005 in 2016-17.

More than 1.5 million three- and four-year-olds were served by state pre-K programs, a slight increase from the 2016 Yearbook. The report explains that 33 percent of four-year-olds are now enrolled in state pre-K programs, a one percent increase from last year. NIEER Senior Co-Director Steven Barnett put these numbers in context, noting in a press call that “In 2002, just three states and D.C. served over one-third of their four-year-olds; now that’s the national average.” The enrollment rate of three-year-olds, however, remained unchanged at 5 percent, with D.C. and Vermont the only states serving a majority of three-year-olds.

Ten states now serve 50 percent or more of their four-year-olds in state-funded pre-K and five states serve more than 70 percent (see map below). When state pre-K enrollment is added to Head Start and special education services, a total of 44 percent of four-year-olds and 16 percent of three-year-olds were served during the 2016-17 school year. 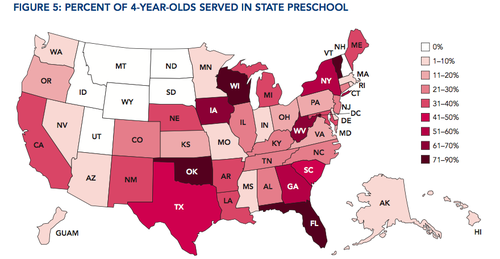 Despite the encouraging signs of progress when it comes to the growing number of young children with access to pre-K, the report highlights the fact that the quality of pre-K varies considerably by state. NIEER lists 10 quality benchmarks for pre-K and examines how many of these benchmarks each state pre-K program meets. These research-based quality standards do not guarantee high-quality, but they do establish the floor for standards that states should have in place. The 10 quality standards are (NIEER updated some of their standards last year):

The good news is that three state pre-K programs, Alabama, Michigan, and Rhode Island, met all ten of the quality benchmarks. Last year, only Alabama and Rhode Island met all ten benchmarks. Unfortunately, nine states met fewer than half of the benchmarks, including some of the programs serving the largest number of children across the country, such as Florida, Texas, and California’s transitional kindergarten (TK) program.

The NIEER report includes a special section on policies affecting dual language learners (DLLs). While DLLs now comprise about 23 percent of the preschool-aged population, much work is needed to serve these students well. Barnett pointed out on a press call that “unfortunately, not much has improved” in the past year when it comes to policies supporting DLLs in pre-K programs. For example, most states don’t have the data necessary to report how many DLLs are enrolled in pre-K or what languages they speak at home. (For more information on data gaps when it comes to DLLs in early education programs check out this blog series from New America).

Many states with a large number of DLLs do not require pre-K teachers to have any specific training for working with this population of students. In fact, the report notes that only six state pre-K programs require lead teachers to attend this sort of training.

NIEER also highlights six states to watch. These states - West Virginia, Vermont, Wisconsin, Alabama, New York, and Illinois - have all expressed the desire to provide universal pre-K for four-year-olds. Three of these states - West Virginia, Vermont, and Wisconsin - have come very close to achieving that goal. With help from a Preschool Development Grant, Alabama has steadily increased the number of four-year-olds served while still meeting all ten quality benchmarks. In New York, funding per child has risen dramatically over the last few years, in large part due to the Pre-K for All initiative in New York City. Illinois, on the other hand, has seen its pre-K program falter in recent years due to declining enrollment and funding. Encouragingly, pre-K funding in the state increased substantially this year.

The report notes that much of the gains in pre-K enrollment over the last several years have resulted from the tens of thousands of students who have gained access to pre-K as a result of the Preschool Development Grants program. While funding for the program was recently in doubt due to the Trump administration’s original plan to eliminate it, the recent omnibus bill passed by Congress and signed by President Trump keeps funding steady at $250 million.

It’s clear that much work remains to be done when it comes to both access to pre-K programs, especially for three-year-olds, and quality. It’s not enough for only three states to meet all of these minimum quality benchmarks. While progress has been made on these fronts since NIEER first started tracking state pre-K in 2002, it will take a continued push by state policymakers and advocates to ensure that children in all 50 states have access to a high-quality pre-K education.

With 36 gubernatorial races taking place in 2018 and even more state legislative races, could 2019 be the year for a renewed focus on and investment in pre-K and early education more broadly?

* Updated 4/20/18 with information about DLL section