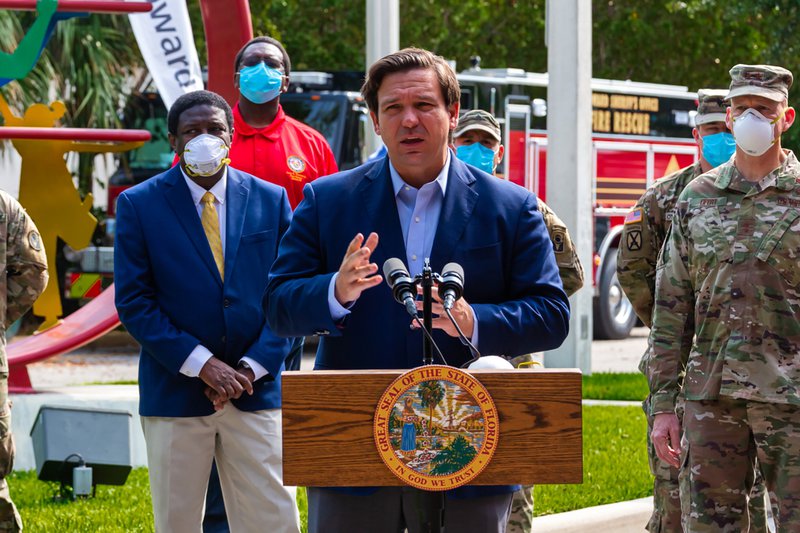 Since COVID-19 arrived on the United States' shores, many red-state mayors—Republicans and Democrats alike—have struggled to coordinate their responses with their state officials. We’ve watched mayors and local health authorities beg grudging governors to impose strict statewide social distancing mandates—only to be dismissed, overruled, or burdened with contradictory orders that make it difficult for localities with some of the most vulnerable citizens to enforce life-saving measures.

In Georgia, for instance, Tybee Island’s beach closures were overturned two weeks later by Republican Gov. Brian Kemp’s much-delayed statewide shelter-in-place order, which superseded local ordinances and allowed beaches to reopen. Tybee Island Mayor Shirley Sessions was one of many coastal city mayors to oppose the order and associated resumption of certain activities, noting that the island—which has two nursing homes and no hospitals—can’t afford any relaxation of social distancing.

Shocking as these disputes may be for Americans in general, longtime observers of state-local relations will be the first to say, “Yeah, that checks out.” The intergovernmental conflicts we see today mark a predictable extension of a decade-long, woefully underreported power struggle between conservative states and progressive-leaning cities—one which has significantly limited cities’ ability to solve problems for their residents.

While the need to correct this imbalance has been evident for a long time, the coronavirus pandemic has magnified both the health-related challenges cities face and the unique political obstacles they must often confront to address these challenges. U.S. cities are the primary engines of their respective state economies and, to a large extent, the world economy. According to a 2018 report from the United States Conference of Mayors, metro economies provided 99.5 percent of the United States' real GDP growth in 2017. Their combined output surpassed every non-U.S. nation except China, and the economic value generated by the 10 most productive metro economies exceeded that of 37 states.

Yet, as Fordham Law Professor Nestor Davidson notes, wealth alone doesn’t confer governing power. Whether cities are able translate economic success into policies equal to today’s most pressing issues depends on “the basic structure of their legal authority,” or “home rule”—which has unfortunately been collecting dust since 1953.

So, what is “home rule”? To understand, we need to go back to the U.S. Constitution. As Trump recently discovered, state powers derive from the 10th Amendment of the Constitution; meanwhile, there’s no mention of local governments, leaving local authority entirely in states’ hands. Home rule—a Progressive-Era innovation created to protect localities from excessive and counterproductive state interference—denotes a variety of state constitutional and statutory provisions that give local governments the authority to govern matters of local concern. But home rule provisions vary, reserving significant affirmative power to certain municipalities while requiring specific authorization from the state in others. Either way, “power is limited to specific fields, and subject to constant judicial interpretation."

Local authority has always been legally and politically vulnerable to the whims of the state. But as the gap between GOP- and rural-controlled state governments and Democratic-leaning city governments has widened over the last decade, the old home rule model no longer passes muster. One reason is the well-documented rise and spread of state “ceiling preemption”—where the state government sets a statewide maximum standard that its subdivisions cannot exceed—and “punitive preemption,” when preemption laws expose local officials or governments to penalties (such as fines, removal from office, or withholding of state funds) for noncompliance. These preemption laws often pass in reaction to the emergence of progressive city policies aimed at improving public health in denser, more diverse populations.

In this time of peak partisanship, and without modern home rule provisions, it’s common for state preemption laws (and the local laws that inspired them) to end up in the courts—a trend that reinforces Alexis de Tocqueville’s 1835 observation that “scarcely any political question arises in the United States that is not resolved, sooner or later, into a judicial question.” Preemption-related legal battles frequently drag on for months or years, leaving localities paralyzed by confusion over the laws’ validity and enforceability. State lawmakers and their special interest benefactors profit from this confusion.

Recently, the pandemic has presented new opportunities for Republican state governments to deploy preemption, intentionally or not, as an instrument of confusion. With so many red state mayors taking action in advance of their governors, late-arriving statewide orders have sent local authorities scrambling.

On top of general confusion, local governments fear the possibility of legal action if they maintain measures stricter than the state’s. On April 2, Florida Gov. Ron DeSantis, a Republican, reversed his position and mandated a 30-day statewide shutdown to combat the coronavirus. But the relief felt by city officials who had spent weeks urging him to take more aggressive action was short-lived. That same evening, DeSantis signed a second order that preempted any conflicting local measures—perhaps by accident. While the language of the second order typifies ceiling preemption, the governor claimed the order merely “set a floor” that mayors could choose to go beyond.

Orders from some of DeSantis’s peers posed similar issues, but with the addition of specific caveats and exemptions that governors claim in the sole interest of tackling the coronavirus. Critics point out that red state governors (including Ohio’s much-praised Mike DeWine) are using the crisis as a pretext to impose partisan or ideological preferences. Mississippi Governor Tate Reeves, for instance, issued an executive order on March 24 preempting local governments’ social distancing measures and redefining "essential business or operation” to cover gun stores, houses of worship, department stores, bars, Uber, car dealerships, construction services, and more.

Reeves’s order has drawn sharp criticism from local leaders, including Mayor Mario King of Moss Point. “I definitely think that he is 100 percent putting economic interests before people’s health,” King said of the governor.

Cities can attempt to fight back against ceiling and punitive preemption laws, which limit their ability to effectively address today’s most pressing economic and cultural issues. But obstacles abound. In addition to the confusion these laws leave in their wake, obsolete home rule protections give cities few reliable options.

Affirming de Toqueville’s insight about political issues inevitably becoming legal ones, the National League of Cities determined last year that the political problem of modern preemption called for an update to its 1953 “Model Constitutional Provisions for Municipal Home Rule.” This round, the legal question was how to best reframe the state-local relationship for the modern era. The resulting report, “Principles of Home Rule for the 21st Century,” presents four principles of constitutional home rule reform that can stand up to the contemporary needs of local government, and which merit serious consideration from the democracy reform community writ large.

Second, the Local Fiscal Authority Principle recognizes local governments’ power to tax and manage spending in ways that make sense for their communities (for instance, taxes on sugar-sweetened beverages, plastic bags, and e-cigarettes).

Third, the Presumption Against State Preemption Principle asserts that states seeking to preempt local authority should have a solid, general reason to do so, rather than targeting certain jurisdictions because a city law clashes with the state’s political or ideological preferences.

Lastly, the Local Democratic Self-Governance Principle defends a local government’s right to manage its own property and personnel. This principle addresses “punitive preemption,” whereby local officials can be held personally liable or removed from office because of a state-local conflict. It also extends state “speech or debate” immunity, currently guaranteed to state lawmakers, to local officials.

Today, partisan differences over social distancing underscore several familiar flaws in our political system, from gerrymandering to the rural-urban divide. But for those who have spent the last decade or more tracking the rise and spread of state preemption, the above failures of federalism also reveal the urgent need for a home rule makeover. City governments aren’t just America’s frontline defense against public health disasters; as the most trusted level of government, they also represent the most effective offensive force for positive change. In short, our cities can do better, and their residents—especially the marginalized communities of color most impacted by crises—deserve better.