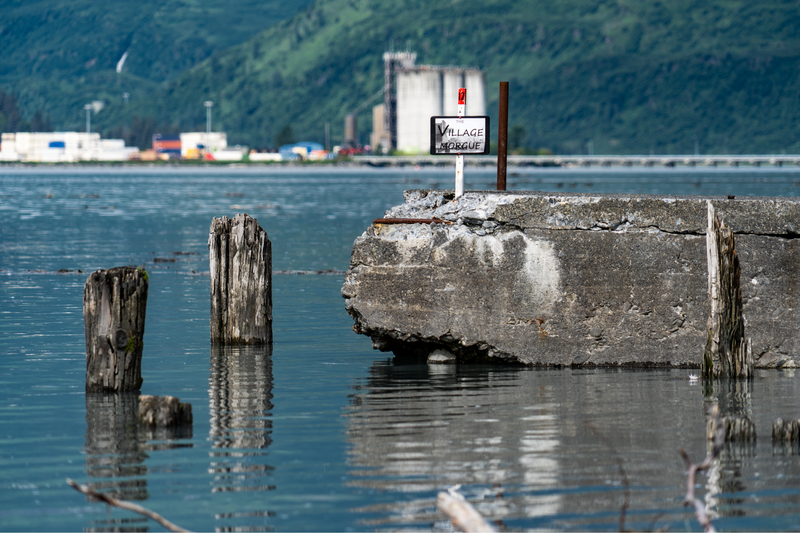 Imagine if your entire community began to disappear into the ocean. Many communities don’t have to. In June, severe flooding sent a majority of the Kwigillingok, Alaska community underwater — but this is not a new phenomenon, and it’s only getting worse.

Climate change is affecting the Arctic faster and more drastically than anywhere else on the planet. Most concerning for Alaskan villages and communities are increased erosion rates, thawing permafrost, decreases in sea ice, and changing climate conditions that shift food security. “​​The animals that we rely on, the plants and fish that we rely on are not coming at the same times of the year as they did before. And sometimes they aren't coming at all,” said Sam Schimmel, a St. Lawrence Island Siberian Yupik and Kenaitze Indian from Alaska and member of the State of Alaska's Climate Action Leadership Team.

In 2003, a Government Accountability Office study found that 86 percent of Indigenous villages — 184 in total — were affected by erosion and flooding. In May 2021, the Arctic Monitoring and Assessment Program published its annual climate change update, highlighting the increasing severity and seriousness of climate change, specifically on Arctic communities. For Schimmel, that means communities can’t get their food. “It means when the wintertime comes, we no longer have sea ice to protect our island from winter storms.” But there is still no framework that deals with climate change displacement and no set approach for cooperation across tribal, local, state, and federal levels to aid this process.

Indigenous communities in Alaska are being forced to consider full relocation through a policy known as “managed retreat,” which involves proactive movement of people, structures, and infrastructure out of harm’s way before disasters occur. Some communities, such as the village of Napakiak and many other villages, have determined that relocation is necessary, a decision that comes with heavy financial and cultural costs. Collaboration is key and managed retreat policies must better take into account property rights and land use issues.

Several Alaskan communities — such as the villages of Newtok and Shishmaref — have already begun engaging in managed retreat, a long-term process that takes many years and includes tribal governments, community leaders, and residents. It’s an adaptation strategy of last resort, largely because of the high costs and negative cultural side effects resulting from community displacement. According to Schimmel, “Climate change is making it hard for us to practice our traditions, which is resulting in our youth and our communities being disconnected from who we are… our languages are being eroded just like our coastlines.”

An Alaska Basement Erosion Assessment conducted by the U.S. Army Engineer Corps found that 12 of 31 identified villages threatened by climate change have decided to relocate, or are exploring relocation options. The village of Newtok in southwestern Alaska is one of the most extreme cases of managed retreat resulting from coastal erosion. Due to extreme rates of permafrost degradation — around 70 feet of land erodes per year — the entire village is planning a relocation to Mertarvik, a new uninhabited site.

In 2006, they established the Newtok Planning Group, bringing together tribal, local, state, and federal representatives to better plan the relocation efforts. Now, the cost of relocation is estimated at around $100 million. But beyond the money, the effort entails an unprecedented level of cooperation between governments. By 2019, a third of Newtok’s residents were given the green light to move.

Other communities were not as lucky as Newtok. The residents of Shishmaref, an Indigenous town on the Bering Strait, voted in 2002 to relocate the village. But despite the increase in severe erosion rates and flooding over the past decades, the town has neither federal funding nor economic assistance to physically move.

There are currently no governance processes that help determine if and when communities need climate-related relocation, and what kind of best practices to account for changing property rights. This makes managed retreat extremely complex.

If communities do not choose or cannot afford a full-scale relocation, they must develop mitigation or adaptation plans in the meantime.

The clearest lesson is that unprecedented levels of cooperation are needed across tribal, local, state, and federal levels. The next critical step is creating a modular framework for relocation. A one-size-fits-all approach doesn’t work anywhere, particularly not in a place like Alaska, and adaptation needs to be facilitated by federal and state dollars. This kind of modular framework should be led from the bottom-up, existing as a pipeline through which communities could acquire funding. In the United States, there is no national framework for citizens displaced due to long-term effects of climate change.

UPTEMPO: The United States and Natural Disasters in the Pacific (Resource Security): Natural disasters are increasing in the Pacific region due to climate change. We detail the implications of an increasing demand for military humanitarian and disaster relief missions on U.S. Indo-Pacific Command’s plans, personnel, platforms, and relationships in the region.

The Case for ‘Managed Retreat’ (Future of Land and Housing): Yuliya Panfil argues in Politico for the need for the United States start a national dialogue on managed retreat and to proactively move residents away from the coasts as sea levels rise.

Heat Map: All Climate Politics is Local … and Global (Resource Security): In this podcast, we look at how Americans are actually tackling climate change, from city aldermen to CEOs. These people tell what’s working, what’s not, and what local and agency leaders want to see from the president of the United States.