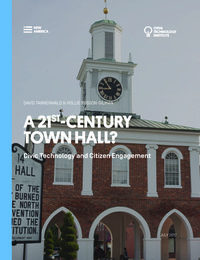 Throughout U.S. history, government officials, community organizations, and private individuals have wrestled with how best to engage citizens in the democratic process in general and governmental decision-making in particular. Traditionally, there have been a number of means—such as town meetings, voting, petitions, financial contributions, writing letters to the editor and opinion pieces, and demonstrating—to accomplish these goals. (1, 2) Now, however, in an era in which trust in government has eroded, political dialogue has become extremely polarized, and voting rates have ebbed, some believe that we need to find new ways to bolster citizen engagement.(3) “It falls to each of us,” said President Obama in a farewell address that emphasized the multifold threats to U.S. democracy, “to be those anxious, jealous guardians of our democracy; to embrace the joyous task we’ve been given to continually try to improve this great nation of ours. Because for all our outward differences, we share the same proud title: Citizen.”(4)

“A 21st-Century Town Hall? Civic Technology and Citizen Engagement” introduces students to the field of civic technology and the possibility that it could help to amplify citizen engagement. Rather than providing an exhaustive academic study of this topic or an in-depth exploration of a single organization, the case begins with a broad overview of the field (and several of the debates affecting it) and then contains a series of vignettes about three organizations in this space: the City of Chicago, Neighborly, and the City of Boston’s Mayor’s Office of New Urban Mechanics.

In exploring these diverse topics and organizations, the case—which draws on secondary sources and interviews with civic technologists and experts—aims to stimulate discussion around three core questions. First, what is civic technology, and what are some of the core forces, tensions, and debates shaping the field? Second, what are some of the most important considerations for civic technology organizations that are aiming to engage citizens in the democratic process and governmental decision-making? Third, where does civic technology—and, along with it, our conceptions of citizenship and engagement—go from here?

The case is part of a New America strategy, titled “Bridging the Tech-Policy Divide,” to create a curriculum focused on the intersection of information technology and public policy that can be federated at schools across the country. The first case study in this curriculum, “Riding the Wave,” detailed how Congressman Seth Moulton’s 2014 campaign leveraged social media to advance its efforts; in other words, an example of how information technology enabled an organization to achieve its goals. By contrast, the second case, “Cascades: The Anonymous Hack of HBGary,” illuminated how modern technology can just as easily facilitate an organization’s downfall. Finally, this third case delves into the yet-to-be-determined effects of civic technology on citizen engagement. The implication is that students and policymakers must do more to sharpen their understanding of technology so that they can clarify its impact and leverage its positive impacts while mitigating its negative effects.

We hope that this case study—including the other materials in this curriculum—help the public policy community realize this vital objective.

[1] Micah Sifry, “Civic Tech and Engagement: In Search of a Common Language,” TechPresident, September 5, 2014, available at http://techpresident.com/news/25261/civic-tech-and-engagement-search-common-language (accessed on April 13, 2017).

[2] This blog post draws on and includes material from the authors’ case study on civic technology as well as their blog post titled, “Cascades: The Anonymous Hack of HBGary,” New America, May 18, 2016, available at https://www.newamerica.org/oti/blog/cascades-anonymous-hack-hbgary/ (accessed on July 22, 2017).