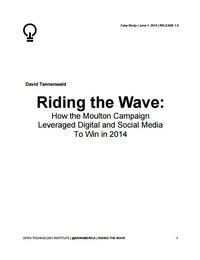 In March 2014, Seth Moulton, then a congressional candidate in Massachusetts’ sixth district, convened his staff for one of the most important meetings of his campaign to date. Eight months earlier, Moulton had announced that he would run against Representative John Tierney in the Democratic primary; but with limited funds, he and his team—which then consisted of a handful of paid staff-members and consultants—had only recently done an in-depth poll. Now they had gathered to receive the results of a benchmark analysis performed by the Mellman Group, a Washington, D.C.-based polling firm. The picture was grim: Tierney enjoyed a 75% favorability rating; what’s more, the nine-term incumbent led Moulton, then a 35-year old Iraq War veteran with no political experience, by more than fifty percentage points.

At first, some staff found the news discouraging. Entering the campaign, they had realized that Moulton’s candidacy was a long-shot (in Massachusetts, an incumbent had not lost in a primary since 1992); now, however, as Tom Rossmeissl, a director at Trippi & Associates, recalled, it seemed like they needed a “hail mary pass” to win. The team’s disappointment gave way to renewed determination when they heard their candidate’s response: as Rossmeissl recalled, Moulton simply said, “We’re going to pull this off.” This impressed, Rossmeissl added, because other young candidates might have said, “It’s not my time.” Moulton remained committed and confident, so his staff did, too.

To win, the campaign would need to blend strategy, hard work, and luck. As was often true, its prospects would hinge heavily on a series of television advertisements several weeks before the primary. With that blitz months away, Moulton’s team used digital and social media—ranging from mainstream outlets like Twitter and Facebook to sophisticated tools like Fanatical, a software program that helps organizations expand their digital following—as a way to disseminate and amplify its message. The campaign was initially drawn to these platforms because of their price: whereas a television advertisement cost tens of thousands of dollars, the campaign could promote a Facebook post for $30 (or less). Over time, the staff realized that employing modern technologies resonated with their depiction of Moulton as a fresh face. More importantly, social media provided a tool to target high-yield donors and critical demographics. By late August, the campaign was employing at least nine digital media platforms.

Even as they leveraged these technologies, campaign officials feared tradeoffs and risks. While it was easy to use Twitter or Facebook, mastering these and other media required time and expertise. In an insurgent campaign with finite resources, every hour and dollar devoted to digital came at the expense of something else. Of greater concern was that an off-tune Tweet could counteract the campaign’s message about Moulton’s leadership or even worse that an off-color post could go viral and torpedo the campaign. Most fundamentally, they worried about whether this approach—which led to dialogue with unpredictable and sometimes antagonistic followers—was compatible with Moulton’s commitment to running an upbeat campaign.

In short, Moulton and his team faced numerous questions about their digital and social media strategy. Could they develop the technical expertise to harness these media without sacrificing other priorities? Would the platforms reinforce their message? Would these techniques further or impede the democratic process?