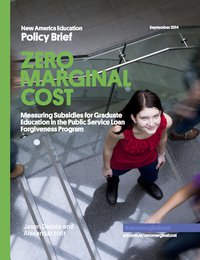 New America’s Education Policy Program today released a new higher education policy brief, “Zero Marginal Cost,” investigating the consequences of the federal Public Service Loan Forgiveness (PSLF) program for graduate student borrowers. By pairing debt levels for different types of graduate degrees with data from a major national income survey, the paper’s authors, Jason Delisle and Alexander Holt, estimate the debt load beyond which students entering ten public and nonprofit professions can continue to borrow money from the federal government at no additional cost. They find that borrowers with typical levels of debt, who go on to earn typical incomes, are likely already accruing loan debts beyond this ‘Zero Marginal Cost Threshold,’ or ZMCT, in nine of the ten professions analyzed.

“Our analysis shows that students who know that they will likely be eligible for PSLF actually have a large incentive to borrow more, and be less price sensitive in their graduate and professional education choices,” explains Jason Delisle, director of New America’s Federal Education Budget Project, and coauthor of the paper.

The paper also shows that PSLF provides substantial benefits to borrowers with typical debt loads who earn median or even high incomes for their professions. For example, a teacher with typical loan debt ($42,000) who earns a typical income, obtains forgiveness of $41,000. A lawyer with typical debt, going on to earn typical income, stands to receive about $147,000 in forgiveness – about ten times what a Pell grant recipient receives over the course of a four year undergraduate degree.

“As the public begins to question the value of overpriced graduate and professional degrees, these policies could send exactly the wrong message to prospective students,” says Alexander Holt, coauthor of the paper, and a policy analyst in New America’s Education Policy Program. “Instead of putting pressure on graduate schools to only offer economically worthwhile professional degrees, these policies encourage the opposite.”

The findings of the paper stand in contrast to the widespread belief that borrowers collecting large benefits under the programs will be rare, says Delisle.

“While many people are sympathetic to helping finance the education of social worker or teachers, this analysis shows that the PSLF program has gone far beyond what anyone intended it to be. It should soon be obvious to these students, and their schools, that these degrees will be free for many who pursue them, removing any check on what schools can charge and what students choose to borrow.”

“Meanwhile, law graduates often stand to receive tens or hundreds of thousands of dollars of loan forgiveness, while earning incomes that most Americans would consider too high to qualify for government benefits.”

A copy of the paper can be downloaded from edcentr.al/zeromarginalcost.