The News Keeps Getting Worse for Low-Income Students 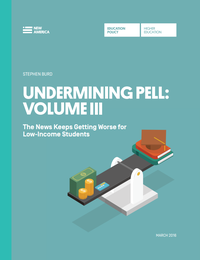 In the face of steep state budget cuts over the past decade, public colleges are increasingly adopting the enrollment management tactics of private-colleges – to the detriment of low-income and working-class students. In fact, nearly half of public four-year colleges examined now leave the most financially needy students on the hook for more than $10,000 per school year. Back in 2010-11, only about a third of these public institutions charged the lowest-income students that much.

In the new report released today, “Undermining Pell III: The News Keeps Getting Worse for Low-Income Students,” Stephen Burd, Senior Policy Analyst with New America’s Education Policy Program, examines U.S. Department of Education data showing the average net price that students from low-income families attending 1,400 four-year public and private colleges paid in the 2013-2014 academic year. The average net price is the amount of money that students and their families have to pay after all grant and scholarship aid is deducted from the listed price.

Accompanying the research is a data visualization tool that allows users to view private and public institutions featured in this report—based on the percentage of their student population that receives Pell Grants and the average net price those students are charged per academic year.

While the problem is not as extreme among public colleges and universities, it continues to rapidly escalate. Over the past two decades, there has been a fundamental shift in the admission practices of many public universities. State disinvestment and institutional status-seeking have worked together, hand-in-hand, to encourage public institutions to use their institutional aid dollars strategically in order to lure affluent students to their campuses in order to climb up the rankings and increase their revenue. As a result, fewer institutional aid dollars are available for students who come from less privileged backgrounds.

“Overall, too many four-year colleges, both public and private, are failing to help the federal government achieve national college access goals,” Burd said. “They are, instead, creating barriers that could stymie the educational progress of low-income students or leave these students with mountains of debt after they graduate.”

Some of the findings in the report include:

In the paper Burd argues that a federal solution is needed to push colleges to become more socioeconomically diverse and to hold schools accountable for making college affordable for the low-income students they enroll. Burd proposes a “carrot-and-stick” approach to help schools keep down the net prices of the low-income students they serve. The plan would offer Pell bonuses to financially strapped public four-year colleges where Pell Grant recipients make up over 25 percent of the student body and graduate at least half their students school wide. Wealthier colleges that charge financially needy students high net prices would be required to match at least a share of the Pell dollars they receive.

“It’s time to put an end to the merit-aid arms race and to ensure that colleges live up to their commitments to serve as engines of opportunity, rather than as perpetuators of inequality,” Burd said.