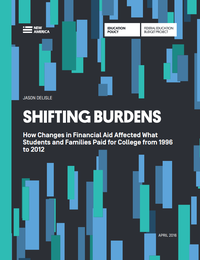 College financial aid award letters give families a sense of what college costs after factoring grants, scholarships, tuition discounts and tax benefits. What is less clear is the broader picture of how much money different types of students receive from a variety of financing sources.

In the new report, “Shifting Burdens: How Changes in Financial Aid Affected What Students and Families Paid for College from 1996 to 2012,” we take a comprehensive look at what students paid for school and what trends have emerged, using data from the National Postsecondary Student Aid Study.

This bottom-up analysis of student-and-family-level data shows how the colleges that students chose to attend affects financing trends. His analysis also looks at the share of college costs each financing source covers, revealing which sources are growing faster than others or whether costs are growing at the same pace as financial aid.

The report shows how the share of college costs that the federal government financed rose significantly and consistently from 1996 to 2012 for nearly all income groups and school types.

“The analysis puts into sharp relief how the role of federal aid, the role of state funding, and the role of student debt have changed markedly since 1996 in how we finance college in this country. And seeing those changes by family income and school types uncovers some surprising findings,” said Delisle.

Some other findings in the report include:

The full report can be found here.