A Closer Look at Payroll Withholding for Federal Student Loans 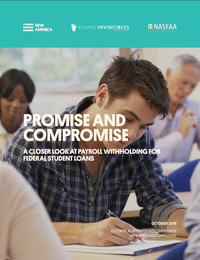 New America’s Education Policy Program today released Promise and Compromise: A Closer Look at Payroll Withholding for Federal Student Loans, the second in a series of briefs examining the case for and against automatic income-based student loan repayment through payroll withholding.

Recently a variety of policy experts have suggested that employer withholding could work in conjunction with income-based repayment (IBR) to decrease burdensome monthly payments as well as the high rate of student loan default and non-repayment. However, existing proposals are often short on details. Any successful policy plan must address a series of implementation issues, including:

Our first brief, The Case for Payroll Withholding, found that only automatic IBR coupled with employer withholding would adequately simplify the student loan repayment system through automation and simultaneously mitigate risk by tying repayment to present income. The brief also warned that automatically enrolling borrowers into IBR is extremely difficult to implement, and any haphazard approach could make the repayment system worse.

New America, the National Association of Student Financial Aid Administrators and Young Invincibles assembled a variety of experts, advocates and stakeholders to discuss the viability of payroll withholding and the potential challenges involved with implementation. The consortium also discussed the proposal with students in the Washington, D.C. metropolitan area. The result of these discussions is a report that highlights the pros and cons if such a system were implemented, and incorporates feedback from the different stakeholders on different questions raised in the report.

“The idea of payroll withholding for federal student loans holds great promise,” said Alexander Holt, a policy analyst with New America’s Education Policy Program and one of the authors of the report, “but policymakers need to think carefully about the costs and tradeoffs associated with such a massive change to the student loan program.”

Income-based student loan repayment through payroll withholding may appear on the surface to be a win-win situation for borrowers and the government, but the fine details about how this plan works on all levels and how to best implement it can not be ignored.

The full report can be accessed here.