How Public Universities Use Merit Aid to Recruit Nonresident Students 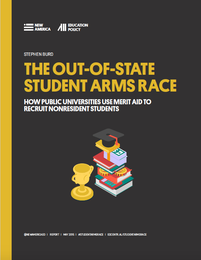 Almost seven out of ten public colleges and universities provide so-called “merit aid” to at least five percent of freshmen who lack financial need, according to a new report from New America’s Education Policy Program. The report finds that about half of these institutions provide merit aid to at least 10 percent of freshmen without financial need, and nearly one in five provide this aid to 20 percent or more of their non-needy freshmen.

The report, entitled “The Out-of-State Student Arms Race: How Public Universities Use Merit Aid to Recruit Nonresident Students,” examines the use of non-need-based aid at 424 public four-year college and universities. The study reveals that this practice is not limited to the flagships and major research universities. In recent years, many state regional colleges and universities have been playing the merit aid game as well.

Using publicly-available information from the Common Data Set, the report identifies those public colleges that are the biggest players in this game and describes the factors that have led to what has become a widespread and entrenched practice. In addition, the report reveals the following:

“For generations, public colleges and universities provided a low-cost higher education to students in their home states,” explains the report’s author, Stephen Burd. “Those that distributed institutional financial aid mostly gave it to students with the greatest financial need. As a result of these policies, these institutions offered students from low- and moderate-income families a gateway to the middle class.”

But over the last 20 years, state disinvestment and institutional status-seeking have worked together, hand in hand, to encourage public colleges and universities, to adopt the enrollment management tactics of their private-college counterparts. For many of these schools, that has meant using their institutional aid dollars strategically in order to lure affluent out-of-state students to their campuses in order to climb up the rankings and increase their revenue.

“As a result, these institutions are awarding fewer institutional aid dollars to in-state students who come from less-privileged backgrounds. The trend is also alarming in light of recent research that has found that the more out-of-state students a public research university enrolls, the fewer seats it has left for low-income and minority students,” says Burd.

In other words, by bringing in more and more wealthy nonresident students, these colleges are increasingly becoming bastions of privilege.

“Somewhere, Justin Morrill, whose legislation during the Civil War laid the groundwork for public higher education, is turning over in his grave,” Burd says.