From Crawling to Walking 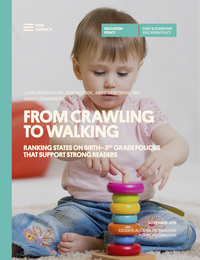 Right now only about one-third of all children attending school in the United States can read proficiently by fourth grade. The numbers are even more dismaying for our most vulnerable students. How can state policymakers lessen the achievement gap and improve literacy outcomes for all children? A new report from New America’s Education Policy Program examined the state of early education policy in all 50 states and Washington, DC and offers a framework for moving forward.

From Crawling to Walking: Ranking States on Birth- 3rd Grade Policies that Support Strong Readers, ranks states on 65 indicators in seven policy areas. The report found that most states are not taking a comprehensive approach when it comes to developing children’s literacy skills. Accompanying the research are interactive maps of state progress displayed via New America’s data visualization and policy analysis tool, Atlas.

Along the marathon course towards life success are several checkpoints for all children: kindergarten readiness, third grade reading proficiency, and of course high school graduation. States can help or hinder students in reaching these points. Right now, 11 states are crawling toward making sure children are able to read well by third grade. The majority of states, 34 and Washington, DC, are toddling. Only five states are walking: New York, Oklahoma, West Virginia, Connecticut, and Wisconsin. No state is running.

“Even New York, the highest scoring state, only earned the equivalent of a ‘C’ in letter grades,” says Laura Bornfreund, director of New America’s Early & Elementary Education team and lead author of the report.

Some of the highest scoring states might come as a surprise, such as West Virginia, which doesn’t always rise to the top on most state rankings. The report explains that West Virginia stands out because of its robust state pre-K program that includes basic quality indicators; it also requires districts to offer full-day kindergarten under state statute.

From Crawling to Walking measures states on a broad set of policy indicators that can help ensure children are on track to read on grade level by the end of third grade. For instance, states that prioritize the preparation and development of teachers of infants, toddlers, preschoolers, and the early elementary grades, as well as leaders of elementary schools and child care centers, are in a better position to meet this goal. But while a focus on educators is salient, it’s not enough on its own. States must also have in place:

The majority of states fall into the Toddling category, meaning they are meeting some indicators but clearly lacking on others. Finally, the report identifies the 11 states that have the most work to do--Kansas, Kentucky, Arizona, North Dakota, Utah, Nevada, Idaho, Wyoming, South Dakota, New Hampshire, and Montana-- as Crawling. The majority of states in this category do not have public pre-K programs and do not require districts to provide full-day kindergarten.

This scan of state policies finds that most states are far from the kind of unified alignment that fosters a strong early learning continuum for children. According to the report, “Several states are tackling pieces fairly well, but real progress will occur when states begin to knit those discrete policies together.”

The map on page 19 has been updated to include Indiana, Virginia, and Wisconsin (all scored 16), as well as scores of 19 for Oklahoma and 16 for Florida.