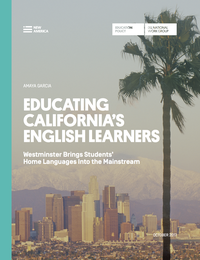 On the first day of school, Soledad Vidaurri went to register her brother’s children in their local school in Westminster, CA but was told they could not be admitted due to their lack of English language skills. The courts would later find Westminster Elementary School had denied Gonzalo, Jr., Geronimo, and Sylvia Mendez admission based on the fact that they had a Spanish surname and a dark complexion.

At the time, 1944, the exclusion of Mexican-American students was a common practice in Southern California, where school district after school district constructed “Mexican” schools in response to pressure from white parents. This practice was also part of a widespread effort to “Americanize” Mexican children. These children were forbidden from speaking Spanish at school and largely taught basic skills. As Sylvia Mendez reflected in an Education Week video about her experience in one of these schools, “we were being taught how to be good maids, we were being taught how to clean, how to sew, how to quilt. We weren’t being taught academics.”

After appealing to the local school board and failing, Vidaurri’s brother Gonzalo Mendez and his wife Felicíta decided to take action. In 1945, Mendez joined with four other Mexican-American fathers to file a lawsuit against four school districts (Westminster, Garden Grove, El Modeno, and Santa Ana) using the argument that segregation was a violation of their rights under the U.S. Constitution’s 14th Amendment. A year later, Federal District Court Judge Paul J. McCormick ruled in favor of the plaintiffs and wrote in his decision that “a paramount requisite on the American system of public education is social equality. It must be open to all children by unified school association regardless of lineage.”

The school districts appealed McCormick’s decision, only to lose again. Two months later, in June 1947, California Governor Earl Warren (who would later serve as a Supreme Court justice during the Brown v. Board of Education case) repealed segregation in the state’s schools. Seventy years later, Mendez v. Westminster continues to be an important legacy in the Westminster School District, a K-8 district where nearly 50 percent of students are English learners (ELs) and the majority of students are Latino and Asian. The district has undertaken major initiatives in recent years to advance equity for English learners, as guaranteed by civil rights law, with major investments to develop students’ emerging multilingualism at school. In particular, Westminster made strides in prioritizing the needs of English learners with the creation of a district-level Office of Language Acquisition in 2014, which has been instrumental in its efforts to develop and implement dual language immersion programs in Vietnamese and Spanish.

California is on the cusp of a potential resurgence in bilingual education thanks to the recent passage of Proposition 58, which scales back components of the state’s English-only law and provides districts with greater flexibility in providing bilingual instruction for all students. This paper explores Westminster’s process in designing and implementing two distinct dual language immersion programs in the span of two years.