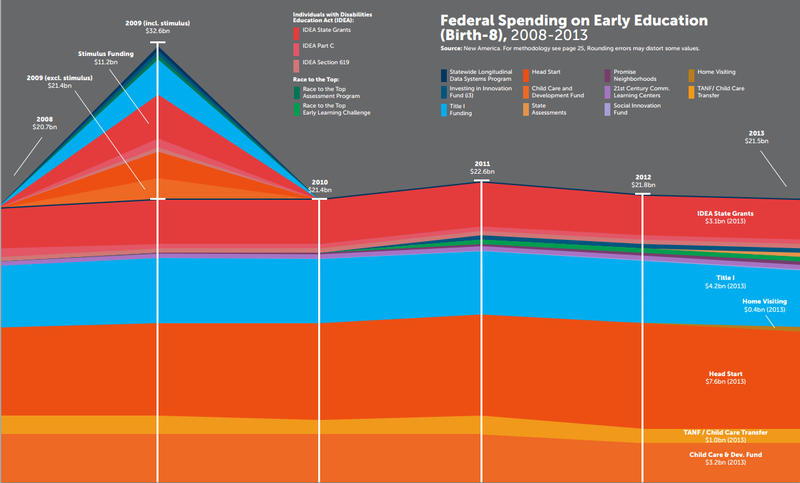 Last week, the Senate Health, Education, Labor, and Pensions (HELP) Committee held a hearing on the Strong Start for America’s Children Act, a bill that would help expand state pre-K programs. While there is support among Senate Democrats for the bill, there is less among Senate Republicans. Instead, Senate Republicans want to streamline existing programs and give states much more flexibility in their provision of birth-to-5 early education programs.

Senator Lamar Alexander (R-TN), ranking member of the HELP Committee, called the Committee’s attention to a February report from the Government Accountability Office that was discussed during a House Education and Workforce Committee hearing on early care and education programs. The report cites 45 programs that allow funds to be used to support services for children birth-to-5. During the hearing, Alexander argued that, “Total federal government spending today [on early childhood programs] is more than $22 billion a year—about the same amount that the U.S. Department of Education spends on K-12 education through the Elementary and Secondary Education Act.” He went on to say he believes there are better ways to spend this money and that we don’t need one more program with the Strong Start Act.

Not so fast. The 45 programs listed include ones such as Transitional Housing Assistance for Victims of Domestic Violence and the National Farmworker Jobs Program. Many of the programs cited have a number of varying purposes and missions, touching many more policy areas than just early care and education. The National School Lunch Program, for example, provides meals to low-income children--and while being hungry can be a huge impediment to learning, it can hardly be said that that program’s dollars are being spent in the same way as the Title I Grants to Local Educational Agencies program, which funds classroom resources and teachers for low-income PreK-12 students.

Alexander noted that the report identifies a dozen federal programs as being explicitly focused on early education or child care. All told, the programs cost the federal government $14.2 billion in fiscal year 2012. But even in citing that narrower list of programs, both Alexander and the GAO are conflating very different programs--with very different missions.

Seven of those 12 programs are housed in the Department of Education; three in the Department of Health and Human Services; and one each are in the Department of the Interior and the General Services Administration. The State Fiscal Stabilization Fund, which was designed as part of the 2009 American Recovery and Reinvestment Act (the stimulus bill), was an emergency appropriation meant to prevent states from laying off teachers--and now that the money’s run out, it’s not affecting education at all anymore. The Child Care and Development Fund provides vouchers for child care to low-income families, while the GSA’s much smaller version simply funds workplace child care for federal employees. Head Start is a pre-K program for low-income 4-year-olds; Child Care Access Means Parents in School is a higher education program designed to smooth postsecondary studies by financing subsidized child care. 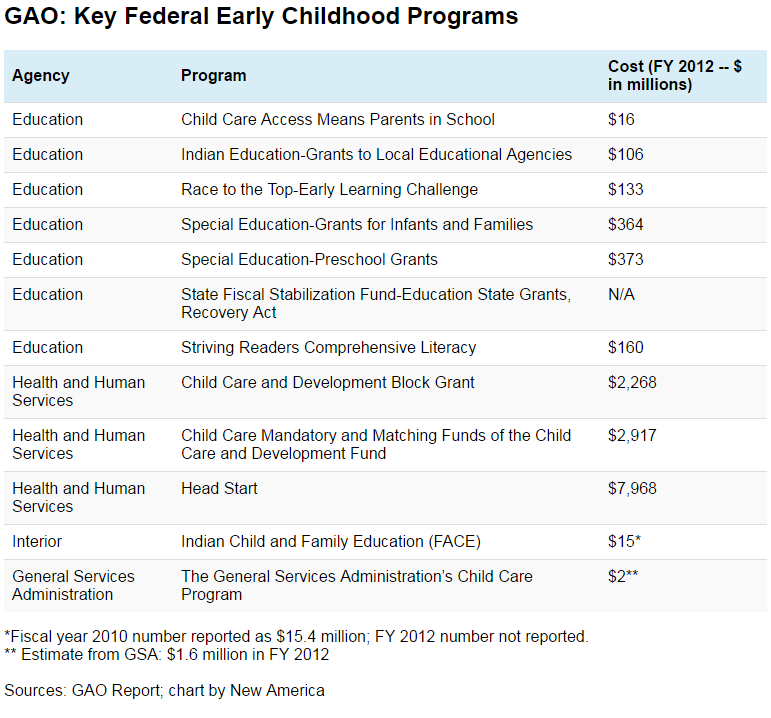 The GAO’s list of 45 programs is at once too broad (Donation of Federal Surplus Personal Property?) and too narrow (where are early educational data systems and home visiting?). In our effort to understand trends in funding for early education programs during the recession, we charted our own take on early educational spending from 2008 to 2013 in Subprime Learning: Early Education in America Since the Great Recession. In particular, we tried to note in our report all of the key programs that touch early education.

There’s a lot of overlap between our list and the GAO report--special education preschool grants and grants for infants and families, Race to the Top--Early Learning Challenge, Head Start, and the Child Care and Development Fund, to name the big ones. But we also included many of the PreK-12 programs that are used, in many cases, for young children--especially now that about 60 percent of school districts offer pre-K programs. Those programs include special education state grants, Race to the Top--Assessment, kindergarten entry assessments, Statewide Longitudinal Data Systems, Investing in Innovation, 21st-Century Community Learning Centers, Social Innovation Fund, and Home Visiting, plus the portion of child care spending reapportioned by states from the federal Temporary Assistance for Needy Families program. We adjusted spending for each to account for the birth-to-5 and birth-to-8 portions of the program. Using those figures, we estimated that Congress appropriated a total of $18.0 billion towards programs for children age 5 and under in fiscal year 2012, and $21.8 billion on programs for children ages 0-8.

Alexander intends to propose new legislation that would streamline federal early care and education programs, giving states more flexibility in how to spend federal dollars and offering parents more choice. He suggests the Child Care and Development Block Grant reauthorization bill that passed the Senate last month is one example of what would work better. The bill expands some safety and quality requirements for providers who choose to accept the subsidies. (For more on CCDBG, read this post about the recent legislation.)

We agree with Alexander’s basic argument: There are a number of federal programs that have a hand in providing services to children, birth-to-5, and their families. In most cases, these programs are not coordinated in any way and in some cases they may be duplicative. There is definitely room for improvement. But he’s missing an important point: there’s a difference between care and learning. And most of the federal investment right now is in the care of young children, not in their learning and development. It is important for parents to have access to child care, as well as other supports for their families, so they are able to work or get additional education. The Strong Start Act is different. It focuses on learning, as well as on improving low- and moderate-income children’s access to high-quality pre-kindergarten programs.

Giving states strings-free money and leaving it to them to figure out how to meet families early care and education needs won’t work. There’s ample research signaling what works in early education and the federal government has an important role in helping to leverage states’ efforts to provide high-quality opportunities. So while, yes, the federal government should design better connections and stronger coordination among the many programs with which it helps support early childhood, it should also recognize and expand its role in helping states improve  access for all families to high-quality early educational opportunities.