In Time for Spring Training, Baseball Brings People back to College 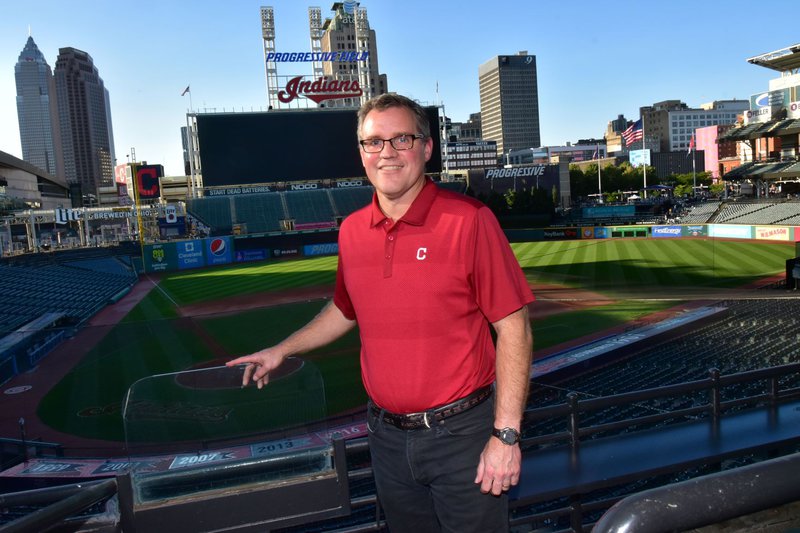 In Cleveland, it doesn’t matter if it’s Thursday.

If the Indians are in town, it’s time for the grownups to play hooky. In their red T-shirts and baseball caps, fans of the team pack the trains, heading towards Progressive Field, with Cleveland’s skyscrapers near enough for envious office workers to almost field a fly.

Doesn’t matter either if the season ended as this year’s did, with mid-September’s hope for a postseason spot dying one sad game after another.

Win or lose, the Indians never have a problem recruiting employees – drawn by the romance of the game, plenty of college graduates are eager to work in baseball.

So why would someone like Brian Barren, president of business operations for the team, get involved with a program to help adults who left college come back – maybe for a degree, maybe for a certificate?

“I’m a big believer that education is transformational and provides the platform for changing the trajectory of someone’s life,” Barren said, sitting in one of the stadium’s suites.

Barren serves on the board of College Now Greater Cleveland. While he came to the board with an interest in mentoring Cleveland’s teenagers as they move into college, “the adult piece has been fascinating for me personally,” he said.

College Now is part of The Graduate! Network, a national collaboration of organizations dedicated to helping adults return to college.

In his position, Barren has something that most of College Now’s board members don’t – the ability to use Cleveland’s love of baseball to influence the influencers among Cleveland’s business community so they will step up to the plate to further the education of Cleveland’s citizens.

In Ohio, just over one in four adults has a bachelor’s degree or higher. One in five adults are people who began college, but didn’t finish. College graduates typically command higher earnings. But adults who don’t finish don’t get the earnings bump that comes with a diploma. Worse, they are often saddled with college debt they can’t afford to pay.

Meanwhile, the labor market is tightening, and jobs are going unfilled.

Northeast Ohio, with its population of 4.3 million, should be producing 37,600 college graduates a year, based on national averages. Instead, only 31,300 earn diplomas, according to the 2019 Aligning Opportunities report by Team NEO, the region’s business attraction organization.

In information technology, for example, there were 12,661 openings for computer workers of all types in 2018, including 5,388 entry level positions. Meanwhile, in 2017, the region’s post-secondary institutions awarded a total of 2,216 certifications, leaving 3,172 positions begging.

Northeast Ohio retains a strong manufacturing base – for now. But labor shortages threaten it. In manufacturing, there were 2,063 entry level openings for skilled metal and plastic workers, including welders, but only 106 certificates awarded – a talent gap of 1,957 positions.

The Graduate! Network’s national Bridging the Talent Gap* research shows that most businesses don’t have active partnerships with local learning institutions. Yet, 97 percent of businesses surveyed for that report in Cleveland said they’d be interested in developing a partnership.

College Now can help, said Julie Szeltner, senior director of adult programs and services. It has relationships with local learning institutions to facilitate the conversation.

Companies win with a better-skilled workforce. Employees win because their credentials can command higher wages. Significantly, the region wins in terms of competitiveness. Szeltner’s boss, College Now’s chief executive officer Lee Friedman, puts it this way: “It has to happen in Northeast Ohio or else we’re going to go out of business.”

So, what position do Brian Barren and the Cleveland Indians play?

It’s up to Barren to influence not only the team but the entire team of Cleveland’s business community. Barren knows them well, because many rent suites at the ballpark or buy sponsorships. He serves on a College Now subcommittee to build better networks “with key leaders in the business community” to connect them to College Now’s resources.

“Very tactically, one of the things that we do is host a College Now board meeting here for an Indians’ game. We generally have high attendance on that specific game day,” he said. “And it is an opportunity.” Some of the stadium crew working at Progressive Field those days will eventually become year-round part-time employees of the Indians, working the same type of job, but at a supervisory level, with other tasks during the off-season. The team employs about 200 full time.

“We're hiring people that are actually moving through that progression,” Barren said. “It's intentional, it's methodical, and it's planned. Just like baseball players have a minor league system, we look at that as our minor league or our farm system for the development of people to enter the business side.”

For example, he said, he referred a custodian to College Now, who helped with counseling and enrollment. Could that custodian, with the right degree, ever become an accountant for the Indians?

For anyone who wants to go back to school – including the team’s employees – College Now wants to provide support and encouragement. Unlike baseball, where one team always loses, in College Now’s ball field everyone wins – the adults returning to school, the colleges filling classrooms and the employers desperate to find the right hires.

And so, Barren is stepping up to the plate – making his pitch to his fellow business people. “If employees don’t have the basic tools, because they are under-educated, they are actually holding back the [entire] workforce in Northeast Ohio,” he said. “The challenge these companies in Northeast Ohio have is that they can’t keep up with the demands of their customers. Then it’s a vicious cycle.”

On any game day, Barren can track the local economy simply by walking into the stands where the cheapest tickets sell for $15.

“The socioeconomic viability of Northeast Ohio is critically important to the success of our professional sports teams, particularly in baseball,” he said.

“If [our fans] don’t have a good enough job, they can’t come to games,” Barren said. “Our attendance will be lower. Our revenue will be lower. And with no salary cap, our team payrolls will be lower. It’s increasingly more difficult to compete against big market teams that have different resources and capabilities than small market teams like Cleveland.

“What are we going to do to address that?” he asked rhetorically. “We’re going to try and find a way to better educate our people, so people can buy a ticket.”

*The Bridging The Talent Gap survey was funded by Walmart