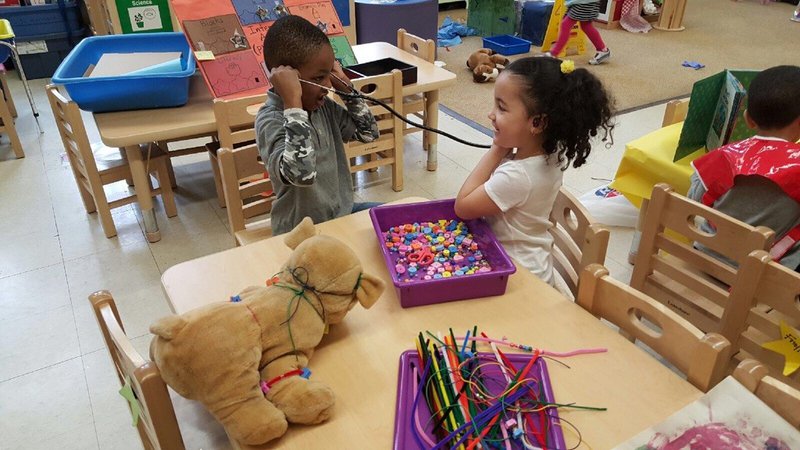 Over the past decade, I have seen a flurry of eye-opening studies on how young children learn—studies that push back against the traditional vision of pre-K as a classroom space for children to recite the A,B,C’s or sit quietly with hands in their laps. This month, in the October issue of Scientific American, I bring findings from multiple studies together in one feature article, offering scenes from classrooms I’ve visited as well as researchers and teachers I’ve interviewed over the years. The piece, “How to Prime Preschoolers for Success,” describes how these findings for early childhood (kindergarten too) are leading to significant changes in the way teachers are trained to do their jobs.

The article starts this way:

Dawn Bradley, an early-childhood teacher, has spent enough time with three-, four- and five-year-olds to know that they often do not get the credit they deserve. Children “are just told to follow orders or are told to only answer yes-and-no questions,” she says. But in five years of teaching at Libertas School of Memphis in Tennessee, Bradley has seen kids persistently try to solve math problems until they get them right, learn to show courtesy when they accidentally bump into a friend, and ask astute questions about parts of insects or features of the nearby Mississippi River.

In many preschool classrooms in the U.S., children are asked to do little more than identify shapes and letters and sit quietly on rugs during story time. But a growing body of research is overturning assumptions about what early education can look like. The studies back up what Bradley sees in her work: when children learn certain skills, such as the ability to focus attention—skills that emerge when teachers employ games and conversations that prompt kids to think about what they are doing—the children do better socially and academically for years afterward. A study published last year, which tracked kids for a decade starting in preschool, found some evidence that children with teachers trained to foster such abilities may get better grades compared with children who did not get this type of education.

Politicians routinely promise to give more money to pre-kindergarten schooling, but there is now a new player on the scene with a particular interest in this kind of approach. About a year ago Jeff Bezos, the world’s richest man, pledged to donate at least $1 billion to build a network of preschools accessible to children in low-income families and inspired by the Montessori program he attended in Albuquerque, N.M., as a child. Many Montessori programs emphasize this type of playful activity and choice making. His initiative is still taking shape, and it has not yet been announced how the money will be spent. But experts say that to do right for kids, any program will need to focus on at least two foundational skills: executive functioning and oral language.

In addition to defining those two foundational skills and describing why they are so important to student success, I offer examples from three different teaching approaches that, according to scientific studies, have had a significant positive impact on child outcomes. (These are also approaches featured in Trust for Learning’s new report, Ideal Learning in Principle and Practice.)

Where I could, I used recent studies to lift up specific actions that teachers can take in the classroom. For example, the article describes the fun and focused learning that emerges from playing a suite of six games called Red Light, Purple Light, designed by researchers on executive function at Oregon State University (one of whom, Megan McClelland, is a fellow with the Learning Sciences Exchange). And it explains how the Chicago School Readiness Project, studied by New York University’s Cybele Raver and colleagues, spotlighted the importance of giving teachers support for coping with stressful situations and training in how to respond positively to difficult behaviors in the classroom.

A separate study on oral language development also recognizes the links between helping teachers create an organized, calm, and non-hectic environment and long-term outcomes for children’s learning. As noted in a paragraph on the importance of “extratextual” talk with children during storytime (talk that is not just a recitation of the text in the book), researchers showed the importance of helping teachers to build their skills in organizing their lessons and keeping classrooms focused. For example, only in organized reading sessions, according to Sonia Q. Cabell of Florida State University, does the impact of that extratextual talk come through. As the article points out, “When classrooms were more chaotic, teachers were less likely to engage in conversation with children that stimulated their language development.”

Read the full article here and join the discussion about #ideallearning on Twitter.