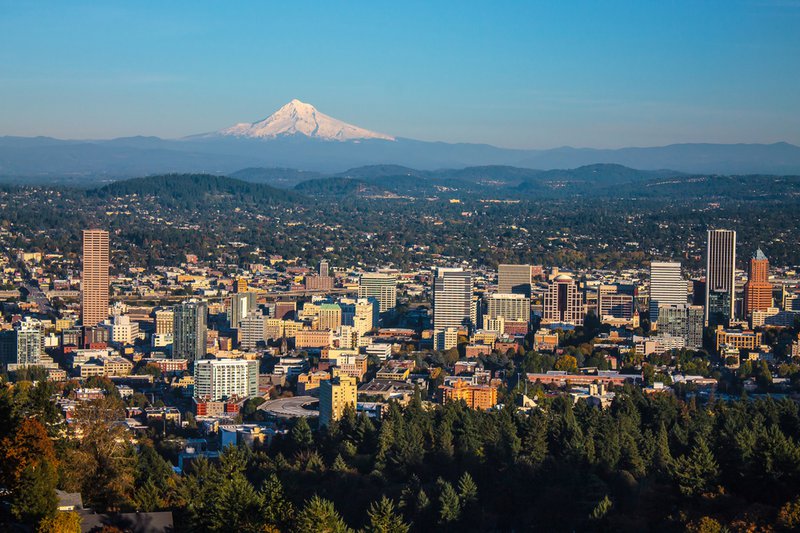 From the outside, Woodstock School in Portland, Oregon looks like a large one-story house. It has teal colored wood siding, lots of windows and flower bushes planted along the front path. Inside one kindergarten classroom, I watch a teacher go through a vocabulary lesson with a group of bright-eyed five- and six-year-olds. The students sit on a rug with their legs crossed and eyes forward. A few of them track back and forth between their classmates and the teacher as they try to keep up with the lesson. The teacher’s pace seems a bit fast, but it’s hard to tell when I can’t understand anything she’s saying. After all, she’s speaking in Mandarin and teaching her students about the Chinese character Fēi (飞) (“to fly”). The lesson’s content may be lost on me, but the significance of what I am observing is not. I leave the room in complete awe.

These kindergarteners are enrolled in one of the dual immersion programs offered in 26 different schools within Portland Public Schools (PPS). In the fall of 2014, a total of 4,362 students (or about 9 percent of all PPS students) were enrolled in a dual immersion program. Besides Mandarin, the district also offers programs in Spanish, Russian, Japanese and Vietnamese. PPS has a long history of incorporating languages into its schools — the first Spanish immersion program was started in 1986 at Ainsworth Elementary School — and has worked hard to continue expanding these programs across the city. In fact, the district has considered starting a Somali dual immersion program to address the stark performance gaps seen for Somali students and help better meet the educational needs of their native Somali Mahaa and Maay Maay speakers. (At present, the effort is pending while the district engages in a feasibility study and strategizes about how to surmount challenges related to hiring qualified staff and finding curricular resources).

A report prepared for the PPS Board of Education highlighted the sizable achievement gaps for Spanish-, Russian-, Vietnamese-, Chinese- and Somali-speaking DLLs and noted that “Implementing more two-way immersion programs or some form of bilingual education for these populations definitely seems justifiable.” Which is to say that this is a school district making thoughtful decisions about how to best serve their DLL students.

To be sure, PPS was not always so intentional about the scope and purpose of their dual immersion programs. Many of their first attempts were grassroots efforts designed to provide students with educational enrichment. These were “one-way” immersion programs that enrolled a majority of native English speakers. But over time, the district began implementing more two-way immersion programs, which enroll equal shares of native English speakers and native speakers of the partner language and are designed to improve the academic outcomes of both groups. Last school year, 37 percent of PPS dual language learner (DLL) kindergarten students were enrolled in a two-way dual immersion program up from 25 percent the previous year.

According to Michael Bacon, assistant director of PPS dual immersion programs, this fundamental shift in the way PPS approached language programs is guided by two objectives: 1) increasing educational equity and 2) closing achievement and opportunity gaps. Like many urban districts, PPS has large academic achievement gaps between different subgroups of students. In the 2013-14 school year, 54 percent of Latino students and 40 percent of DLL elementary students met or exceeded state standards in reading, compared to 73 percent of Asian students and 86 percent of White students.

The PPS Board of Education made equity a district wide focus in 2011 when they adopted the Racial Educational Equity Policy. That policy defines educational equity as increasing the achievement of all students while also reducing achievement gaps between different groups of students and “eliminating” predictable trends about which students are the highest and lowest achieving in the district. Equity is not about equality of opportunity, rather it’s about providing “additional and differentiated” resources to students based on their educational needs.

Specifically, the policy states that the district “shall provide every student with equitable access to high quality and culturally relevant instruction, curriculum, support, facilities and other educational resources, even when this means differentiating resources to accomplish this goal.” Bacon and his colleagues made clear that PPS believes that dual immersion programs are a crucial resource for closing the achievement gap for DLLs and other “traditionally underserved” students.

And there is research to back them up. PPS is collaborating with researchers at the RAND Corporation and the American Councils for International Education to conduct a four-year study of their dual immersion programs’ impacts on student achievement. The most recent findings show that PPS dual immersion students outperform their non-immersion peers in reading by fifth grade. Additionally, DLLs enrolled in PPS dual immersion programs have higher rates of reclassification (exiting DLL services) than language learners who are not enrolled in one of these programs.

Bacon asserts that district-wide dialogue about race, ethnicity, language, and privilege have combined with the equity policy have helped people “in the system” understand that equity is a top priority. And that’s made it easier (though still not frictionless) to expand dual immersion programs targeted at meeting the needs of specific student populations and reserve spots for native speakers of Spanish, Chinese and other partner languages.

Building a System to Match the Promise

The district’s commitment to expanding language options in its schools doesn’t translate into heedless implementation. Last school year, PPS added four new dual immersion programs — one Vietnamese, 1 Chinese and 2 Spanish — and hopes to add even more programs in the next two school years. But PPS uses a deliberate and long process (about 2 years) to determine site selection, partner language and program models for new dual immersion programs based on data and community input. They look particularly carefully at the number of DLL students enrolled at a particular school as well as in other immersion programs — and the academic achievement of these students.

Community input and advocacy have been essential to the district’s efforts to designate seats in dual immersion programs for children who are native speakers of the partner language. Enrollment into these programs is determined via a newly restructured lottery process.  In the past, the district focused so intently on fully enrolling the programs that equity goals like enrolling equal shares of English speakers and DLLs sometimes fell by the wayside. Now, as PPS officials explained, schools hold all native speaker slots and keep recruiting these students until they fill them up. This year, forty-four percent of the slots in Woodstock’s Mandarin program are reserved for native Chinese speakers - next year that number will increase to fifty percent.

Portland Public Schools is unique. There are a number of systemic factors that make it possible to scale up dual immersion programs to meet the needs of a  targeted student population. First, the Board of Education has been clear that  dual immersion programs are being expanded first and foremost to “support the success of emerging bilingual students.” Second, PPS leadership, such as Michael Bacon (who is a former bilingual teacher, speaks Japanese fluently, and is raising his children bilingual), not only embraces equity but understands the benefits of bilingualism on a personal level.

As Carmen Rubio, Executive Director of the Latino Network, shared “ We’ve done excessive advocacy on behalf of kids of color...to feel like this built up and decades and decades of advocacy has finally built up a pipeline where we had some leadership finally arriving up in the right positions. I think the Portland school district has definitely been a leader.” ((Interview with Conor Williams, April 2015.))

But PPS is not without its challenges. Finding certified bilingual teachers is a constant struggle; the district expends substantial resources to hire and sponsor teachers from abroad. As Bacon noted, even as the Board pushes for expansion of dual immersion programs, there is a “bottleneck of teacher capacity.” And counting on the existing system of teacher preparation to produce bilingual educators is “hit or miss.” However, hope is not lost — Portland State University has a Bilingual Teacher Pathway program that helps prepare and train teacher candidates already employed by PPS and even has a few Somali candidates in the pipeline.

Last year, PPS opened a dual immersion program at King School, which is located in a predominantly African-American neighborhood that is rapidly gentrifying. Bacon explained that PPS wants to find ways to ensure that language programs support DLLs and other underserved students first, rather than being tools for encouraging Portland's already-rapid process of gentrification. And that means that this year, the dual immersion program at King School had reserved slots for minority and low-income students. While that might be a political liability in other districts, in Portland it’s just another example of their commitment to equity and work to ensure the academic success of all students.