Measuring Pre-K Access and Quality with New and Improved Benchmarks 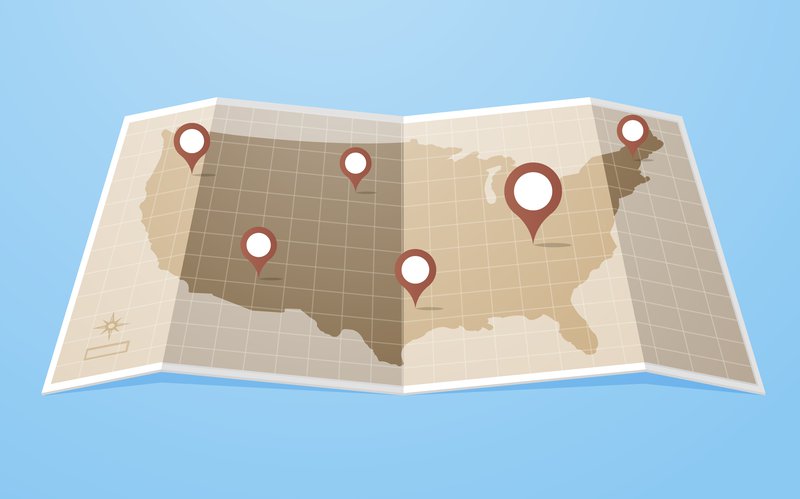 Yesterday, the National Institute for Early Education Research (NIEER) released The State of Preschool 2016, an annual report that provides data on access and quality of public pre-K programs in all 50 states, Washington, DC, and most recently, Guam. For over a decade these data have been a valuable resource for pre-K researchers, advocates, and policymakers. There was some good news this year: overall enrollment in pre-K is higher than ever before, states are finally spending as much per child as they did pre-recession, and states have increased their total investment in pre-K. While improvements were modest compared to last year, they are steps in the right direction—at least in some states.

Nationally, state-funded pre-K programs served 1.5 million children in 2015-2016, which is about one-third all four-year-olds and only five percent of three-year-olds. But progress continues to be highly disparate across states. Washington, DC, Florida, Oklahoma, and Wisconsin led the way in access, with each state serving more than 70 percent of four-year-olds. But at the other end of the spectrum, seven states still have no pre-K program at all, as shown in the map below. 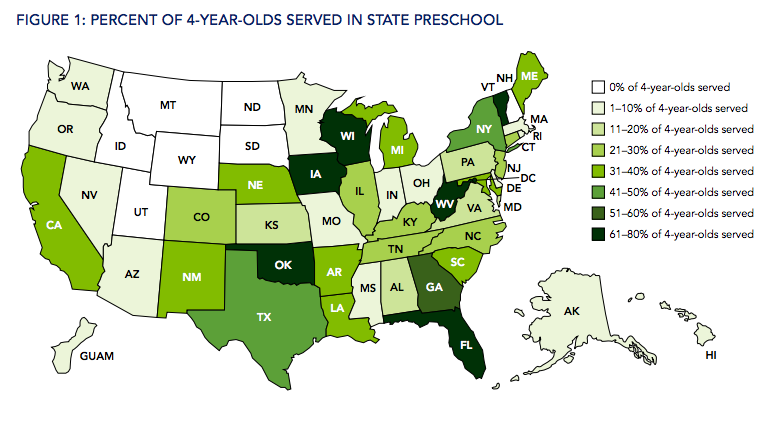 A four-year-old’s likelihood of attending a publicly funded pre-K program depends largely on which state he or she lives in, but three-year-olds in almost all states remain unlikely to have access. Washington, DC and Vermont are the exceptions, serving 70 percent and 43.8 percent of three-year-olds, respectively. Many states serve none. Enrollment increases for both three- and four-year-olds have been slow since NIEER started collecting this data in 2002.

Program quality has proven more difficult to measure. Since the first yearbook, NIEER has held states to a set of 10 quality benchmarks and has watched how they’ve progressed or not over time. But this year, NIEER released new benchmarks to better align with the latest research on early childhood education. As NIEER Director W. Steven Barnett previously explained in a guest blog on EdCentral, the original 10 benchmarks were “one tool for helping to determine quality by establishing the floor for standards that states should have in place. They are not the high bar some policymakers and advocates interpret them to be.”

Since NIEER’s first yearbook, there’s been a great deal of research to determine exactly what constitutes a high-quality pre-K program and what factors are associated with gains in student achievement.  According to the report, “policies more directly aimed at continuous improvement of teaching are likely to have stronger impacts on actual classroom experiences for children.” Thus, the new set of benchmarks “raises the bar and reflects a shift toward supports for practices more directly linked to the quality of children’s experiences in the classroom.” Here’s a breakdown of the changes:

While they may seem like small changes at first glance, striving to reach these new benchmarks could lead to substantial improvements in program quality. For instance, NIEER now looks for whether early learning standards are aligned with infant and toddler standards and K-3 standards. Aligned standards help ensure that one year of learning builds on the next and are essential to creating a cohesive birth-3rd grade continuum.

Another important change is the increased requirements around professional learning. Research shows that individualized professional development plans and ongoing coaching can improve instruction and student outcomes when implemented well. Also, the inclusion of assistant teachers is important since these educators often spend as much time with children as their lead teachers and may have very low qualifications.

The report explains how states fared on both the current and new benchmarks. Alabama, Mississippi, North Carolina, Rhode Island, West Virginia, and one Louisiana program (some states have more than one pre-K program) met all 10 of the original benchmarks. A majority of states met at least seven of them. The new benchmarks are more rigorous. For 2016, only Alabama and Rhode Island met all 10. The professional learning requirement proved particularly difficult for states to meet.

It’s hard to meet quality benchmarks and ensure fidelity of implementation without sufficient funding. Nationally, there was an 8 percent increase in funding for state pre-K in 2015-16. However, this is largely because of significant increased investments by California and Texas. As mentioned above, state per-child spending increased overall to an average of $4,976 per-child. (For comparison, the average district spending per-student in K-12 is just over $11,000.) Huge variation exists between states for  pre-K spending-- with DC at the top spending almost $17,000 per child and Mississippi at the bottom spending around $2,000 per child. Indiana increased spending per child by more than $3,000 this year, doubling their per-child investment. It’s the first time Indiana’s On My Way Pre-K program has been included in the Yearbook. (For more on Indiana’s growing pre-K program, read my colleague Aaron Loewenberg and my recent report.)