How Indiana is Building a Pre-K Program 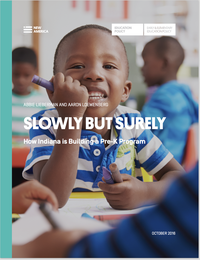 Indiana has half a million children from birth to age five and half of these children live in low-income families. Until recently Indiana was one of only a handful of states in the nation without a formal state-funded pre-K program, despite its large number of low-income children.

In the new brief, “Slowly But Surely: How Indiana is Building a Pre-K Program,” New America’s Early and Elementary Education Policy Program looks at the evolution of early learning in the state and the possibility of significant pre-K expansion in the next several years.

Indiana state leaders passed legislation in 2013 to establish its first pilot in pre-K education through competitive grants and a voucher-style program followed in 2014. In the report, policy analyst Abbie Lieberman and program associate Aaron Loewenberg take a closer look at the rollout of the Early Education Matching Grant (EEMG) and “On My Way Pre-K” programs, while assessing needed changes for future growth.

Under the smaller EEMG program, competitive grants are awarded to providers around the state who use the funds to enroll eligible children. Providers must achieve a high rating through Paths to QUALITY, the state’s voluntary Quality Rating and Improvement System (QRIS) and be able to make a dollar for dollar match of state funds to participate. Early evaluations show that children benefitting from EEMG funds have made significant improvements in important kindergarten readiness skills.

The “On My Way Pre-K” program, created in 2014, is allowing low-income four-year-olds to attend pre-K programs in five counties, including Marion County, home of Indianapolis. Like with EEMG, families can use the “On My Way Pre-K” scholarships at licensed centers, registered ministries, Head Start centers, and public school programs in both full- and half-day formats. Thanks to contributions from philanthropic groups and the local business community, Indianapolis has been able to fund its own additional pre-K program to build on the state’s efforts. The citywide program, known as the Indy Preschool Scholarship Program, has made it possible for some three-year-olds to receive pre-K services in addition to four-year-olds. Approximately 2,300 pre-K children were served last  year through these scholarship programs.

The report’s authors offer several recommendations for state lawmakers and advocates as they continue to push for expanded pre-K access throughout the state. These recommendations include:

The full report with additional recommendations can be found here.