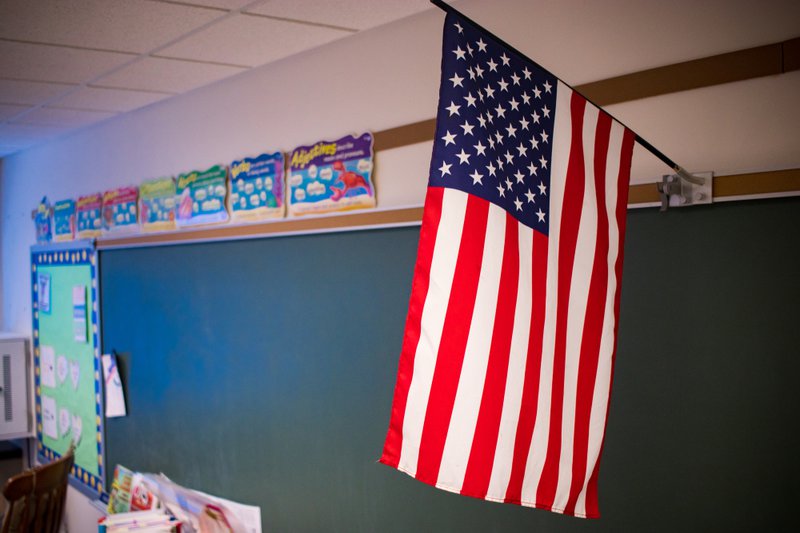 Across the country, Immigration and Customs Enforcement (ICE) and local law enforcement are teaming up. Under current ICE partnerships, commonly referred to as 287(g) partnerships, local police in 20 states are empowered to carry out immigration law. But new research suggests these alliances are a serious misstep.

According to a recent paper from researchers at Stanford University, in 55 counties where local law enforcement officers partnered with ICE, schools saw a 10 percent drop in Latinx enrollment within two years of the partnerships being formed. The researchers estimate the total number of Latinx students displaced between the years 2000 to 2011 tops 300,000.

The majority of students affected were elementary school students and American citizens. In some cases, these students moved in the middle of the school year. And though researchers didn’t track where families relocated, it's likely they either returned to their home country or found refuge in counties with more favorable immigration policies.

In either case, Latinx students were likely set back. “The sort of displacement we discovered can be harmful to children’s success in school and later in life,” wrote Thomas Dee, the study’s lead researcher, in a recent article firmly rebuking the controversial partnerships.

Indeed, research finds that the consequences of midyear moves are many. Student engagement, attendance, and developmental well-being can all suffer when students transfer schools before the end of the year, especially if they do so under challenging circumstances.

On top of the negative effects of dislocation, experts warn that anti-immigrant atmospheres can stir fear and anxiety in young people, which can ultimately take a toll on their academic well being. In fact, research has shown that intensified immigration enforcement can increase the likelihood of dropping out of school or repeating a grade.

And while young people who are undocumented themselves or who have at least one undocumented parent—725,000 and 4.5 million youth nationwide, respectively—feel the brunt of tightening anti-immigrant rhetoric and policies, recent research suggests other students are affected, too. In a survey of K-12 educators published by the Civil Right Project at the University of California Los Angeles, for example, educators reported an uptick in the number of students experiencing post-traumatic stress disorder (PTSD) symptoms due to immigration worries concerning themselves or their peers.

Schools and districts have been under significant pressure to come up with solutions to ease these fears. In response, a few districts have adopted “sanctuary schools” resolutions, clarifying policies and practices concerning cooperation with ICE in schools and emphasizing that schools are required by law to safeguard student’s personal information and legal status. Other communities have taken a step further, by allowing schools to serve as hubs for legal clinics, where legal experts can connect and share information with undocumented families.

Then there’s the matter of students’ emotional needs. Students experiencing a family deportation, or fear of separation, may need additional support from well-trained educators, administrators, and school psychologists. Of course, organizing these resources can be a challenge for schools, especially those that are already financially strapped.

Given the turmoil 287(g) agreements inflict, why enter into them?

Supporters continue to purport ICE partnerships are intended to support community safety, even if research has not born this out. These partnerships might have the opposite impact, in fact. Because the more drastic agreements allow local police officers to act as immigration authorities outside of jails, any encounter with police, even a traffic stop, can launch an undocumented person—criminal record or not—into deportation proceedings. Civil rights advocates argue this retooling of local police can chip away at community trust and ultimately be counterproductive to policing efforts.

ICE partnerships are also under scrutiny for emboldening officers to racially profile and harass Latinx community members. In a few participating counties, instances of civil rights violations and discriminatory policing were so numerous under 287(g) agreements that partnerships had to be severed or not renewed.

Neither have these partnerships provided benefits to schools in participating counties. Dee and his co-author also examined whether the exodus of Latinx students led to increases in resources (as measured by teacher-student ratios) and reductions in poverty rates (as measured by eligibility for free and reduced priced lunch). In counties that experienced a decrease in Latinx student enrollment, schools did not see a significant decrease in the teacher to student ratio. The number of financially needy students also remained unchanged. But as Latinx students trickled out of the classroom, the students left behind lost the benefit of having diverse and multilingual peers.

Despite the clear drawbacks and questionable reward involved in allowing local police to enforce immigration law, the Trump administration has called for increasing the number of agreements across the country. Two-thirds of the 78 existing agreements were adopted under Trump’s term. If more counties heed the President’s agenda, Latinx children will surely be caught in the crosshairs.

But it doesn’t have to be that way. Lead researcher Thomas Dee points out a fact that warrants emphasizing: these partnerships are completely optional. “Local communities can simply choose to say no,” he writes.

Solutions to the most pressing problems are often difficult to solve—they require effort, time, money, and people. But this solution doesn’t. In this case, harming Latinx students can be avoided simply choosing not to do something.