Employers Pay it Forward by Helping Staff Return to College 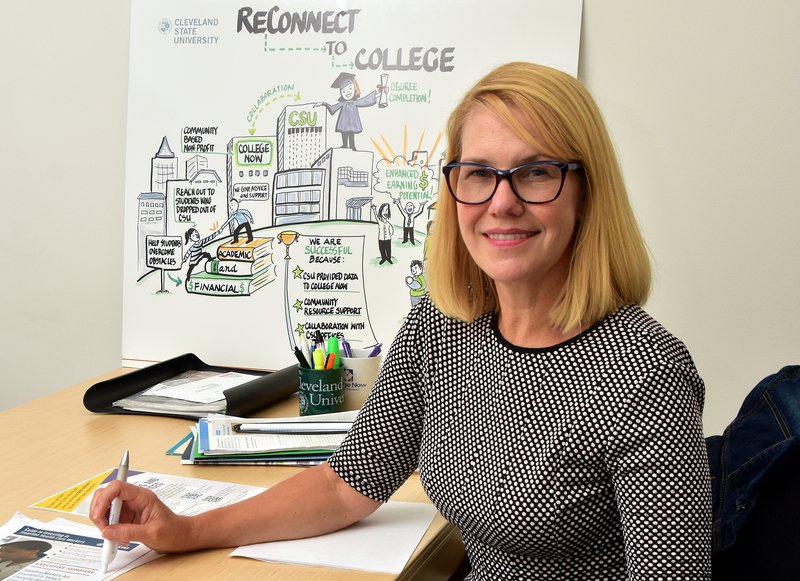 Employers can buy legal services for their workers through MetLife Legal Plans Inc. Good benefits build employee loyalty, Tolentino would argue from MetLife Legal Plans’ office in a Cleveland skyscraper. That’s why she always thought it made sense to offer tuition reimbursement to her employees, particularly her call-center workers who need a four-year degree to advance.

Good benefits might be good business but getting employees to use them can be challenge. That’s why Tolentino upped her company’s reimbursement offer from $250 a semester to $2,500 a semester or $5,000 a year. Even so, it might not be enough.

Cleveland’s Bridging the Talent Gap* survey of both employers and employees lays out the challenges.

Employers think their employees are aware of existing tuition assistance programs. They are not, according to the survey.

Employers think their employees are too busy to pursue a degree. True, but employees also don’t see how education will advance their careers. They worry about making the wrong choices – those who “stopped out” often quit because they didn’t pick the right credential to meet their educational goals. To go back, they need both time and career advice.

But money matters most.

In fact, tuition reimbursement itself may not be enough to move the needle on adult enrollment.

Why? Because many adults, already burdened with student debt – either their own or their children’s -- can’t afford to pay up front. No wonder the number one barrier to returning is money, as the survey said. That’s the situation for Patrick Flynn, a MetLife Legal Plans employee interested in finishing his degree, but so deep in past college debt that he doesn’t want to take on one more dime. "I would definitely be interested in going back to college,” he said. “But that $27,000 [debt], I don’t want to add to that.”

Other tuition assistance models exist. Some employers, including Wawa Inc., a 36,000-employee convenience-store chain headquartered outside of Philadelphia, are turning to disbursement, paying the college directly at the start of the school term, rather than reimbursing students later.

“The best practice is to make all the resources available up front,” said Hadass Sheffer, president of The Graduate! Network, a national alliance of an alliance of organizations like College Now Greater Cleveland working to increase college completion among adults.

A U.S. Federal Reserve survey found that in 2018 40 percent of U.S. adults didn’t have enough savings to cover a $400 emergency, let alone tuition.

Employers may think that adults will be more likely to complete their coursework if they have financial skin in the game, Sheffer said. But their employees can’t even get in the game if they don’t have the money.

Employers also may worry about losing money if they pay upfront. But Sheffer said, employers can more readily assume the financial risk. “Even if they quit, you can still dock their final paycheck,” Sheffer said.

The way she sees it, the employee is putting forth effort and sacrificing time with family. Meanwhile, “an employer benefits with every class session,” as employees bring fresh knowledge into the workplace the very next day.

The resources, she said, include money, but don’t stop there.

At MetLife Legal Plans, Julie Szeltner, College Now’s director of adult programs and services, and her crew offer help with student loans, showing employees how they might set up new payment plans. They help them navigate the dreaded FAFSA (Free Application for Federal Student Aid) form for themselves and their children. They provide career and college counseling in one-on-one sessions.

“My representative was fantastic,” Flynn said. He described MetLife Legal Plans as “one of the best companies I ever worked for.”

That’s the kind of employee engagement that makes Tolentino a believer. A College Now board member, Tolentino plans to monitor what happens at MetLife Legal Plans if more employees return to college. She wants College Now to use her company’s data to convince other employers that there’s a business case for helping employees get the college education they started but never finished.

In the call center world, productivity can readily be measured, Tolentino said: Number of calls taken. Average talk time. Referrals. Absenteeism. Amount of time on the phone as opposed to long bathroom or chit-chat breaks. “The employees I support will come to work more energized.”

“Hopefully we get a good take-up rate and can demonstrate a solid business case,” she said.

Her motives are both professional and personal.

Tolentino grew up in Spanish Harlem in the Bronx. “My whole life, my parents between them had three or four jobs to take care of their kids – truck driver, bodega in the Bronx, house cleaner, nanny, home health care, taxi driver.”

Her parents insisted on college for Tolentino and her four brothers. “I got to go to Syracuse University on pretty much of a full-ride,” she said.

Returning home for the holidays, “I realized how it changed my life, seeing my friends who never went. We probably have the cure for cancer sitting in some ghetto somewhere or in a call center in Cleveland.

“I’m responsible for enabling that in as many people as I can,” she said. “I’m going to do everything I can and if College Now gives me a tool, I’m going to use it.”