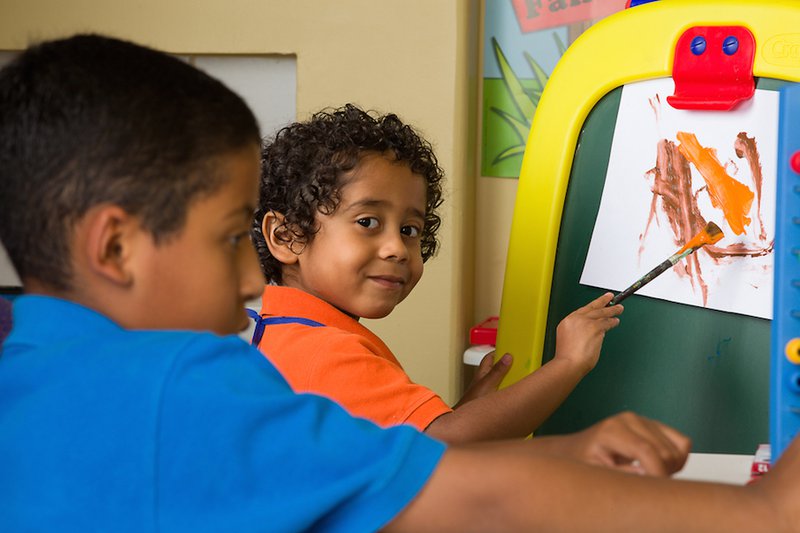 Early childhood education programs across the country are experiencing a consistent increase in the enrollment of dual language learners. Nationally, the number of children who speak a language other than English at home has more than doubled over the past 30 years, and most DLLs are concentrated in the early and elementary school grades.

Despite the rapid growth of DLLs in early childhood programs, research regarding the youngest DLLs is still in its early stages. While there is a growing body of research focused on educational practices that support DLLs, much of it is focused on the K-12 population rather than the influential period of a child’s life that takes place prior to kindergarten entry. A 2018 study from the Migration Policy Institute (MPI), a non-partisan policy research organization, helps to highlight best practices and offers concrete examples for effectively teaching the country’s youngest DLLs.

The MPI study highlights teaching practices that support the learning and development of young DLLs by examining six pre-K classrooms in Boston. The classrooms studied were nominated by their communities for providing high-quality early learning opportunities for DLLs and include a mix of three program types: public pre-K, private pre-K, and Head Start. Children in the classrooms studied spoke a mix of different languages and the percentage of students in each classroom classified as DLLs ranged from a low of 33 percent to a high of 100 percent (see Table 1 below). All six classrooms scored highly on the ELLCO Pre-K tool that assesses both the quality of the classroom environment as well as specific instructional practices. The study authors conducted numerous classroom observations, discussions with DLL family members, and interviews with teachers and directors in order to gain a better understanding of why these classrooms excelled in their use of developmentally appropriate practices for young DLLs.

Since this study took place in Massachusetts, it’s worth taking a moment to understand the unique history of English-only policy in the state. In 2002, Massachusetts voters approved Question 2, which eliminated transitional bilingual education in favor of sheltered English immersion, meaning English had to be used as the exclusive language of instruction for DLLs. Only minimal amounts of home language support could be provided when needed despite the fact that studies suggest strong home language skills help build skills in English.

This English-only model finally changed in 2017 when Governor Charlie Baker signed the Look Act, which gives districts more flexibility in how they teach DLLs. Districts can now choose a research-based teaching method other than sheltered English immersion to help DLLs develop their English language skills. While many teachers interpreted Question 2’s mandate for sheltered English immersion to apply only to K-12 education and not pre-K, it’s a sign of progress that the pre-K students in the current study went on to enter a system in which they could receive support as they continued to develop their home language skills.

So what kind of instructional practices did the study find were taking place in the exemplary classrooms that were examined in Boston? All of the classrooms, no matter which kind of program they were part of, were led by teachers who valued the home languages of students and made thoughtful decisions about incorporating the use of home languages throughout the day. For example, a Head Start teacher used Arabic to remind a native Arabic speaker to sit on his spot during morning meeting. A teacher of public pre-K used both English and Spanish to introduce science concepts about plant growth. Assistant teachers spoke Spanish to students to help scaffold their play during learning centers. Children were given the choice of whether to use their home language or English when greeting their classmates during the morning meeting. The study concludes that students “should have the flexibility to use their home languages as living languages in the classroom.”

Closely tied to home language use in the exemplary pre-K classrooms was the fact that teachers and directors of all the program types studied viewed bilingualism as an asset for students and families. The study concludes that “educators’ asset-oriented beliefs were critical in motivating them to develop meaningful and intentional practices for honoring and using home languages in each classroom.” This showed up in a variety of ways in each classroom. When a new DLL child joined the school the pre-K director immediately searched for a volunteer who spoke the child’s home language to support their transition. Family members regularly volunteered in the classroom and were encouraged to speak their home language. Families were asked to contribute resources in their home language for use in the classroom, such as lists of common words in their language.

The study concludes with a lengthy list of policy recommendations (view them all here.) For example, current and prospective teachers should possess in-depth knowledge about the language and early literacy development of DLLs and should make efforts to gain knowledge about individual children and families through home visits and home language surveys. Young DLLs should be provided with tailored support, such as one-on-one language supports during whole-group read-alouds. While DLL research for our youngest students in still in its early stages, paying attention to what’s working in exemplary classrooms is a way to begin to make the changes necessary to create high-quality educational experiences for all DLL students.