Cultivating Pre-K Through Third Grade Leaders Across Systems in Minnesota 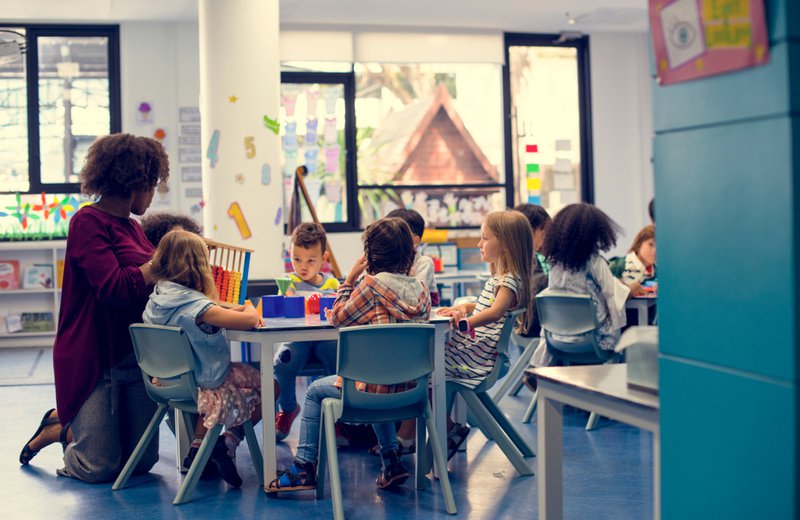 This is the third blog in a series on professional learning for elementary school principals. A new blog will be released every Tuesday between April 30th and May 28th.

The wind chill the February morning of the first Regional PreK-3 Leadership Workshop was below zero, with a few feet of snow on the ground, yet many district and school leaders drove more than an hour to get to Fergus Falls, Minnesota, located in the northwest corner of the state.

The group gathered for the first of three workshops in the series. During the 2018–19 school year, state officials embarked on a road show engaging leaders in discussions on children’s first eight years of life and what schools, districts, and communities need to do differently. In that vein, a key topic of the first workshop was shifting mindsets. “Pre-K through third grade is a new game—not another strategy or initiative—that requires a new way of working,” said Mike Brown, Education Specialist at the Minnesota Department of Education (MDE).

This pre-K through third grade focus is meant to align with and strengthen other statewide initiatives, namely Minnesota’s World’s Best Workforce statute, which includes school readiness and third grade reading goals. As part of this initiative, school boards are expected to implement a “long-term, comprehensive strategic plan to support and improve teaching and learning.”

The February workshop in Fergus Falls was just one of seven, three-day series, taking place across the state this winter and spring. The workshops are held in partnership with the six Minnesota Initiative Foundations, referred to as MIFs. (The Twin Cities metro area does not have a MIF, so MDE partnered with the Minnesota Elementary School Principal Association (MESPA) to provide the workshops to that metro area.) The MIFs help secure a location, pay for food, and recruit local participants. The MIFs were established by the Minnesota-based McKnight Foundation in the 1980s as a way to respond to regional contexts and support needs and opportunities in different parts of the state. Minnesota is largely rural, but the Twin Cities get most of the attention and resources in policy decisions. The MIFs aim to rectify this.

The workshop series, designed and delivered by MDE staff, is broken into three full-day sessions where district teams come together to deepen their learning and develop pre-K through third grade alignment plans for their schools, districts, and communities.

Minnesota’s focus on leadership is part of a larger vision around pre-K through third grade implementation. In 2015, with the Minnesota Elementary School Principals Association (MESPA) and with funds from Race to the Top–Early Learning Challenge and a grant from the McKnight Foundation, MDE launched a PreK–3 Principal Leadership Series. Principal-led teams of school leaders from around the state were invited to participate in the series, which was based on the National Association of Elementary School Principal’s Guide for Leading Pre-K–3 Learning Communities. The state ran four cohorts of the series in the Twin Cities, ending during the 2017–18 school.

While running the PreK-3 Principal Leadership Series, MDE with MESPA and the Minnesota Association of School Administrators offered additional professional learning opportunities for school and district leaders as well as teachers to bolster pre-K through third grade work. One opportunity was a free online course focused on building rigorous and robust learning environments developed by FirstSchool at the University of North Carolina–Chapel Hill. The second opportunity was a four-day series to help leaders build coherence across the learning continuum, based on the work of Michael Fullan and Joann Quinn, and led by Quinn.

Knowing there was more work to do, principals and other leaders who learned about the promise of a pre-K through third grade approach kept asking, “what does it look like in practice?” MDE developed a new series focused on action. This time the agency took the message on the road, traveling out to communities. The state’s regional summits, in partnership with the MIFs, are funded in part with dollars from Title II of the federal education law, the Every Student Succeeds Act (ESSA). The law expands the focus on the role of principals and other school leaders as well as on early education. When the state’s Race to the Top–Early Learning Challenge grant expired, it was able to sustain the program through ESSA instead.

The districts represented in the Fergus Falls training were rural, some having just a single school with one principal overseeing pre-K through 12th grade, sometimes located in the same building as the district office. Rural districts often face different challenges than urban and suburban districts so tailoring the professional learning to meet their needs is important.

Some may think it is easier to create a strong pre-K through third grade continuum in a small community where it is not difficult to get district staff, principals, and teachers in the same room, but challenges still exist. One participant, the only one from her district to attend the training, lamented that it is “difficult to create teams because one person is wearing so many hats.”

MDE requests leaders participate as a team, but does not require specific roles to be included. More than one participant, though, attended alone. The agency makes recommendations for teams, suggesting that those who contribute to the “design, implementation, and evaluation of your PreK–3rd system” should come to the sessions, including at least an early childhood administrator, early childhood special education administrator, elementary school principal, Head Start director, and community early childhood program leader. For the second workshop day, MDE recommends other school and district administrators, who oversee curriculum, instruction, and assessment, also attend. While flexibility is beneficial for districts and schools in the short term, consistency is essential in the long term. This means having the right team members matters and so does ensuring that each actor involved in implementation has a solid understanding of what needs to be done and why.

Few attending the February workshop had taken part in MDE’s previous professional learning opportunities. So, for many, this content was relatively new, although recognizing the importance of children’s early years was not. Depending on what part of the state MDE is visiting, people in the room could range from those who attended the original Principal Leadership Series to those who are just beginning to understand the shifts in mindset required. In a follow-up interview, Brown noted the varying levels of knowledge about pre-K through third grade strategies added to the challenge of creating a just-right workshop. MDE debated offering these workshops only to those who participated in the previous series, but because staff wanted to increase reach, in addition to depth, across the state they opened them to anyone.

Participants at the Fergus Falls workshop began the day by listening to a presentation on child development and third grade reading and then creating posters in teams on what impacts third grade reading. Someone in the room noted a lack of shared understanding of readiness across entities and said this has limited the community from doing pre-K through third grade alignment well. Others commented on the importance of getting transitions right for children and families. Part of this, one participant said, is encouraging kindergarten to use early childhood language to ensure the two years don’t feel so far apart. Other participants discussed challenges in collaborating with kindergarten teachers: “kindergarten feels so out of reach.”

The rest of the day focused on developing a shared understanding of pre-K through third grade work, mapping current efforts across the early learning continuum, and thinking about the role of data in this work. Because of the rich conversation and engagement—and a packed agenda—MDE didn’t get through all of the topics it had planned and encouraged attendees to dig into those other topics before the second workshop in about six.

The goal is that by the end of the three workshops the teams will 1) have a plan that is ready to implement that includes a current district goal, a new district, school, or program goal and a community goal; and 2) districts are prepared to incorporate pre-K through third grades into their 2019-20 World’s Best Workforce plans. Recognizing that additional professional learning opportunities will be needed, depending on where communities started and how far along they get, MDE officials are planning a second phase of this work. Among the challenges on the team’s radar are encouraging principals to consider how they can support children’s learning before they enter elementary school, expanding pre-K access, and improving educators’ data literacy.

What the next phase looks like will also depend on feedback from the current workshop series. The road show concept has been well-received and enables MDE to directly engage with school, district, and community leaders on pre-K through third grade strategies, however, coordinating schedules, finding space, and operating with tight timelines for the workshop series posed challenges. The MDE team has received positive feedback verbally and from the session surveys, but it wants to do a deeper evaluation of its pre-K through third grade leadership work. “It is a top priority,” said Bobbie Burnham, director of MDE’s Early Learning Services, noting that the agency is currently working with experts to help determine how best to do it.