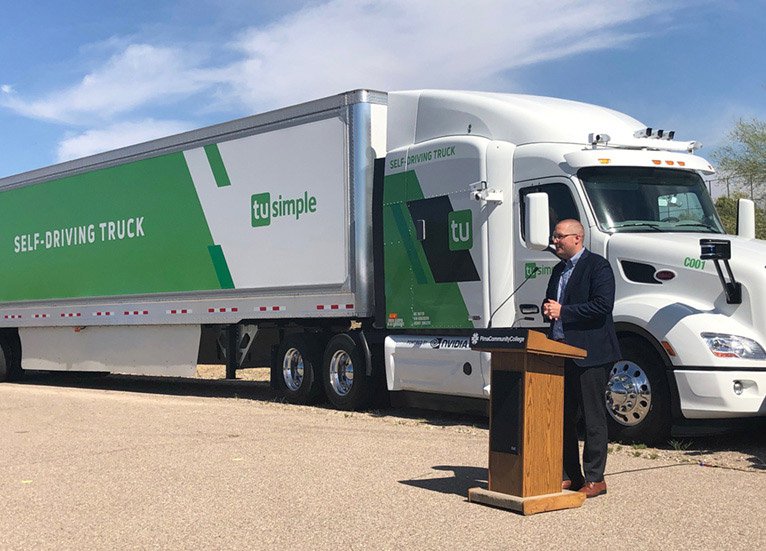 Truck driving is a tough job. Nearly 5,000 people die each year on U.S. roadways in an accident involving a truck, and the demanding occupation is known to be associated with a number of mental and physical health risks, and yet, trucking remains the number one job in twenty-nine states in America–but that may be changing.

Despite being backed by an annual $800 billion dollar freight business enterprise, the existing popularity of the job, and the competitive pay and benefit offerings, the industry is facing labor shortages amid a generational transition.

The typical trucker is aged 57 and that average is increasing.

The industry is struggling to attract new workers, and the annual turnover rate is approaching 100 percent. According to the American Trucking Association, the worker shortage could reach 175,000 by 2024. Desperate for workers, even teens are now being recruited to drive 18-wheelers.

Fortunately for the industry and for its workforce, the autonomous vehicles movement is swiftly approaching and might just be what the sector needs to modernize its image, attract younger workers, and improve job quality all at once.

And contrary to popular belief, for the near future, autonomous vehicles still require workers.

Seeing both the future of autonomous vehicles and the trucking workforce on the horizon, TuSimple, the first self-driving tech company to go public in the United States, approached Pima Community College in Arizona, to create the first autonomous driving certificate for truck drivers.

The Class A CDL pre-requisite is waived for new workers since employers are also seeking workers for operations (non-driving) jobs.

The program, which can be completed part-time or full time and online or in-person, equips students with an applied understanding of logistics, computer information systems, and advanced industrial technology, and the certificate is stackable to Pima’s higher level degree programs in Automated Industrial Technology, Logistics and Supply Chain Management, and Cybersecurity.

The program cost varies from $868 to $3,228 depending on format chosen and is included on the Eligible Training Provider List with WIOA funding.

What positioned Pima Community College to stand out to TuSimple as the right partner to train for these emergent jobs?

While it may sound glamorous, training for “work of the future” can be risky especially at the non-degree level. Not all emergent jobs are quality jobs either.

When talks began TuSimple had less than ten employees, no trucks or warehouses in Tucson, and now they're a unicorn company with a $1 billion+ valuation.

Whereas research universities employ administrators and faculty with relevant expertise to help navigate the regional technology-based economic development terrain, most community colleges do not.

For Pima that strategy was to embed itself within the economic development fabric of its state to ensure it was training purposefully and side-stepping hype.

In particular, Pima Chancellor Lee Lambert elevated the stature of the college as a player in economic development as the sole community college voice on the board of public-private economic development organization, Sun Corridor, which recommended Pima as the ideal training partner to TuSimple.

But many college presidents serve on such boards.

“Other colleges typically don’t have the economic development function formally assigned.” Ian shared “At Pima, workforce development is framed as part of the broader economic development context. It’s not enough to train for jobs that are already here. Pima wants to fuel job creation in our region because it means more opportunities for our learners.”

The program was made possible with federal support from the U.S. Department of Transportation

In a 2017 reauthorization of the UTCs, each center was required to identify a lead for workforce development within the consortia -- Pima was tapped to lead for the workforce pillar, becoming only one of eight community colleges to join a UTC.

The Pima-TuSimple program received a grant from PSR-UTC and designed the program in the background of a DoT study examining how the development and deployment of automated vehicle-related technology is expected to impact the transportation workforce. Moving forward, more community colleges may be well aligned to partner and win newly announced workforce grants from the U.S. Transportation Department.

This is yet another example of community colleges fit into emerging technology and talent development, particularly when federal research funding is involved, important as such investments expand.

Pima’s story is not an isolated incident. Whether in artificial intelligence or blockchain technology, community colleges are beginning to focus on more equitable and diverse pathways to jobs of the future.

Shalin Jyotishi is a Senior Policy Analyst on Education and Labor at New America, a Fellow with the Center for the Fourth Industrial Revolution at the World Economic Forum, and a Visiting Scholar in Science Policy at the American Association for the Advancement of Science (AAAS). He is on Twitter @ShalinJyotishi

Ian Roark is Vice President of Workforce Development & Strategic Partnerships at Pima Community College. He is on Twitter @IanRRoark