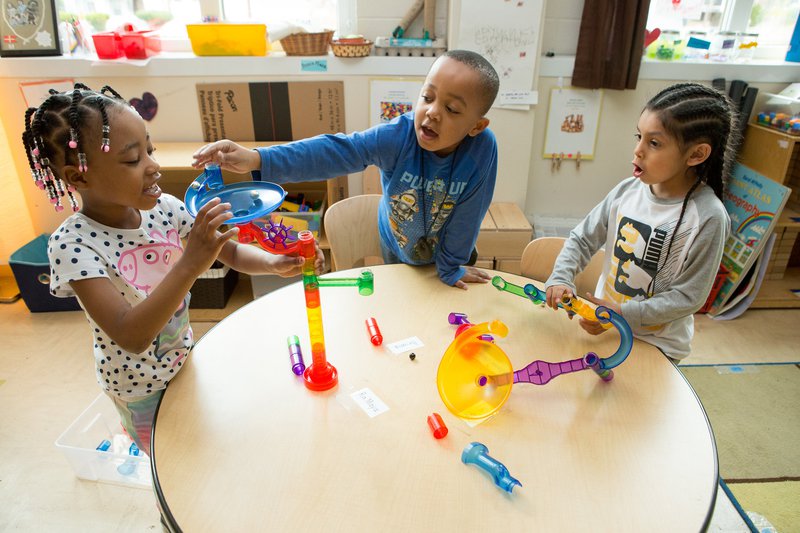 At one time kindergarteners played to learn much of the school day. They explored. They learned to get along with other children and made friends. But in the past few decades, the pendulum has swung almost entirely in the opposite direction. Now, in many places, kindergarteners spend much of their day in teacher-directed reading and math instruction with limited options for choice, socializing, exploration, or play.

Some parties attribute the shifts in kindergarten to the academic standards movement in the 1990s and No Child Left Behind. In principal focus groups that New America held in 2015, several principals acknowledged the shifts. Some recalled district officials, in the mid-2000s, telling them to remove the play kitchens from kinder classrooms. “There’s no time for play anymore,” officials stated. And, in 2016, University of Virginia researchers published a study with the title that asks, “Is Kindergarten the New First Grade?” showing that kindergartners were exposed to more reading and math content in 2010 than in 1998. But, more exposure to math and reading alone isn’t the problem. Instead, how state and local policies requiring more reading and math content are interpreted and implemented.

Kindergarteners learn best through play, relationships, and interactions. They need well-rounded learning opportunities that include opportunities for not just reading, but also science and math, and they need activities and discussions that help them learn about the world and cultures around them. In fact, for children to become strong readers and lifelong learners they need teachers who build their background knowledge and vocabulary and create those well-rounded learning opportunities— including through play.

Through guided play, exploration, relationships, and conversations, kindergarten teachers can transform learning for children from something teacher-directed and constrained to something engaging and interactive. But to do this well, educators need enabling state and local policies, appropriate resources and environments, and supportive schools.

New America has launched work to tell the story of kindergarten across the country, elevate the most important research findings on teaching and learning in kindergarten, identify and highlight bright spots, and promote state and local policies that create the conditions for kindergarten instruction and environments in the ways young children learn best.