White Parents, It's Your Turn to Carry This Burden 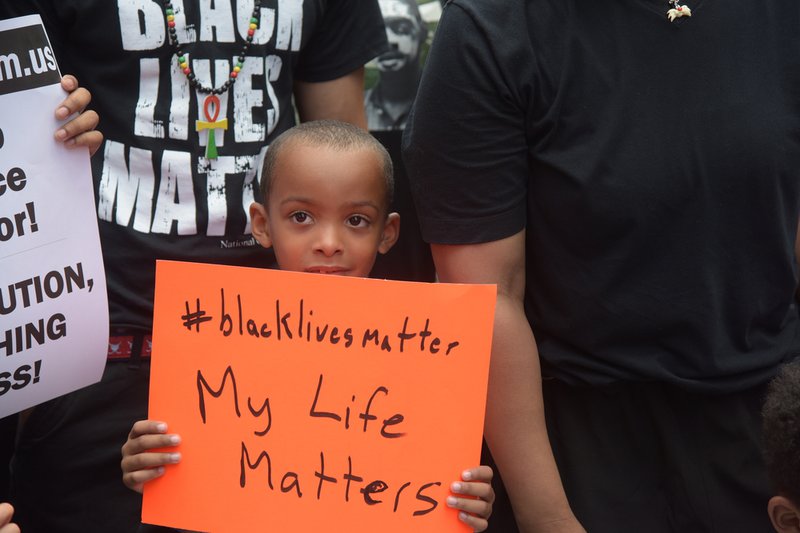 I date myself with a reference to Rodney King, and I do so intentionally. I was fourteen when he was brutally beaten by LAPD officers; I had no thoughts of kids, or how a parent protects them. But in households around the country, Black parents were having “the Talk” with their children— an intense, high-stakes training on the realities of racism— in the hopes of inoculating them against disproportionate police targeting and brutality.

My oldest child is now seven years old. A few nights ago, we discussed George Floyd’s death. Even with my high-level, simplistic explanation, he understood and was brought to tears. He thought at first that I was speaking of the past, and I could see the fear on his face when I explained that this wasn’t “back then.” He asked a lot of tough questions about hate and racism, and ended by telling me he wants to leave the United States. He was terrified.

Like my son, I am deeply afraid—and it’s based on a lifetime of experience. The week that California schools closed to accommodate shelter-in-place orders, parents in my son’s class were scheduled to meet with the teacher, principal, and district leaders to discuss four instances of the use of the N-word in my second grader’s classroom. A “friend” once told my son that he was his slave. And when he was just four, another parent at soccer practice called my son “violent and hostile” for raising his voice slightly—while his blonde-haired teammate, who was speaking in the same way, was simply “overtired.”

I try not to let my anger in these instances or fear for my son’s future paralyze me; instead, I do my best to find solutions. But as I shared ways he could appear less threatening to cops and other people, I found myself tearing up. Here I was, telling a little boy to be submissive in the interest of his survival—while white protestors could arrive, armed and screaming, in government buildings and be afforded unending patience by law enforcement.

I shouldn’t have to have this conversation, and my son shouldn’t need to hear it. The time has come for this burden to be shared by those who make it necessary in the first place—either deliberately or through silent complicity. White parents, you need to start having the Talk with your children. Your “allyship” can no longer be confined to retweets, sad faces on Facebook, or thoughts and prayers. When you talk to your kids about racism, don’t just frame it as an abstract concept divorced from lived reality; instead, engage in thoughtful, intentional training on what to do and how to behave. Racism is a virus—if you're not actively vaccinating your children against it, it will infect their hearts and spread, harming all who come in contact with it.

We can’t rely on the education system to do this work for us: A friend in the education space told me about white teenagers she’s come across who didn’t learn about slavery or the civil rights movement until high school. She recounted her white sisters-in-law, who didn’t want their teenage daughters to see the film Hidden Figures because it “might make them feel bad.” A study revealed that white children who attend predominantly white schools and grow up in predominantly white neighborhoods are less likely to take racism seriously than children who grow up in more diverse settings; many of them have a limited understanding of our country’s sordid history. A quote from an 11-year-old in a 2018 Time article says it all: “Racism was a problem when all those slaves were around and that like bus thing … like Eleanor Roosevelt, and how she went on the bus. And she was African American and sat on the white part … but after the 1920s and all that, things changed.”

What did that 11-year-old child learn, I wonder, about the white supremacists who marched in Charlottesville? Those “very fine people” hailed from more than 39 states and returned to their jobs and communities after the rallies—a Top Dog employee from Berkeley, a 20-year-old student at the University of Nevada, Reno. White parents, teach your children that racism is alive and well, and that it wears a human face: your dentist, your mail carrier, your police officer, your teacher, your friend. If you’re not actively training your kids to recognize and combat it, you shouldn’t be surprised if you end up hearing it one day from their lips.

I can’t tell white parents how they should approach the Talk with their children; I’m not even sure how to have that conversation with my own. It’s hard as hell, and none of us are sure we’ve got it right. But I’d recommend, for a start, reading this NPR piece and this entire Twitter thread—and bucking yourself up with the closing argument from the 1996 film A Time to Kill. Avoid using the word “tolerance,” and don’t try to teach your kids to be “color blind”—that’s not a real thing. Our identity isn’t something to be put up with or ignored; it’s to be respected and celebrated. And it’s not enough to simply insist that they “acknowledge” their privilege. That privilege must be actively wielded as a shield for Black lives—not weaponized against them, as Amy Cooper did.

Start young, and don’t just limit the conversation to a single talk. Your child’s sense of right and wrong stems from what they observe in your everyday behavior—the jokes you laugh at, what you show fear toward, when you roll your eyes, and what you discuss at the dinner table. In choosing who they will become, your children will first look to you—what you stand for, and the injustices you refuse to accept.

Three days after my conversation with my son, I walked into our living room and found him on a Zoom call with a few other classmates. He looked up, his headphones still on, and told me, “The reason that happened to that man was because he was using fake money. That’s why it happened.” It was a gut punch. In spite of our talk, a white child had, in mere moments, made my son question the extent to which George Floyd’s life mattered—and, perhaps, even his own sense of self-worth.

I can’t write this without crying, but I don’t have the luxury of shying away from it. My husband and I will talk to our son again, and again, and again. It’s hard to find the words, but white parents need to step into this discomfort and start trying. No one ever feels ready for the Talk—but the sooner you have it with your children, the sooner mine can start living in a country where their lives truly matter.