We Do Not Get to Blame Putin for This American Election 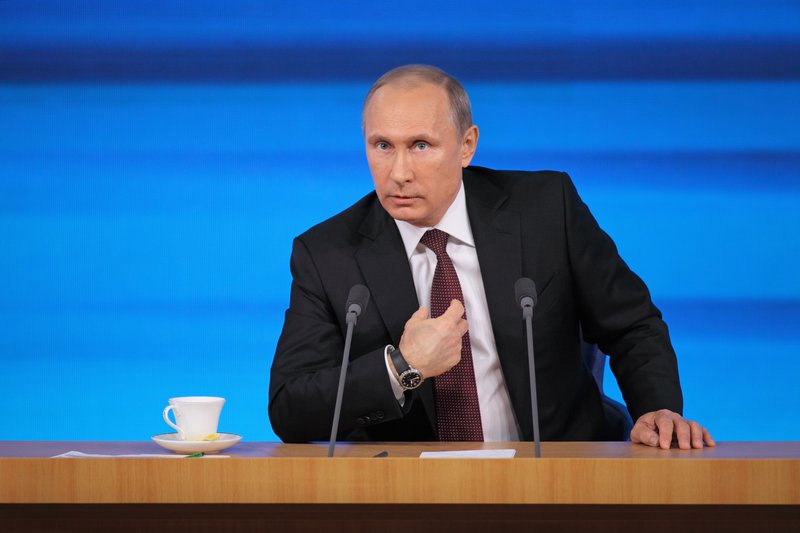 It could have been taken from a James Bond film.

A few days before the Democratic National Convention, emails suggesting the Party tried to stack the deck in favor of the establishment candidate were leaked by, according to many politicos and authorities alike, Russian hackers. The Russian government had already been seen as supporting Donald J. Trump, the Republican nominee and the candidate who has hinted he will withdraw U.S. support from NATO but get along well with the Russian president, one Vladimir Vladimirovich Putin (Trump has also credited Russians for the hack). Some said that Russia, which has been accused of backing parties and politicians sympathetic to its plight in Europe, was meddling in American affairs.

And critics are right to do so, and to do so in such a way that speaks to the seriousness of the situation. That a foreign country—and not just a foreign country! Russia!—is hacking servers to potentially intentionally impact an American election is no small thing. That this is a cybersecurity breach adds a whole other dimension, a new, dangerous spin on the old information wars. That Donald Trump then asked Russia to hack more of Hillary Clinton's emails—thereby essentially calling for a cyber attack on his own country—is also, for lack of other, better words, not good.

Nevertheless, this is not a James Bond film. And the reality is that Russia is doing to the U.S. what it believes the U.S. has long done to Russia—not in hacking, but in meddling in American affairs. And that, in getting Americans to blame Putin, the meddling Russians are duping us into acting like him, too.

We do not know for certain that Putin wants Trump to win. We can suspect so—Putin hates Hillary Clinton and has spoken warmly of the Donald, and his candidacy, which, in a twist that seems surprising until one remembers that we now live in the fun-house of 2016, led the GOP to put forth a more pro-Russian platform—but to say so affirmatively is simply to speculate.

But what we do know is that Putin perceives Americans as having long “meddled” in the electoral affairs of Russia and its surrounding countries. We know this because he has said so time and again. We know that, in Ukraine, America financially supports efforts for and by the government of Petro Poroshenko, put in place after pro-Russian, corrupt, but democratically elected Viktor Yanukovych was overthrown (a move Putin blamed on the West). We know that the Georgia of Mikheil Saakashvili, the anti-Russian former president of Georgia (now mayor of Odessa), was seen by some (in Russia and America) as a “[George W.] Bush project.” Michael McFaul, former ambassador to Russia, tweeted, in the wake of the email leak, that he wanted Russia to stop meddling in U.S. elections. One of McFaul’s first acts as ambassador was to meet with anti-Putin protesters (whom Putin called “paid agents of the West,” called to protest by none other than Hillary Clinton, then Secretary of State). In doing so, he was carrying out his job as a public servant and representative of the United States. But he was still perceived in intervening in elections in which he, as an American, was not supposed to participate. None of this is the same as hacking emails, but, as Matthew Rojansky, director of the Kennan Institute, pointed out on CNN, a taste of our own meddling medicine may be sweeter than any electoral outcome  to those sitting in the Kremlin who believed discontent in their own country was orchestrated by the West.

Which brings us to the second thing we know for certain: Vladimir Putin cannot elect Donald Trump. That is, he is not responsible for this election, just as Americans are not responsible for Yanukovych’s corruption, or Georgia’s Western aspirations, or protesters on the streets of Moscow. The United States may have tried to support what came after Maidan, but only a Russia Today devotee would believe that people took to the square because the West made them do it, and not because they were tired of their own government’s corruption. George W. Bush may have supported the Georgian government in place after the Rose Revolution, but it was Georgians, not Americans, who put that government in place, with all of the anti-Russian sentiment that implies. And Michael McFaul may have met with anti-Putin activists, but he is not the reason they were on the streets. Putin was. We know—surely we know—how it sounds when a group of people with power blame a foreign country for their ills instead of fixing their own problems. But we’re doing it ourselves. We cannot know for certain that that’s what Putin wants, but here, too, we can speculate that he might find the irony rich.

And if Trump wins in November, Putin, who is not an American citizen or registered voter, will not have made it happen; we ourselves will have done that.