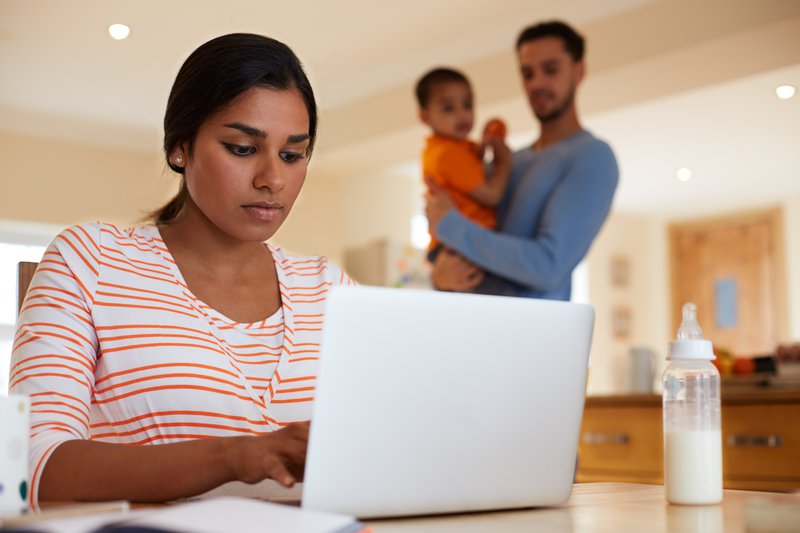 Unpaid work—the work upon which all other economic activity is built—was not mentioned in the keynotes of the Democratic or Republican National Conventions. It will probably not be mentioned much, if at all, between now and November. But now—as we ready for a shift in administrations and the alignment of America’s parties and politics—is the time for us to talk about what it means when so much labor in this country is unpaid and undervalued.

Why? Because unpaid work has yet to be claimed by Democrats or Republicans, and so has the potential to be understood as pre-partisan, a universal issue that all of us can get behind.

But what exactly constitutes unpaid work? Many people don’t know. Loosely defined, unpaid work is any type of activity or service that, on the “productive” market, would have a value. Staying at home to take care of an infant rather than placing them in child care; caring for an elderly or sick family member instead of paying a caregiver; cleaning the house rather than paying for a cleaning service—the tasks you could, and citizens of sufficient means do, outsource. Unpaid work makes work possible.

But unpaid work has a measurement problem. Because there is no global standard for measuring hours of unpaid work, it is not integrated into any mainstream productivity measurement, like GDP. As a recent piece from Better Life Lab’s Global Gender Parity Initiative states, “Though the daily tasks of a woman caring for a relative with an injury may be the same as that of a worker at a health facility, one is counted as employed—productive—in national economic measurements, while the efforts of the other remain unofficial and not recorded.” This means the majority of the population that does unpaid work appears to be “unproductive.” But the women—and everyone else!—who perform unpaid work on a daily basis know that they are anything but.

If there has ever been a time to talk about compensating unpaid work, that time is now. The fight for paid family leave—which would compensate parents for often-unpaid child care work—is coming to the forefront of our national conversation. It’s not just talk, either: New York just passed the most generous paid family leave policy in the country, and many other states and cities are pursuing paid leave legislation.

Unpaid internships, another common type of unpaid work, are also gaining recognition. In recent years, unpaid interns at Fox Searchlight Pictures, Hearst, Conde Nast, NBCUniversal, and other companies have sued their employers, arguing that they should have been paid for their work. Though the legal status of unpaid internships is still fuzzy, many of these lawsuits have ended in settlements retroactively compensating unpaid interns.

But it is not just parenting and interning. Unpaid work affects us all. When we asked Twitter users how unpaid work impacts their lives, the responses reflected the reality that work is as diverse as the people who do it.

First, we tend to talk about unpaid work in a gendered way because society tends to dole out unpaid work along similar lines. Though the balance is shifting, studies still show that unpaid work disproportionately falls on women. And discussions of unpaid work tend to center on caregiving—specifically, parenting. A recent Pew report on parenthood shows that, while the aggregate workload (including paid and unpaid work) between heterosexual parents is about the same, women shoulder a higher load when it comes to unpaid work and parenting responsibilities—often leaving them fulfilled, but exhausted. And caregiving extends beyond children: Many adults (again, the majority of them women) must care for aging relatives, and nearly half of those who do must also balance elder care with a full-time job.

.@NewAmerica #MyUnpaidWork is helping family members advocate for themselves in the healthcare system.


#myunpaidwork for many is caring for ill or elderly family - would cost US billions if they, mostly women, didn't do it,. #caringeconomy

But unpaid work is not just a discussion for the caregivers. It’s something that the vast majority of us encounter in some capacity.

We should note that, when we say unpaid work, we don’t necessarily mean “the work that drags you down.” It can mean work that you love, compensated or not. It can mean raising a beautiful baby, supporting a partner, volunteering for an organization you believe in, organizing around a social issue meaningful to you, or putting your heart into a creative labor of love. Responses we got during our Twitter chat reminded us, gently, that unpaid work can be completely rewarding—when it is voluntary.

#myunpaidwork that I enjoy is my blog and launching my online store: unpaid work for myself doesn't feel draining or unfair!

My 9 years as elected school board trustee was my ultimate #myunpaidwork @NewAmerica but so fulfilling! @regrule

I volunteer to teach, because I can't afford to live like that. #myunpaidwork

For many people, though, lack of compensation is not a choice, but a condition they are pushed into. And there are consequences. For individuals, it might mean forgoing potential earnings to care for a child or a parent, or hustling into an unpaid internship in order to stay competitive. For the economy, it means losing billions of dollars worldwide due to the absence of caregivers and women in the labor market. It means a persistent gender wage gap that stretches across disciplines. The bottom line: We should be talking about this.

And there is room in both parties to do just that. This effort—to recognize the inherent value of all work—has some predictable allies on the left: Hillary Clinton said in her remarks at the 1995 Fourth World Conference on Women, “We are the primary caretakers for most of the world’s children and elderly. Yet much of the work we do is not valued—not by economists, not by historians, not by popular culture, not by government leaders.” Democrats define themselves as champions for equity and progressive values, and see themselves as looking out for marginalized and underprivileged groups. Unpaid work is a crucial issue for Democratic-leaning constituencies like women, who do a disproportionate amount of unpaid care work, and young people, who struggle to get by in an economy reliant on unpaid internships. It’s little surprise, then, that Clinton’s presidential platform includes supports for unpaid work, like 12 weeks of paid family leave (although the campaign still doesn’t pay its interns).

But the Democratic Party isn’t the only ideological corner with support for valuing unpaid work. Americans across the political spectrum show strong support for several months of paid parental leave, for both mothers and fathers. Though Democrats support longer leave on average, Republicans and independents also seem to recognize the value of unpaid care work, at least in certain forms, and want to support it. Despite the ideological confusion gripping both parties, the GOP maintains strong support for “traditional marriage and family” as the foundation of our society. Traditional families of all socioeconomic backgrounds rely on women’s unpaid care work, and valuing this work would be a way for the Republican Party to better support families. And, again, parenting is not the only type of unpaid care work. America’s right-leaning elderly population is growing, and elder care will become an ever-more-important issue for those who are aging or have aging family members. This constituency needs unpaid work to be valued and supported.

Now is the time for politicians to invite their constituents to the conversation. And in this election season, mired by mudslinging and division, this is an opportunity to rally around something that is distinctly non-partisan. For politicians and policymakers to value all labor is no mean feat. But then, changing minds for the betterment of their society is the work for which we pay them.