Telling the Story of Unpaid Work

How can journalists write about unpaid work so that it has the maximum impact? 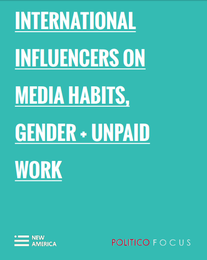 A new report from POLITICO Focus and New America’s Global Gender Parity Initiative maps the media consumption habits of international decision makers, and examines their attitudes toward and understanding of gender inequality and unpaid work in the U.S. and around the world. Those surveyed for the quantitative and qualitative parts of the research  included a select group of decisionmakers working in international finance and economic development as well as POLITICO's international readership (specifically those who opted into the publication’s U.S. and European newsletters focused on finance and money). Please find more information about the surveyed population inside the report.

The report highlights opportunities and approaches for journalists who cover those subjects.

Journalism can and should play a critical role in raising awareness and helping readers understand the impact of unpaid work on families and for society. While journalism can’t fix the data problem, it can help make unpaid work a priority issue for international organizations.