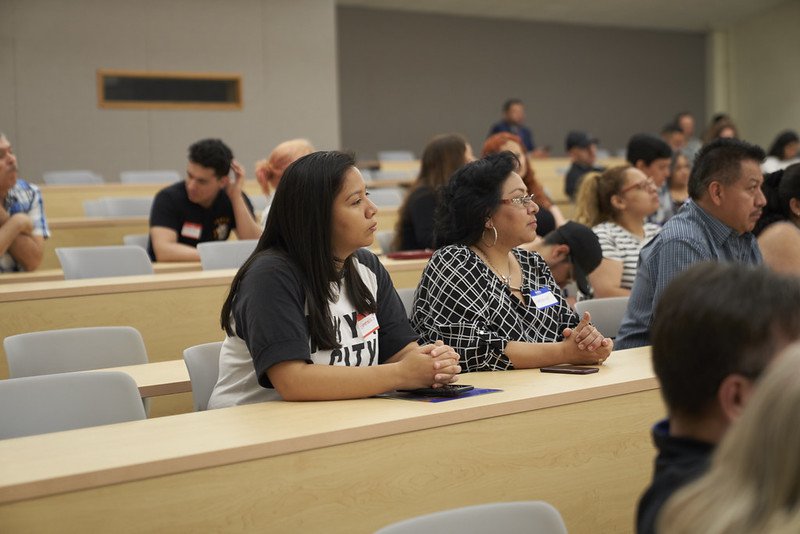 Last Saturday, Democratic presidential candidates had their first test among voters of color— specifically, Latinx voters. Sen. Bernie Sanders won 53 percent of the Latinx vote, with no other candidate receiving more than 20 percent: a result that’s being attributed to his ground game engagement and consistent messaging on the economy, healthcare, and education—topics that consistently top Latinx voters’ list of priorities.

Nevada, however, is only a prelude of what’s to come. The second largest racial group behind whites, the Latinx population is one of America’s fastest growing voter blocks—and it’s poised to have an enormous impact on the upcoming election and all future national contests.

So, less than a week out from Super Tuesday—where the democratic nominee will be chosen by California, Texas, and other states with large Latinx communities—what can the candidates do to capture the attention of Latinx voters?

In short, Latinx students are a major presence in U.S. schools—and our country’s future hinges on their academic success.

Sen. Sanders was the first to introduce the idea of free college into the national discourse during the 2016 Democratic presidential primary; four years later, all of the 2020 Democratic candidates have proposed some form of a free college plan. Free college, in addition to being a great tagline, would make meaningful strides toward helping low-income Latinx students access college—but candidates should also prioritize everything leading up to that step. Despite some academic gains over the past 20 years, Latinx students remain far behind their peers when it comes to academic attainment—while Latinx college enrollment rates have increased, for instance, Latinx students are still less likely than other racial and ethnic groups to obtain a four-year degree.

Teachers are a crucial element for closing these achievement and attainment gaps. Various studies have found that students of color assigned to teachers who reflect their cultural, racial, and/or linguistic background experience positive academic perceptions and attitudes, reduced chances of dropping out of school, and an increased likelihood of attending college.

Unfortunately, only 9 percent of the teacher workforce is Latinx—a stark contrast to the 25 percent student population.

This demographic mismatch is increasingly capturing the attention of policymakers and journalists across the country. But in order to narrow the gap between Latinx students and teachers, more Latinx individuals need to be eligible to become teachers. And that means more Latinx students graduating from high school, enrolling in college, and completing a bachelor’s degree.

Various academic, financial, and sociocultural hurdles stand in their way. While these challenges begin with early inequities in education, some of the biggest issues for Latinx students are successfully transitioning from high school to college, and transferring from two-year to four-year colleges. For instance, almost half (44 percent) of Latinx college students nationwide are the first in their family to attend college, compared to 22 percent of white students—a significant disadvantage when it comes to negotiating the potential pitfalls of higher education.

Students pursuing a teaching degree face additional barriers to entry: Teacher candidates, for instance, typically have to take a basic skills test and a content-specific test in order to complete their degree and become certified. Latinx candidates are about 20 percent less likely to pass these tests than their white peers—a disparity that could be explained by a variety of factors, including testing bias and inadequate PreK–12 preparation.

In order to recruit future teachers, and ensure that they are prepared to succeed in postsecondary education, colleges cannot do this work in isolation from PreK–12 schools—and vice versa. Addressing these challenges requires partnerships between PreK–12 and higher education systems that recognize the unique difficulties Latinx students—particularly first-generation, low-income Latinx students—face in accessing and navigating higher education. These partnerships can provide concrete support structures to help students stay on their academic path and enter the teaching profession. A U.S. Department of Education grant aimed at developing capacity within Hispanic-Serving Institutions, for instance, helped the University of Texas at San Antonio recruit Latinx students from high schools and community colleges into critical teaching shortage areas, facilitating smooth transitions for aspiring Latinx teachers to and through UTSA’s education program.

While all of the 2020 Democratic candidates have put forth plans to increase teacher pay as a way to recruit and retain more teachers, there are scant proposals addressing the challenges students face early on in their path to teaching. Candidates would be wise to consider how to best incentivize and fund collaboration between PreK–12 and higher education.

Some candidates are notably putting forward plans that could help Latinx students overcome these barriers. Former Vice President Joe Biden has proposed partnerships between high schools, community colleges, and employers so that students can earn industry-recognized credentials—partnerships that could also be used to recruit high school students into the teaching profession. Pete Buttigieg has also pledged to increase investments in high school career and technical education, and Sen. Elizabeth Warren has proposed increasing funding for the Teacher Quality Partnership Grants—which fund partnerships between educator preparation programs and high-need school districts—in order to expand the quality and diversity of teachers entering the profession. Biden and Buttigieg have proposed increasing investments in Hispanic-Serving Institutions—institutions with an enrollment of at least 25 percent Latinx students—while Sanders and Warren have both pledged more investment generally in minority-serving institutions, in addition to making education at these institutions debt-free.

These plans are promising, but they rarely make it onto the debate stage or into stump speeches. They are, however, being closely scrutinized by a community that consistently ranks education as one of its top election issues—and in the lead-up to Super Tuesday, the Democratic candidates would do well to keep that in mind.