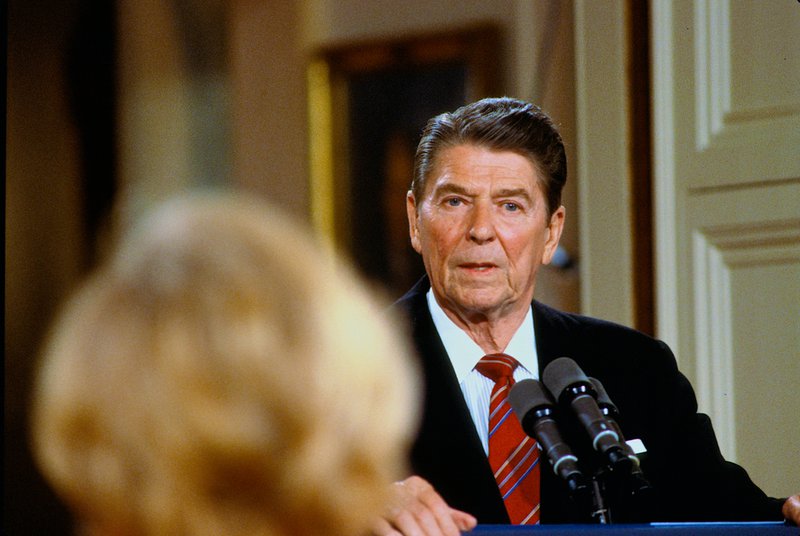 This year, John Badham’s WarGames—one of the movies most beloved by hackers, techies, and tech policy wonks (like me!)—celebrates its 35th anniversary. Though it may look a little kitschy now, it was notable for several firsts: It was the first popular film depiction of the now well-known hacker archetype. It raised the specter of an artificial intelligence starting World War III a year before James Cameron’s The Terminator did, and it introduced America to a young Matthew Broderick. WarGames is the alternately lighthearted and deadly serious tale of a wargaming A.I. at U.S. missile command that almost sparks a nuclear war after being broken into by a troublesome but well-intentioned teenage hacker. Some of the technology in WarGames is almost comically outdated, like the hero’s 1200 baud dial-up modem that connects to his cradle phone via an acoustic coupler, but it offers a jumping-off point for so many rich conversations about issues that are still relevant: A.I., autonomous weaponry, computer crime law, cybersecurity, and cyberwar. It is also one of the best examples of science fiction directly influencing policy in Washington—just one of several such examples during the Reagan years.

Ronald Reagan, a former Hollywood star, screened WarGames at Camp David the weekend it was released, and it freaked him out. As Slate’s Fred Kaplan described in his book Dark Territory: The Secret History of Cyber War, Reagan brought it up a few day later at a White House meeting that included the chairman of the Joint Chiefs of Staff and asked, “Could something like this really happen? Could someone break into our most sensitive computers?” The answer came back a week later: “Mr. President, the problem is much worse than you think.” That led not only to a significant revamp of how computer security was handled at the Defense Department, but also passage of an anti-hacking law that would eventually evolve into our current Computer Fraud and Abuse Act. Clips of WarGames were shown during the congressional hearings where lawmakers debated the need for hacking legislation.

Rather than an isolated incident, WarGames’ impact on Reagan is just one example of how science fiction influenced his administration and his life. Reagan grew up devouring fantastic sci-fi tales like Edgar Rice Burroughs’ John Carter of Mars stories. He was also a huge fan of The Day the Earth Stood Still and its anti–nuclear war rhetoric, so much so that he had a habit—which drove Gen. Colin Powell crazy—of talking in public about how the U.S. and the USSR would certainly resolve their differences and unite if only aliens invaded. Reagan even brought this theory up in a private meeting with Mikhail Gorbachev, which left his Russian counterpart flummoxed.

However, the biggest sci-fi influence on Reagan—arguably the biggest example of sci-fi influence on policy ever—came directly from a group of sci-fi writers and aerospace professionals. The Citizens Advisory Council on National Space Policy was primarily led by two sci-fi writers: Larry Niven, best known for the sci-fi classic Ringworld, hosted a council meeting of dozens of authors and experts at his home over a long weekend shortly after Reagan’s election. That meeting was organized and led by his friend and regular co-author Jerry Pournelle, who died in 2017. As Niven recently told me in a phone interview, the conservative cold warrior Pournelle was “the beginning, the middle, and the end” of the council and its proposals for the future of America’s presence in space. Several of Pournelle’s ideas were distinctly ahead of their time—ideas about mining asteroids for mineral resources, or developing reusable rockets that could take off and land vertically “just as God and [legendary sci-fi writer] Robert Heinlein intended,” as he once put it. (That’s a phrase Sigma Forum founder Arlan Andrews Sr. first used in 1993 in the sci-fi magazine Analog.)* That proposal ultimately led to Vice President Dan Quayle supporting the development of the DC-X test rocket that Elon Musk has credited as a key predecessor to the reusable rocket systems now deployed by SpaceX.

One idea from the council particularly captured Reagan’s imagination. The president even took language directly from the reports prepared for him by the council for his 1983 speech unveiling a new initiative, an announcement Reagan made with little to no consultation with his own experts. According to the book Reign of Fantasy: The Political Roots of Reagan’s Star Wars Policy, an actual White House technical adviser later said, “We were stunned. … [T]he whole thing was just nutty, because it was content-free—it was a challenge to the scientific community to go invent something.”

So, what was this sci-fi–inspired strategic military initiative from a celebrity president with no military or technical expertise?

Just kidding. It was the Strategic Defense Initiative, also derisively known as “Star Wars”: the notional orbital laser missile shield to protect us against the “Evil Empire” of the Soviet Union. The U.S. government would eventually spend billions of dollars on it, with very little to show for it in terms of effective interception of nuclear missiles. Pournelle thought that this “star shield,” as Niven called it when I spoke to him, could provide “Mutually Assured Survival” in the face of mutually assured destruction, though other experts—including sci-fi authors like Isaac Asimov and Arthur C. Clarke—criticized it as a technically impossible boondoggle, and political and budgetary support for the idea collapsed by the ’90s.

Some have theorized that Reagan jumped at the idea of SDI because the central technology in his 1940 spy adventure movie Murder in the Air was a powerful death ray that could shoot missiles out of the sky. Others have wondered whether the five-feet-thick glass domes that protected Martians from bombardment in the John Carter books primed him for the idea of a global anti-missile dome. Whether or not these theories are true, there’s no question that sci-fi writers like Niven and Pournelle directly influenced Reagan’s thinking on SDI, just as WarGames directly influenced his thinking on hackers.

Now, 35 years later, there’s a think tank composed solely of sci-fi writers who consult with three letter agencies, the Marines are using sci-fi to better imagine the future of war, the Army Cyber Institute is modeling future threats using sci-fi graphic novels, and the sci-fi war thriller Ghost Fleet is being taught in military academies. Reagan’s Star Wars initiative may have fizzled, and the Computer Fraud and Abuse Act may be deeply flawed. But his approach here was ahead of its time, as science-fictional thinking has become a widely accepted tool for imagining the wargames of tomorrow.