Here's What the Pandemic Is Doing to Trump's Reelection Prospects 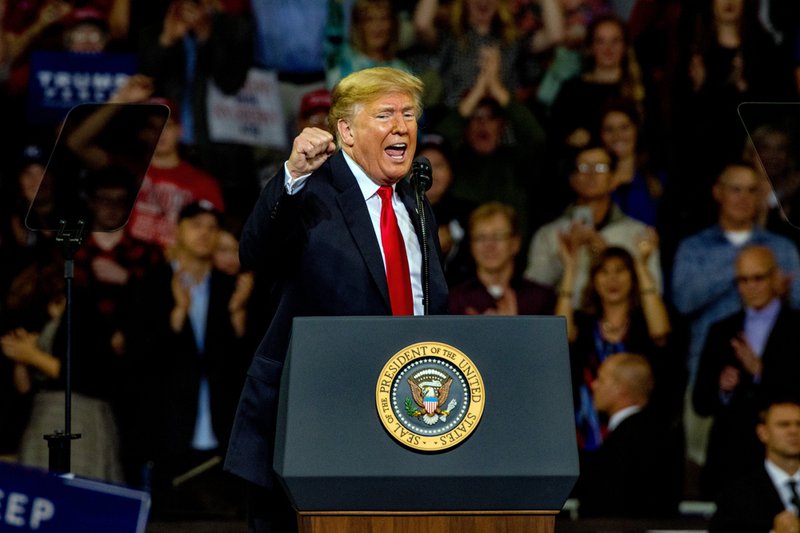 It’s the rare election that doesn’t occur during a major geopolitical upheaval or natural disaster. In November 2008, the U.S. unemployment rate had surpassed 6.7 percent—well on its way to a Great Recession peak of 10 percent in August 2009—and 29 years before that, 52 Americans were taken hostage in the U.S. embassy in Tehran. But while some degree of tumult is baked into voters’ electoral decisions, an emergency on the scale of the COVID-19 pandemic can upend many of the assumptions we typically make about presidential elections.

So, can historical precedent and available data tell us anything about Trump’s prospects for reelection?

The history of presidential polling doesn’t go back quite far enough for us to comment on the trajectory of each president who failed to win reelection—but it does allow us to use Herbert Hoover as an illustrative example. While 1932 found the nation several years into the Great Depression, there is evidence that Hoover was at least equally stymied by his support for Prohibition—a stance Franklin D. Roosevelt exploited freely. In fact, on economic issues, voters were sometimes reluctant to assign blame to Hoover directly: While a share of those polled in a study of Hoover’s reelection odds believed he was ultimately responsible for the economic woes of the time, respondents were also likely to blame Wall Street and the government as a whole.

In this context, Trump and GOP leaders’ rebranding of COVID-19 as “Chinese virus” and "Wuhan virus" reveals a potential strategy: Muddy the waters and hide the fact that ours has been one of the least effective responses by nations impacted, with well-documented failure on the part of administration leaders tapped to handle the response. Republicans, in this case, are seeking to achieve a dilution of public blame similar to what was seen during the Hoover administration—but without the ultimate electoral loss.

What do polls show about the effectiveness of these strategies? Using a FiveThirtyEight interactive, we can compare the current segment of the presidency overseen by Trump (i.e., the first 1,203 days, as of this writing) to the same segment for past presidents.

Of the first six post-World War II presidents, all but Gerald Ford followed a fairly similar trajectory: Except for a segment of Truman’s presidency, they enjoyed net approval ratings well into the +40 percent to +60 percent range (Eisenhower never dipped below +30 percent, for example, while John F. Kennedy only spent a few weeks below +40 percent). Trump, on the other hand, has been underwater for basically the entirety of his presidency, dipping below -20 percent. Thus, the first conclusion is a simple but necessary one: While Trump would like to call himself a wartime president, measurements of his popularity don’t look like those of wartime presidents—at least, not wars that glitter in the popular imagination. Instead, it resembles public opinion associated with presidents who led the country’s post-Vietnam foreign involvement—conflicts that have generally sapped public support.

Since Ford left office in 1977, we’ve seen greater variation in the ratings by president, but the overall trend has still been a noted decline—the average net approval in the first 1,203 days of the six most recent presidents appears to be around five to 15 percent. By comparison, the first six post-WWII presidents were sitting closer to 20 to 30 percent (inclusive of Ford, who drags the average down considerably). Most commanders-in-chief in the post-Ford 1977-2017 timeframe saw a similar trajectory: relatively high net approval at election (an average of approximately +30 percent), followed by a gradual decline toward zero and only minor vacillation above/below the net-zero line through the end of the 1,203-day period.

In short, in the modern era, polls indicate that there is no such thing as a broadly popular president—and Trump is the starkest example we’ve had.

With Trump, you see the effect of ‘Teflon Don’ working in reverse—while both George W. Bush and George H.W. Bush saw relatively high flash points despite ultimately sinking into low approval ratings, Trump has been in a trough since day one. This has basically carried over throughout the duration of the administration’s COVID-19 response: Although polling done in the middle of February and the beginning of April shows a slight uptick in the president’s popularity, at no point during the pandemic has Trump seen net positive ratings. (George W. Bush, meanwhile, saw a 60-point gain in his net approval rating following 9/11.)

In March, Congress passed all the necessary legislation on a $2.2 trillion stimulus package, which was signed into law by Trump as the CARES Act. While the figure is subject to adjustment, the record sum will almost certainly be at least three times the original value of the 2008 bailout ($787 billion) and larger even than the “revised” estimate ($831 billion). At the same time, more than three million Americans filed for unemployment in the third week of March (compared to 192,023 claims for the same week in 2019), and more than six million initial claims were filed in each of the two weeks after—largely resembling the kind of localized economic impact we see in the wake of a Hurricane Katrina-grade natural disaster.

Readers familiar with election predictions know that the models aren’t just based on public opinion polling. Objective economic indicators—especially leading economic indicators (LEI), such as those used by the Conference Board to predict economic downturns—feature heavily in many election prediction models. Political scientists examining economic voting often focus on how voters interact with the economy writ large, including the level at which voters associate the economy with the presidency (i.e., is their vote based on their own economic situation, or the economy as a whole?) and the timing (i.e., do voters mostly conduct retroactive economic assessments and ‘assign grades’ at the ballot box, or do they project forward and make educated guesses about which candidate will do the best job with the economy?). As it happens, research suggests that voters mostly evaluate the economy retroactively, and at the aggregate level—two potential demerits for the incumbent president.

So, what are Trump’s chances under an economically-derived presidential forecast model?

In March, Alan Abramowitz of Emory University published a table of possible predictions based on his economic model (often referred to as the ‘time-for-a-change’ model because it takes into account the partisan baggage non-incumbent candidates can carry in an election—for example, John McCain tanking after two consecutive Bush terms). Abramowitz’s analysis presents a straightforward case: Assuming a net Trump approval of -5 percent in June 2020—an entirely plausible scenario—Trump needs the economy to grow by 1 percent GDP in order to be the probable winner in November. Moving into more realistic economic scenarios (i.e., the economy shrinking by 1 percent or more), Trump’s reelection becomes increasingly unlikely. Not included in the table is the June 2020 net approval Trump would need to win reelection if there’s even a 1 percent contraction in GDP—which can be extrapolated to be at approval levels not seen at any point during his presidency.

Should you bet the house on Trump losing in November? Well, no. You’ve probably heard this adage a lot in the past several weeks: All models are wrong, even if some are useful. Trump’s 2016 victory was, according to mainstream media consensus, not the likely outcome. More pertinently, all of the prominent election models are conditional: If the economy takes a dip, and/or if Trump’s net approval sees a sharp drop, then his chances for re-election decline pretty quickly.

The issue for Trump, of course, is that a lot of arrows point to precisely both of these trends materializing. We’re already seeing macroeconomic records broken in both unemployment claims and the scale of fiscal stimulus interventions. Assuming leading forecasters’ Q3 and Q4 2020 estimates are correct, election prediction models will turn away from Trump as the favored candidate. For the last two months, we’ve seen Trump’s base wavering in their support; the ‘stickiness’ of formerly Democrat voters who pulled the lever for Trump in 2016 is similarly being tested.

The details of a recovery from the looming recession will be important—while Democrats have an opportunity to score policy victories over the roadblocks of Mitch McConnell and the rest of the Senate Republicans, Trump and the GOP could also effectively own the conversation and perceived benefits. Messaging, in addition to the empirical economic reality, will play a key role: To the extent that voters remember any of these details in November, who will they blame for lost wages and rising premiums, and who will they praise for stimulus checks and small business loans?

Nationally, what happens over the next six months will likely hurt Trump’s chances for reelection. But, as we were reminded in 2016, the U.S. presidential election is not a national referendum.

What do economic models tell us about decisive swing states?

The United States is in an era of extremely close elections—as I previously observed, 50 congressional races in 2018 were decided by five points or less. Trump won Michigan, Pennsylvania, and Wisconsin by no more than 0.77 percent.

In this climate, the ultimate outcome in November hinges on many factors influencing small margins in elections around the country, including those in pivot counties—that is, counties that voted for Obama twice and then swung for Trump in 2016.

Some of these counties are in states that are fairly safe bets for Trump in November—the five in Georgia, for example, as well as the two in Mississippi. However, the combined nine pivot counties in Florida and Georgia went for Trump by an average of just 5 percent in 2016—and the average across all pivot counties, which includes dozens in purple states, was just 11.5 percent in Trump’s favor. Thus, while some races may be relatively decided, many others remain in play for 2020.

So, what’s the economic situation in these areas?

Even as some states relax restrictions, the economy will still take time to bounce back—the millions who filed unemployment claims since lockdown orders were initiated won't get their jobs back overnight. Businesses are closing due to coronavirus-related pressures, with retailers as large as J. Crew declaring bankruptcy. In March, the national unemployment rate had already increased year-over-year (YoY) by about 0.60 percentage points, and the rate in April (14.7 percent) was 11.1 percentage points higher than the rate in April 2019 (3.6 percent).

Importantly, the effect isn’t homogenous across the country; many areas around the country had relatively lower unemployment rates in March 2020 compared to March 2019. As it happens, the map of these areas might seem somewhat familiar:

This means that, according to March 2020 BLS data, some parts of the country that swung for Trump after voting twice for Obama are doing relatively well. And what does that mean? Well, according to economic voting models, Trump has a pretty good chance of hanging onto these counties—not a guarantee, of course, but a decent shot.

While this glimpse into the Midwest and New England suggests relatively rosy prospects for a Trump victory, the same can’t be said of two other states important for 2020: Florida, which is red-leaning-purple, and Pennsylvania, which is purple-leaning-blue. The former is showing some worrying signs for Trump: Across Florida, unemployment grew by 1.1 percentage point YoY in March 2020, with Homosassa Springs (+1.7 pp) and Sebring (+1.6 pp) climbing closer to 2 points. None of Florida’s pivot counties, which Trump won by an average of just 3.85 percent in 2016, are even near areas with less than a one percentage point increase in unemployment.

All said, whether you’re looking at public opinion polling or economic models or both, much remains uncertain. We can make data-driven predictions about voting behavior in pivot counties, but the fact remains that millions of people are making decisions based on any number of factors—rational and emotional. Still, in looking at the conditions in these areas, it doesn’t take a great leap of faith to envision Trump’s ultimate loss this November.