Can You Hear Them Now? 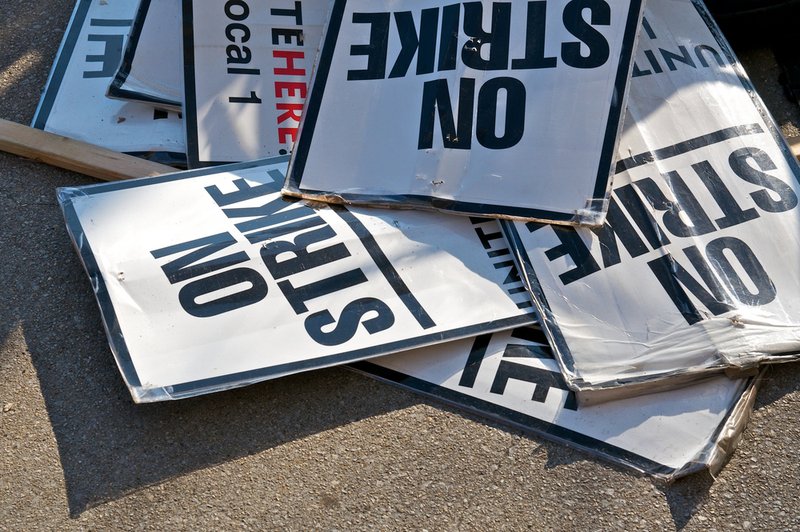 The Verizon strike, now in its second week, represents one of the country’s largest walk-outs in recent history; 40,000 union workers are making up the picket lines. It’s also emblematic of an issue at the forefront of the presidential primary season: the changing nature of work. As employers threaten to further thin the prevalence of good-paying jobs and benefits, more and more voters are looking to Washington to place blame—and to find help.

At the heart of the Verizon strike, according to a statement by International Brotherhood of Electrical Workers President Lonnie R. Stephenson, “[is Verizon’s] insistence on gutting job security, retirement security and outsourcing good American jobs overseas.” The issues behind this strike—job security and employer-employee relations in the United States—are also the issues front and center in the current election cycle.

In an effort to show solidarity with striking Verizon workers, Democratic presidential candidates Bernie Sanders and Hillary Clinton joined the picket lines. Sanders went as far as to spar with Verizon CEO Lowell McAdam on social media—in a LinkedIn post, McAdam’s charged Sanders with "oversimplify[ing] the complex forces operating in today's technologically advanced and hyper-competitive economy." He concluded that Americans "deserve better from people aspiring to be president." Sanders responded with two tweets: “I don’t want the support of McAdam, Immelt and their friends in the billionaire class. I welcome their contempt.... What I care about is that they stop destroying the jobs of their employees and start investing in cities like Buffalo and Baltimore.”

In contrast, Republican presidential candidates have remained mum on the strike. But, if it maintains momentum, the issue is likely to find its way into the party’s primary, especially because frontrunner Donald Trump has made outsourcing jobs, which precipitated the strike, a major tenet of his campaign.

To truly get a handle on the larger issue the strike represents, however, presidential candidates must do more than march and tweet or tacitly hope for resolution. They need to consider the ways in which companies are relinquishing long-held obligations to their workers.

Access to a reasonable level of security through basic wages and opportunities for advancement, benefits, and labor protections is being chipped away. Corporate profits may have skyrocketed in recent years, but wages have hardly budged. Between 1973 - 2014, national productivity grew at a rate of 7.8 times that of employee compensation. At the same time, benefits have been slashed. Take pensions, for example: a mainstay fixture in yesteryear America, pensions, which guaranteed employers would provide for employees in retirement, comprised 62 percent of retirement plans in 1979 but were a mere seven 7 percent in 2011. 401(k)s were used to shift the responsibility of saving for retirement from employers to employees, and the result has been disastrous. The median working-age family now holds a mere $5,000 in its retirement accounts.

Grimmer still are the prospects of part-time, contract, and temporary workers to whom no benefits are offered, who have no picket line. These workers often independently shoulder the burden of protecting themselves from misfortune, financing their own health insurance and retirement with no paid medical leave, no workers’ compensation, and no unemployment benefits. Meanwhile, several recent local and state initiatives to boost earnings for low-wage workers have been tied to the employee-employer relationship, excluding those with less traditional (though increasingly common) work arrangements. Consequently, such initiatives were antiquated at inception. This has long been a method by which corporations shirk responsibility for the well-being of their workers—that is, never technically employing them in the first place.

In recent years, corporations have increasingly contracted with so-called “self-employed” workers (also referred to as independent contractors and temps), for whom they provide little to nothing in the way of security. While there are of course authentically self-employed workers included in this definition, it is also being used to describe those who regularly work for one company with little control over the nature and results of their work. Tech-savvy companies like Uber, which contract with thousands of self-employed drivers, get a lot of attention, but in actuality they are only a small fraction of the employers that are engaged in these labor practices. A recent National Bureau of Economic Research (NBER) study found that all of the job growth in the past decade can be attributed to an increase in the number of self-employed workers. In 2015, 15.8 percent of all workers had these alternative work arrangements, compared to 10.1 percent in 2005.

Despite alternative work arrangements gaining ground, many local and state initiatives to boost earnings and improve conditions for workers are not extended to the self-employed. Dozens of cities and states have either explored or passed ordinances to raise their minimum wages. In 2014, a number of U.S. cities, including San Francisco, Seattle, and Los Angeles, approved the gradual raising of their minimum wages to $15 an hour. And 16 states will raise their minimum wages this year. While these increases are important and will improve quality of life for many, they miss self-employed workers.

Some measures intentionally exclude those with alternative work arrangements, sometimes with flimsy reasoning for doing so. For example, self-employed workers in California cannot claim the state’s new earned income tax credit (EITC). Taking “several steps to limit potential overpayments,” the state decided self-employed tax filers would not be eligible for the credit. However, only 30 percent of inaccurate payments are “related [to] reporting of wage, self-employment, and other income.” And the majority of improper payments in the federal EITC are due to complex rules around who can claim a child, as opposed to intentional fraud. Not to mention, the California EITC phases out as the federal EITC peaks. So if someone wanted to game this system by adjusting their income to maximize their return, they would need to report too much income to be eligible for the state EITC.

If all workers could put the money that they’re spending to attain basic security toward other financial goals—like their children’s college fund—perhaps 90 percent of workers wouldn’t report being stressed out about their personal finances. This could translate to higher productivity too, because workers report that budget anxiety distracts them from their jobs.

Fortunately, there are a host of policies that could put more money into the pockets of workers, regardless of employment status. Policymakers should seriously consider reclassifying self-employed work, establishing a set of benefits that are portable and/or not tied to employment but citizenship, investing in worker-owned enterprises, as profits are more likely to remain and circulate within the community, and instituting universal basic income or childcare allowances. And they should understand that, to enable all workers—both those at risk of losing security and those who never had any—to realize higher earnings, accumulate savings, and achieve mobility, we must pursue modern policies that are built on a foundation independent of the generosity of an individual’s workplace.

The Verizon strike is not a one-off; rather, employers are increasingly passing the buck on to their workers. But if the private sector no longer believes that it has a role in the welfare of its workers, there are other, more inclusive options. The winning presidential candidate in November is likely to be the one who puts forth a plan to help more Americans stay not on picket lines, but on the path to the middle-class.