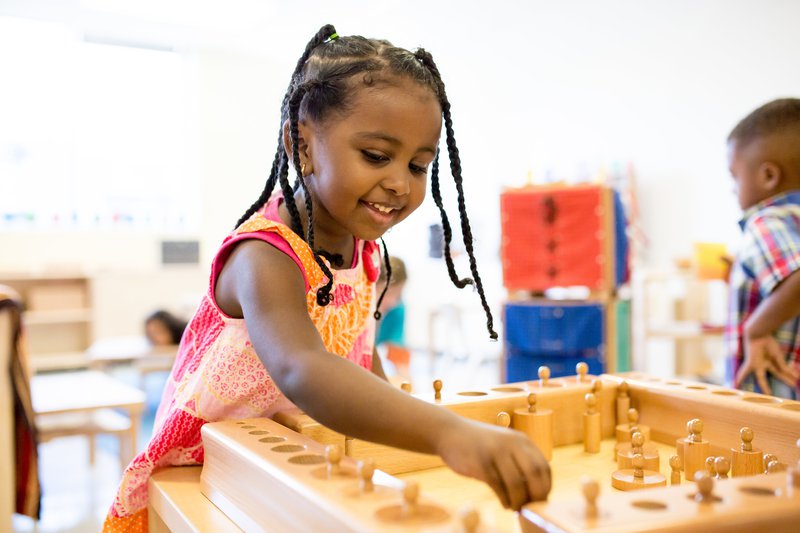 Last September, in a surprise announcement on Twitter, Amazon founder Jeff Bezos declared that he would give away $2 billion to support struggling families and develop a preschool network. The news sent a lightning bolt through the world of early childhood, which is much more familiar with scarcity and budget cuts than it is with billion-dollar investments.

Today, six months later, the air is still charged with speculation about what Bezos has in mind—but it is now coupled with some concern about if and how these words might be put into action.

His Twitter message said that he would “launch and operate a network of high-quality, full scholarship, Montessori-inspired preschools in underserved communities,” and Montessori experts in particular were celebrating. If designed well, such a preschool network could help thousands of children, plus lead to positive ripple effects for existing programs. Education leaders, including the Montessori Leaders Collaborative, sent Bezos letters and packets of information to help him formulate his ideas. “It is very exciting for Montessori to get this spotlight, and it is ready to shine,” Elizabeth Bruno, president of the Brady Education Foundation, which funds research on public Montessori programs, told me a few weeks after the announcement.

To date, however, Bruno and other leaders in the field of Montessori education have not heard anything from Bezos, nor from the Day 1 Academies Fund, the organization Bezos founded to distribute his donations. In January, Bezos announced the appointment of Michael M. George, a former vice president at Amazon who was in charge of Alexa and Echo, to run the fund. George’s background on his LinkedIn page does not include any reference to having worked in early childhood or social services. Amazon’s spokesperson would not comment on George’s appointment, and there are no outward signs of George gathering information on preschool programs or conducting listening sessions with early education leaders.

Does this portend the creation of a program that falls way short of its promise? Or does it simply show a willingness to take it slow? Bezos might not have recognized this when he tweeted about preschool, but creating a network of early childhood programs will not be a simple matter. It may seem very different from his Blue Origin enterprise, but in many ways, supporting the brain development and learning capabilities of our next generation is no less complex than—and certainly as important as—sending humans into space. And modeling a program on the insights of Maria Montessori, the physician-scientist who became an international giant in the field of child development, requires real attention to what works.

Spend a morning at Breakthrough Montessori, a publicly funded school in Washington, D.C., and you can start to see that complexity. For example, if you came to observe one day recently, you might notice that it was not set up like a normal classroom. The kids are not cross-legged on the carpet, facing a teacher. They were not told to stay quiet, nor were they repeating lines from a storybook. Twenty-one children, ages 3 through 6, were sitting at tables or on the floor, independently working on projects.

One little girl, an African American child in a Minions T-shirt, stood back from a structure of blocks that she had carefully placed together, with one end made of a few blocks laid horizontally while blocks at the other end were stacked precariously high. “Which one is bigger?” she asked. A white boy in dinosaur slippers came over, pointed to the larger side, and exclaimed, “This one!” The girl nodded confidently.

The room felt calm and purposeful, even as it hummed with the sounds of children.

Creating this kind of environment requires teachers who have years of training and knowledge of how to foster children’s trajectories of learning across multiple subjects and how to make the most of minute-by-minute interactions to guide their explorations. Most American children in mid-to-low-income families do not have access to programs at this level of quality; they are either too expensive (upwards of $10,000 to even $20,000 a year) or don’t exist in their neighborhoods. Some families can try to enroll their kids in Head Start or public pre-K—43 states fund pre-K so far, according to the National Institute for Early Education Research—but those programs receive only enough funding to cover a fraction of eligible children. States, cities, and higher-ed institutions typically don’t provide the scholarships, higher salaries, professional development for current teachers, and reforms to teacher preparation programs needed to build a sustainable workforce.

Yet the work is undoubtedly worth doing. Research shows that children in quality pre-K programs can gain skills across literacy, math, and social-emotional development, narrowing gaps that emerge in households with limited access to financial resources and educational opportunities. Some studies show gains lasting well into adulthood. Making a difference will require not only more funding from governments and private donors like Bezos. It will also require a commitment to investing in the ingredients that help children thrive academically and socially and develop positive habits of mind. Many studies of pre-K programs have shown, for example, that good results are associated with giving teachers quality professional learning opportunities, paying them a wage on par with elementary school teachers, supporting the use of effective curricula and other instructional materials, and engaging in partnerships with families.

For Montessori in particular, relatively new studies show public programs making a difference for young kids. And public Montessori schools are growing in number. Of the 523 public programs in the United States, more than half have opened in the past 15 years, according to Jacqueline Cossentino, director of research for the National Center for Montessori in the Public Sector.

The Breakthrough Montessori School in Washington, D.C., is one of those new public schools. Its students come from all over and are of many different races, ethnicities, and economic backgrounds. Some have likely come from households coping with depression, loss, frequent moves from place to place, or even violence. Those hardships can show up in myriad ways. The same morning that the girl in the Minions T-shirt was building her block tower, outside in the hallway a little boy was screaming, thrashing, and throwing himself around on the floor. A young woman—probably an assistant teacher—was with him, struggling to put her arms around him long enough to calm him down. Helping children through outbursts can be among the most difficult parts of a teacher’s role. New professional development programs on “trauma-informed practice” are opening up around the country to help teachers gain those skills.

Part of Bezos’ challenge will be figuring out how his preschool network can include this complicated set of components that make up a quality program. “There are a number of examples of Montessori being well done,” Angeline Lillard, a psychology professor at the University of Virginia and the author of many studies on Montessori schools, said to me. “I would start with going to them and talking to the people there.” Maybe that learning should include sitting on a little wooden chair at the Breakthrough Montessori School, watching a bright-eyed child building with blocks and talking about what she plans to do next.