The End of Roe v. Wade Must Force a Reckoning about Our Families’ Futures 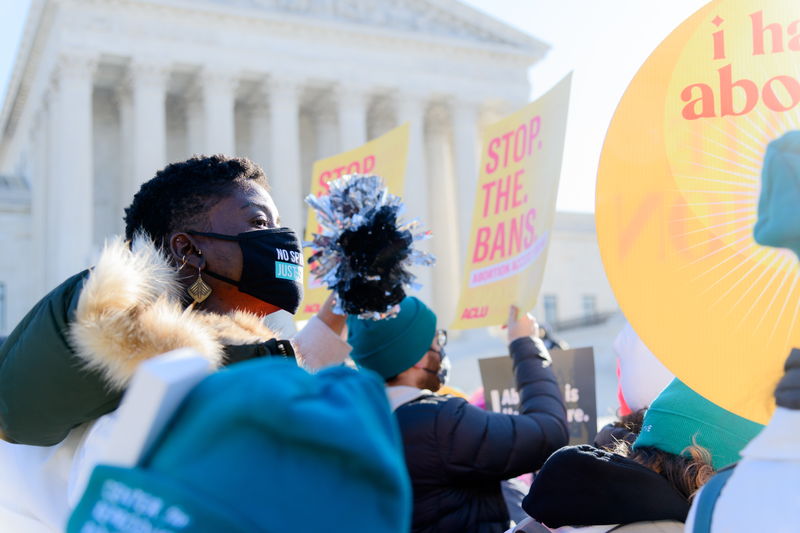 I am angry. My heart aches for millions of currently pregnant people and those who will become pregnant in the future, with fewer options to make personal decisions about their reproductive lives and no additional support from our country’s public policies to help support a child. My heart aches and my blood boils for this country and the paradoxes we are forced to endure with respect to freedom, autonomy, privacy, and so-called family values. This decision and its implications are the result of intentional investments on the political right over many decades, from building the Federalist Society to crafting anti-abortion legislation, undermining voting rights, and eroding campaign finance rules in state legislatures so that the will of the people — a majority of whom believe in abortion rights — can be thwarted.

The decision in Dobbs v. Jackson Women’s Health is devastating. It guts five decades of legal precedent established by Roe v. Wade in 1973. This decision could lead 26 states to move quickly to ban abortion, leaving at least 36 million people without access — a consequence that will disproportionately impact those already facing the greatest barriers to healthcare, including Black, Latine, Asian American and Pacific Islander, and Indigenous communities, people with low incomes, LGBTQ+ people, immigrants, and people living in rural areas. Already, since the Dobbs decision was handed down three days ago, seven states have banned abortion, and more are expected to do so imminently.

There is immediate work to do to safeguard and expand the right to abortion in states that continue to recognize reproductive healthcare as essential, ensure people who need reproductive healthcare and access to abortion can get it, and prevent as many unneccessary deaths and as much suffering as possible. Resources and links at the end of this piece are good starting points for these most immediate activities.

And we need to do more. With the end of Roe and a federal right to abortion, public officials — both those who have long championed investments in families and support abortion and those who oppose abortion on the basis of their “pro-family” values — should be forced to reckon with our country’s failure to support families. All of us, including people in the middle of the political spectrum and those on the right, should ensure that policymakers account for the everyday realities of people in America, make real public investments, and enact new standards and protections to support parents and children.

It is shocking that even the basic facts are contested: The majority opinion suggests all is fine and that pregnant people are supported at work and have access to family leave, while the dissent focuses on the truth, correctly recognizing that “many women…do not have adequate healthcare coverage before and after pregnancy; and, even when insurance coverage is available, healthcare services may be far away. Women also continue to face pregnancy discrimination that interferes with their ability to earn a living. Paid family leave remains inaccessible to many who need it most.” As a result, families struggle financially, emotionally, and mentally, forgo opportunities, and are forced into impossible choices.

It’s time to demand that those who have taken the country backwards on our rights, dignity, and autonomy also take us forward in supporting children, parents, and families.

A reckoning with realities for pregnant people, families, and children is long overdue. The United States is currently the only high-wealth country that does not guarantee new mothers paid maternity leave and one of a small group that does not guarantee new fathers paid paternity leave or parents the support to care for a sick child. The private sector has failed miserably in filling public policy gaps for both biological and adoptive parents. Fewer than one-fifth of parents work for employers that provide paid parental leave to all workers at their jobs, and for low-wage workers, access to paid family leave is much lower. As a result, most fathers take no time or just days to care for a new child: Only five percent of dads take more than two weeks to provide care, and nearly one-quarter of women are back at work within two weeks of giving birth.

Child care in the United States is the fourth-most expensive among high-wealth countries, and public spending on child care and early education trails virtually every other economically competitive country. Child care is also unavailable to many families, who live in “child care deserts,” where there are at least three children waiting for any one child care spot, which means parents either cannot work, rely on informal care, or struggle with unstable care. Irregular and part-time work schedules provide further challenges for parents seeking childcare, and work requirements for subsidized child care often put low-income parents in a bind related to looking for work or pursuing education and training.

What’s more, families’ access to living wages, healthcare, housing, and transportation is not guaranteed, and access to education for pregnant and parenting students is challenging. Systemic barriers to credit, wealth, work, and opportunity make everything more difficult for Black and Latine communities (especially women), immigrants, people with disabilities, or those with marginalized identities. Access to healthcare, high-quality jobs, and other services is also more difficult for people in rural communities. And states that already have or will soon restrict or ban abortion offer even fewer protections, rights, and supportive programs than other states.

Policymakers and advocates in the political center and on the political left in the United States have sought to address these challenges. Survey after survey show that voters in the political middle and on the right want these challenges addressed. But policymakers on the right are divided on and often hostile to public policies that address these issues even as they proclaim the sanctity of “life” and the beauty of children and families. A recent Washington Post story profiled a long-time anti-abortion activist who urges others to invest in families. But comments from anti-abortion politicians eschewing the federal government’s role in addressing supports for parent, child, and family show just how elusive that support may continue to be.

Action must come quickly, whether in a bipartisan way or with Democrats acting alone to fill the breach.

There’s an immediate need for Senate Majority Leader Chuck Schumer (D-N.Y.) to bring the Pregnant Workers Fairness Act to the Senate floor. This bill, which would establish a right to reasonable accommodations for pregnant workers, passed the House of Representatives nearly one year ago with overwhelming bipartisan support. It has the bipartisan votes to pass the Senate now, and a vote is long overdue.

There’s also an urgent need to finish the reconciliation process that Congress has been grappling with all year. Leader Schumer should insist that his colleague, Sen. Joe Manchin (D-W.Va.), supports major new child care investments proposed by Sens. Patty Murray (D-Wash.) and Tim Kaine (D-Va.) to meet Manchin’s prior concerns, at a minimum. Senate leaders should also urge Manchin to revisit his objections to the national paid family and medical leave program included in the Build Back Better Act, which passed the House last November. Subsidies for healthcare and tax relief for families with children should also be part of this package to ameliorate the implications of Dobbs for some parents’ economic security in the long term. But even these watershed investments would only be a start — and their odds of passing are far from guaranteed.

Families have long needed more support from public investments. Ideological divides among lawmakers too often obstruct progress. Now, at this dire and devastating time, it’s time to demand that those who have taken the country backwards on our rights, dignity, and autonomy also take us forward in supporting children, parents, and families.