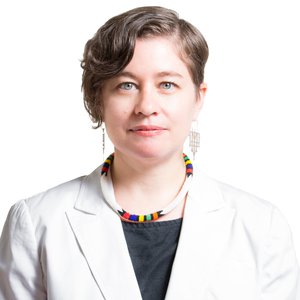 Greta Byrum was the director of the Resilient Communities program at New America.

She is currently co-director of the Digital Equity Laboratory at The New School, a university center advancing digital equity through organizing, applies research, and policy strategy.

Previously, Byrum provided leadership for the field team at New America's Open Technology Institute, co-developing the "Digital Stewardship" approach to community technology with partners in Detroit and Brooklyn. While at OTI, Byrum also produces a suite or recommendations for community-led broadband planning, developed an impact evaluation plan for the nationwide public-private partnership EveryoneOn, and contributed to evaluations of other broadband programs including Federal stimulus projects in Detroit and Philadelphia.

Byrum's public speaking includes keynotes for the Meeting of the Minds Summit and the American Planning Association's annual conference, featured talks for Futureshocks 2018 at the Museum of London, Bloomberg Live, MozFest 2017, Moogfest 2016, SXSW 2015, 2016, and 2018, Harvard's Berkman Center for Internet and Society, MIT's Urban Risk Lab, the Net Inclusion Summit, the Lincoln Land Institute's Journalists Forum, the Personal Democracy Forum, and Marketplace Tech. Her writing on resilience and community technology has been featured in Politico, The Atlantic, Pacific Standard, Slate, Real Clear Policy, the International Journal of Communication, and the Journal of Community Informatics.

Byrum's other activities include micro-radio broadcasting, poetry, and art. As co-creator of the curatorial team dBfoundation, she has exhibited in New York, Los Angeles, and around the world. She holds an MS in urban planning from Columbia University and an MFA in poetry from the Iowa Writers' Workshop. Greta was also a 2017 Loeb fellow with the Harvard Graduate School of Design, where she focused on democratizing communications systems for communities affected by climate change and systemic inequity. She current serves on the boards of the METRO New York Libraries Council and the New Harmony Earth Sanctuary.