Tools for Planners and Communities 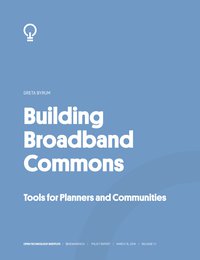 As networked technologies transform the places where we live, digital participation becomes ever more important for access to basic rights, services, protections, and opportunities. Yet a focus on urban technologies as a series of services, apps, and platforms often leaves out consideration of underlying physical broadband infrastructure. While the academic and institutional field of urban design and planning has traditionally not included planning for broadband systems, it is increasingly clear that broadband is an essential service, and that urbanists, governments, organizers, and residents all have roles in ensuring that everyone has reliable access.

Yet with up to 28% of American households—primarily in underserved and traditionally marginalized communities—lacking reliable broadband connections at home, inequitably distributed broadband resources can have a profound effect on many citizens’ ability to participate in economic and social activity. While most digital inclusion policies and programs address individual choices around broadband adoption and digital participation, the design and distribution of broadband infrastructure itself is a fundamental element of equity—and in our digital society, a question of equal opportunity and basic rights.

So what roles should government, private industry, and civil society play in ensuring that all citizens have access to sufficient broadband services? Usually, broadband is considered to be either a private-sector service or a publicly-owned and operated utility. However, the growing prevalence of multi-sector, multi-layered approaches for other large-scale public systems suggests a different model. In particular, the fields of resilience and ecosystem services have produced a decentralized, participatory approach to addressing systemic issues such as stormwater management and disaster response and adaptation.

Meanwhile, many community-led networks around the world are already demonstrating a similar decentralized, cooperative “common-pool resource” approach to designing and building networked communications technologies. This is not simply a fusion of private (corporate) and public (government) forces, but rather relies on community leadership, skills, and expertise.

A community-led method of planning and provisioning broadband employs carefully managed partnerships, rebuilds the role of government and other institutions, and treats citizens as collaborators and experts on their own needs. As cities and towns work towards planning more collaborative, redundant, flexible, and ecologically adaptive systems in general, broadband infrastructure can be a site of pioneering resilience.