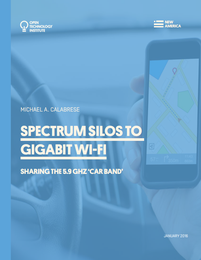 The enormous and increasing economic value of unlicensed spectrum for both personal and business productivity is well-documented. In addition to generating more than $200 billion in value for the U.S. economy each year, unlicensed spectrum serves as an incubator of wireless innovation, including as the connective tissue of the emerging Internet of Things. A single application – Wi-Fi – already carries between 60 and 80 percent of all mobile device data traffic, making wireless Internet access far more available, fast and affordable for consumers.

Unfortunately, there are obstacles to extending and expanding the public interest benefits of Wi-Fi. One challenge is that the unlicensed bands themselves are becoming congested, particularly in cities and other densely populated areas where many users are sharing spectrum in order to operate increasingly high-bandwidth applications like video chat and streaming video. Although unlicensed bands are used very efficiently – due to sharing and small-area re-use of spectrum – the FCC has not increased access to unlicensed spectrum at the same pace as it has for licensed services.

Watch the event, covered by CSPAN

A second related challenge to the nation’s broadband goals is throughput capacity. With more and more users demanding increasingly high-bandwidth and real-time applications, such as high-definition video calling and streaming, the 20 megahertz wide channels that characterize today’s Wi-Fi do not offer enough capacity to accommodate the projected increases in demand for mobile data. Wider channels will be critical to fuel very high-bandwidth apps and pervasive connectivity. This is particularly true in the enterprise environment and in user-dense venues such as schools, hotels, retail malls and sporting events.

As Wi-Fi transports an increasing majority of the nation’s mushrooming mobile data traffic, Americans will need both more unlicensed spectrum and the wider channels necessary to handle higher-bandwidth applications and higher-density demand. Opening large contiguous tracts of spectrum in the 5 GHz band for unlicensed sharing is key to creating the “wider pipe” required for gigabit Wi-Fi networks.