After Mosul: Enlarging the Context of the Syria-Iraq Conflict(s) 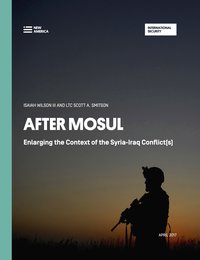 There is a long-standing credo in strategic theory and practice that American war planners, strategic advisers, and decision-makers need to revisit and relearn from time to time: When faced with what appears to be an intractable problem ... enlarge the context.

Today is one of those times. The United States and the international community of democracies, led by the United States, find themselves once again stuck between Iraq and a hard(er) place: Syria.

Part of the difficulty the United States faces in Iraq and Syria results from its tendency to approach regional and global security challenges far too narrowly and too piecemeal. As a consequence, our attempts to solve complex challenges often prove anemic, even exacerbating existing problems. This problem knows no partisan political preference; it has plagued both Republican and Democratic administrations and their national security and defense apparatuses alike. The core and vital national security interests of the United States do not lie within either Iraq or Syria, but rather between them — at the nexus of one failed state (Syria) and one critically flawed and pathologically weak state (Iraq).

We should not expect the Syrian or Iraqi states to have the capacity to secure the respective sides of their border, including large tracts of Sunni-dominated territory, in the foreseeable future. Additionally, the presence of Kurdish autonomy movements and external actors keenly interested in the outcomes of Kurdish ambitions in both countries will ensure the possibility of conflict. Meanwhile, U.S. policy toward the greater Middle East lacks a clear and confident footing.

When faced with what appears to be an intractable problem ... enlarge the context

Failing to identify and deal with the larger conflict delegitimizes the United States’ position as the leading global power and worsens the security dilemmas threatening to unravel the long-standing and stable Western-liberal world order.

A “treat the symptoms” approach is necessary, but insufficient to cure the “compound security” ills plaguing world-system order, stability, and legitimacy today. While such treatments may make us feel better in the short term, this approach could stoke false hopes. The body politic could be dying of the more chronic disease.