Weather Eye: Stories from the Front 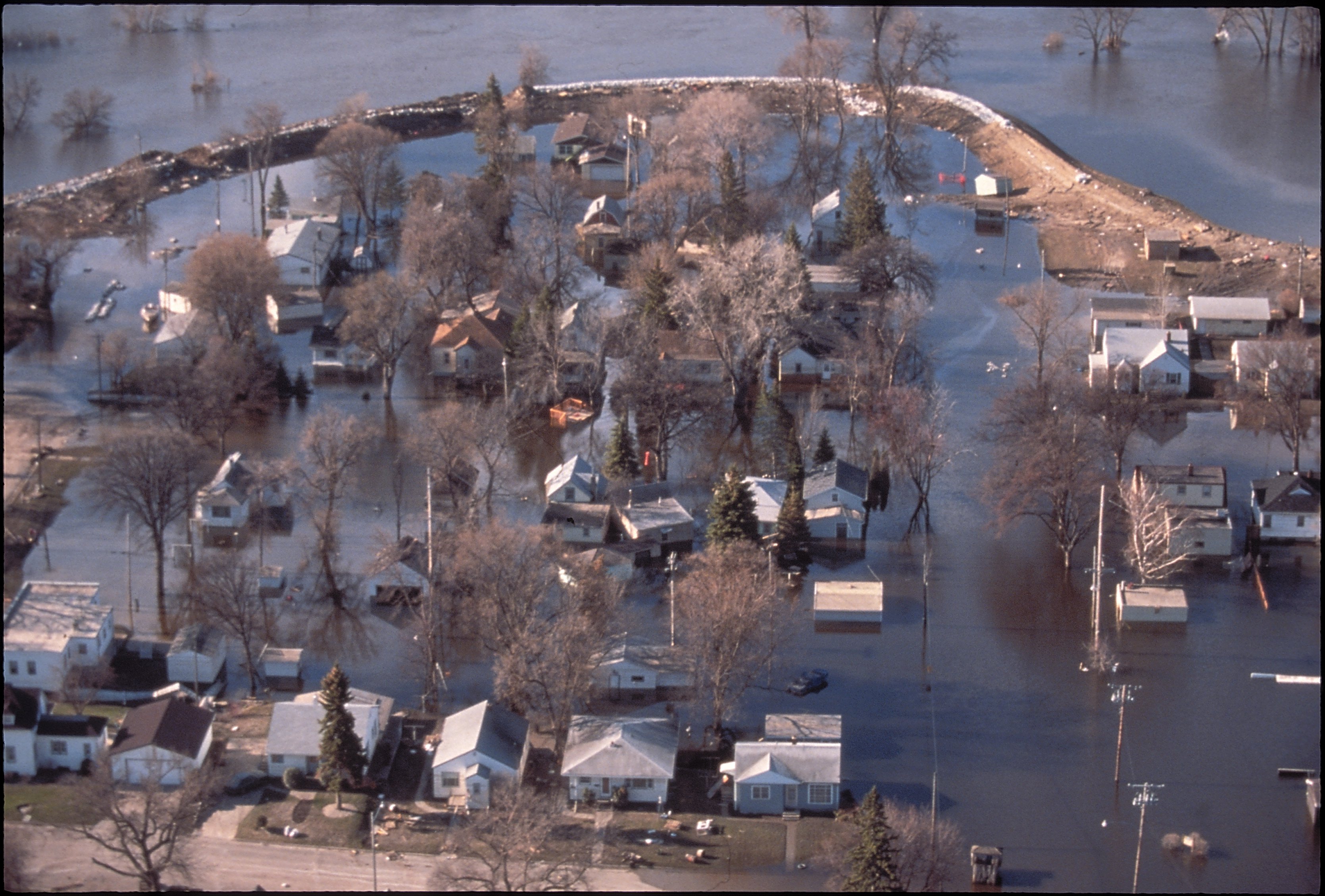 Skip to the Narrative

Located in the northeastern quadrant of North Dakota, Walsh County is separated from neighboring Minnesota by the Red River of the North—a 550 mile long river that flows from northeastern South Dakota into Canada. The county also resides within the Red River Valley and Forest River Watershed regions, all of which make it prone to flooding.  As a result, Walsh County has declared 25 flood disasters since 1965.

The flood of 1997 (pictured at the top of this page) is often cited as the worst flood in recent memory for Walsh County. Leading up to the major flood event, the state witnessed three severe winter storms from November-December 1996 and four severe winter storms in January 1997. In those events, a heavy snow melt raised local expectations for flooding as spring approached and temperatures began to rise. As part of local preparations, the North Dakota National Guard assisted with snow clean up efforts and the Walsh County Highway Department delivered sand to rural residents. Despite the preparations, the flood cost $5 billion in damages throughout the Red River Valley, according to FEMA data. Additionally, more than 2 million acres of prime wheat land was inundated. The most affected area in Walsh county was Minto—a city very close to the Red River, with just over 600 residents. The snowmelt caused overland flooding into a rising Forest River—a tributary of the Red River—and upwards of three feet of water roared into Minto.

In 2010, a series of factors combined to create the perfect conditions for a particularly severe flood. To start, a large amount of snow had fallen across northeastern North Dakota during the winter of 2009-2010, totaling 40-50 inches by March. Then, throughout March the temperatures climbed to unseasonably warm levels. Climate stations located in the nearby cities of Fargo and Grand Forks registered temperatures 6-14 degrees above normal. As a result of these abnormally high temperatures, snowmelt quickly accumulated throughout the northeastern portion of North Dakota, including Walsh County. To make matters worse, a storm system from the central plains drifted into the area around the same time and dropped 1.5-2 inches of rain across the county. This series of events led to flooding in Walsh County that ultimately caused the closures of numerous roads, including portions of two main interstates.

Severe winter storms, although resulting in few disaster declarations by Walsh County, can also be a dangerous affair. The snow storms of 1997 prior to the massive spring flood event were extremely harsh. According to NOAA data, Walsh County experienced five severe snow storms from January 9th to April 5th. During this time, the Red River Valley experienced heavy snowfall ranging from 7-8 inches and strong winds upwards of 45 mph that produced wind chills of  50-70 below zero. The conditions were so harsh, a 33-year-old man died after he left his stalled car during a storm. Additionally, conditions caused a bus full of 15 people to become stranded, with its passengers waiting 15 hours to be rescued.

Finally, another dangerous  element that overlaps the harsh conditions brought about by winter storms in Walsh county are ice storms. During the blizzards in 1997, two ice storms occurred. On top of the large amount of snowfall in the Red River Valley, both ice storms carried 0.5 inches of freezing rain over the region. Not only did the freezing rain heighten hazardous conditions on roads in the county, it accumulated on top of exposed surfaces. According to emergency planners, 0.5-2 inches of ice built up on electricity infrastructure, such as power poles and powerlines. Hundreds of power poles and power lines snapped due to the weight of the ice, and many businesses and homes were left without power.

Resilience strategies that work for urban areas may not work as well in places with such a low population density. Indeed, the experts we talked to highlighted that Walsh County residents have found ways to prepare for and respond to weather disasters that fit their rural region.

According to our research, Walsh County is particularly susceptible to widespread and damaging floods. Gregory Gust, the warning coordination meteorologist at the National Weather Service in Grand Forks, explained why: “[The county is] frozen all winter long, so virtually all the snow you get is piled up and waiting to melt in the spring.” Then, when the snow does melt, he added, “The ground is still frozen, so the majority of that is running off as water into rivers and streams.” Plus, the eastern half of the county, where the Red River Valley is located, has a flat topography, which allows the flood water to flow over the frozen ground for miles, affecting roads, houses, and farmsteads across the county.

As a result, these floods touch even the most far-flung corners of Walsh County. In fact, the emergency experts we spoke to identified lack of access to individuals in remote areas during floods as one of their biggest challenges. As Jessica Kulzer, the disaster program manager at the Red Cross for Northeastern North Dakota, pointed out, “There are a couple roads that can get you to Walsh County, but it’s not like the inner city where you can take 15 routes to get to that one destination. So when a certain road is flooded out it impacts a lot of different services that can be provided.” Brent Nelson, the emergency manager for Walsh County, repeated the same concern: “A lot of times, our biggest issue with flooding is getting to locations. Roads get washed out, culverts are damaged, and bridges can get damaged.”

Given these difficulties, Kulzer told us, the Walsh County area Red Cross decided to focus on preparedness, providing the tools and information to area residents in “blue sky” time (i.e., before a disaster occurs). That way, if access is blocked during a flood, individuals have the means to stay safe until the water recedes. Kulzer confirmed: “That’s why we do a lot of pre-station things, so that when we know Walsh County is going to have a bad year, we start prepping and talking, ‘Do we need more clean up kits, do we need to get you guys food established for feeding?’”

Nelson noted that residents in Walsh County are also pretty well-accustomed to preparing for floods because many families have lived in the area for generations. “A lot of the people have dealt with it many times,” Nelson said,  “So they are well aware of what to do.” Other experts emphasized that many, if not most, residents in Walsh County have a network of friends, family, and neighbors that they can rely on during and after a storm, even in the most remote areas. Kulzer reasoned that this strong social network could be one explanation for why traditional Red Cross response efforts, such as shelters, do not always work well for Walsh County. “I’ll tell you this,” she explained, “Most people don’t go [to shelters during a storm] and the reason why is because they have 15 neighbors they are best friends with that they usually go to. Or their aunts and uncles or nieces and nephews, cousins, whatever it may be, live in a better area 20 miles to the east.” Plus, our interviewees generally expressed a belief that this is part of the local culture, that people help each other.

"We don’t have a lot of resources or paid staff to deal with a lot of this. All of my fire department, my medical staff, ambulance are all volunteers… My responders are a very good help… but there are only so many of them to go around.”

To Nelson, this individual preparedness is a great asset, especially considering the county’s institutional capacity. “It’s a huge help for us,” he said. “Again, because of our rural nature we don’t have a lot of resources or paid staff to deal with a lot of this. All of my fire department, my medical staff, ambulance are all volunteers… My responders are a very good help… but there are only so many of them to go around.”

As Nelson pointed out, a smaller population means a smaller county government with a smaller budget and fewer resources to allocate to disaster relief and preparedness. Once in awhile, the county is able to apply for and win federal grants to improve flood mitigation efforts, but Nelson pointed out that such opportunities are not always available: “[Being rural] hurts us in competing for some of those federal grants because the cost-benefit isn’t there. You’re not necessarily benefiting enough homes or enough individuals for the cost of some of these projects.”

As a result, the county’s community resilience is as much a necessity as it is a benefit. Of course, Nelson and relief organizations still play a vital role, especially when weather disasters overwhelm individual capacity. They are also there to help those who can no longer be self-sufficient, such as the elderly, disabled, or those without large social networks to lean on. But the professional emergency managers tend to be modest about their own relative contribution to community resilience and point instead toward the local culture. “We are Midwest nice,” Kulzer said of Walsh County, “People just look out for each other.”

Weather Eye: Stories from the Front

The Weather Eye project looks at weather-related disasters in the United States, telling the stories of disaster-ready communities–and communities that need to be ready.