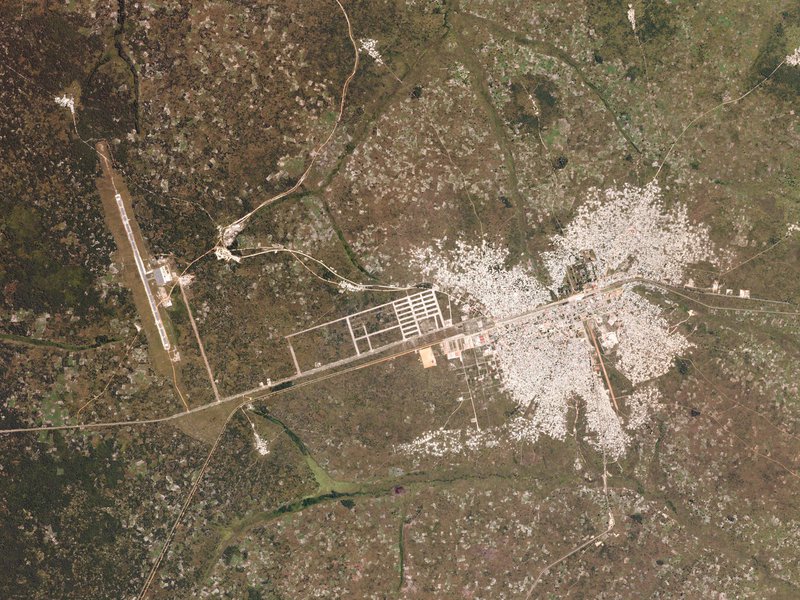 Below is our working list of technologies, the ways they facilitate property rights formalization and some examples of how they are being used. If you have comments or suggestions about this list please contact us at FPR@newamerica.org. The first three—imagery from satellites, drones, and mobile phones—are being used to help formalize informal property. The next three—digital identity, digitization, and blockchains—are being applied to existing registries to increase transparency and accessibility, which will facilitate future transactions. The last technology has already assigned a potential address to every point on the globe.

1. Imagery from satellites complete with geo-referenced data is a faster and more affordable option than securing the services of land surveyors. The value of recent images is clear when the first questions in a land rights formalization process are: “What is happening on the land in question? How many buildings are there? Where are the walls or other proxies for property boundaries?” Satellite imagery varies in terms of price and resolution, not to mention the complexities around licensing and finding all the various images available. One organization helping to address this is the Open Aerial Map. The speed of change here is significant with companies like DigitalGlobe (founded 1992), Planet (founded 2010) & others, racing to provide images of the whole planet as often as daily at ever better resolution. Imagine what a lawsuit over property encroachment or an adverse possession claim might look like when the court can pull up a website and view the land in question every day for the past few years?

2. Imagery from drones can also provide high quality, low-cost images of areas to be mapped in a day. Now a drone can be flown over a community on Monday, the laptop can run all night stitching images, and a community meeting could be held on Tuesday to review who lives where. The New America Drone Primer is a recent compilation of multiple cases of drones being used for mapping, conservation, human rights and supporting fragile states—all issues related to property rights.

3. Mobile applications on GPS-enabled phones can facilitate geo-tagged boundary demarcation, and other information needed to assert a claim to land and help a family move up the continuum of land rights. Two examples of this idea being applied are:

Cadasta’s platform works with OpenDataKit and GeoOpenDataKit to upload data onto their platform to help document land use on the cloud.

See our subsequent March 2017 article on dual-band for more on GPS.

4. Digital identity for a population is required if you are putting a cadastre (property registry) in digital format. Conceptually, a registry is documentation of the “who, what and where.” Who has the rights? What kind of rights? And where is the land they have a claim to? If the technologies mentioned here enable digital mapping of the land parcels, then the validity of the cadastre is bound not by the maps, but by the quality of the data on the people connected to those parcels. A name and other biographical information can be entered into a database along with a copy of an identity card, if available, but how can that information be verified? In developed countries with existing national identification schemes or strong rule of law/high formality, this is less of an issue, but in developing countries with high degrees of informality, it is a significant challenge. One that has been met in India.

The growth and success of a biometric identification system in India—Aadhaar—has been called “the largest and most successful I.T. project in the world.” Issuing the first ID in mid-2010, 85 percent of the Indian population now has an ID number tied to biometric indicators, as of December 2016. The system is so widespread that existing formal land transactions are starting to incorporate Aadhaar numbers to avoid fraud and are expected to soon make their use mandatory. A recent study of land rights and informality in India specifically identified the question of Aadhaar’s impact on formalization efforts in India.

5. Digitization of existing records allows for public inspection of who owns which parcel which reduces fraud and increases security of title. Once registries are fully digitized, the cost of verifying current ownership drops which reduces informal payments and transaction costs. Assuming they will then be accessible from any internet connected device, the perceived security of a deed will increase and the cost of a deed being lost or stolen will be diminished.

Examples of countries digitizing registries range from developed to developing to those in post-conflict reconstruction.

The Dutch land administration agency Kadaster will help the Department of Lands and Survey (DLS) in Jordan digitize their land records.

The Government of Kenya completed the digitization of 13 registries in 2016, stating that “The digitization of land records is aimed at enhancing efficiency, taming corruption and eliminating cases of missing records.”

Afghanistan, as part of their reconstruction process, digitized almost half a million new deeds from 2012 - 2015. (For more on property rights for fragile state reconstruction read Doug Batson’s book on Afghanistan.)

6. Blockchain, the technology that enables Bitcoins, is an “immutable trustless registry of entries, hosted on an open distributed network of computers.” The potential applications of blockchain to a wide variety of financial transactions has garnered significant attention. There are thorough readers on the topic from a number of consultancies (Deloitte, BCG, Capgemini) as well as a textbook from Princeton—all of which mention the potential application of Blockchain for property rights. Colored coins and smart contracts are extensions of the Blockchain technology which are applicable to land transactions.

Multiple companies are putting this theory to the test at the moment. See the list here.

See our subsequent February 2017 article for more on Blockchain.

7. Geodesic place codes are another innovation to watch as we imagine the future of property rights. As The Atlantic recently observed, “make no mistake: Postal addresses are a technology.” The company they were describing is what3words. w3w has carved the earth up into 57 trillion squares measuring 3 meters across and assigned each one a three-word name. (The size is the smallest unit where mobile phone GPS are still accurate.) No longer does one need to depend on a national postal service to be given an address, or use GPS to locate something, every meter of the earth can be found with three random words. So far three nations who struggle with some combination of low population density, nomadic populations, undeliverable mail and “large settlements [which] often have no address system at all” has adopted what3words for their national addressing system. In an example specific to land reform, the South African Department of Rural Development & Land Reform is using w3w to identify the center point of parcels of land given to families to cultivate their own food.

The images, phones, apps, scanners, biometrics, servers, and addresses are in place. Now we need to use them to help people move along the continuum from informality to security, to full title. In doing so we will be leveraging technology to change the lives of the billions of people on earth who do not enjoy formal claim to the place they call home.

The Future of Property Rights Technology