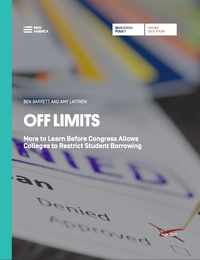 Should Sen. Lamar Alexander (R-Tenn.) deliver on his promise to allow institutions to set their own limits on federal student borrowing, new research provides a glimpse at how they may target certain groups of students.

Institutions have traditionally asked for this flexibility to protect both students from default and themselves from federal sanctions. But the solution of limiting loans stems from the belief that problems arise as a result of overborrowing.

“We are a commuter school, but you see students borrowing crazy amounts of money, and you wonder, what are they doing with it?” said Michelle Chapman, a financial aid administrator at Atlanta Metropolitan State College, one of the experimental sites.

Laitinen and Barrett assert that the students at the highest risk are instead borrowing in smaller amounts and are not graduating with a degree of value, if they graduate at all. And the schools which they attend—largely community colleges and public less-than-two-year institutions—are at the highest risk of facing penalties.

Loan limits, they conclude, could create more problems than they solve. Namely, these restrictions could limit access, or push students toward private lenders.

The authors recommend a number of alternate solutions, including:

“Before contemplating such a dramatic change to decades of policy, and without substantial evidence on how it will affect students, leaders at all levels should consider the many worthwhile alternatives,” said Laitinen.