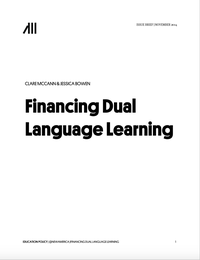 Dual language learners make up a sizeable—and growing—portion of the student population, particularly in some states and school districts with large immigrant populations. Yet the federal role in helping states and school districts to teach and support those students remains rather limited. Congress contributes just 1 percent of the U.S. Department of Education’s budget to English Language Acquisition grants for states. Those funds, allocated through Title III of the Elementary and Secondary Education Act, provide virtually all of the federal support for dual language learning students.

Furthermore, little is known about the history of financing for that program, how those funds are distributed to states and localities, or whether they are meeting the needs of dual language learners in the United States. This issue brief, first published as a blog series at EdCentral.org, sought to demystify the funding structure for Title III dollars and provide policymakers with some context for the program’s complicated history.