Federal Funding for Students with Disabilities

The Evolution of Federal Special Education Finance in the U.S. 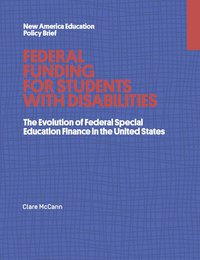 In Federal Funding for Students with Disabilities: The Evolution of Federal Special Education Finance in the U.S., New America provides a history of special education financing in the U.S., and highlights the latest shift in the mission of the IDEA funding formula: a change from providing dollars directly based on the number of special education students, to ensuring the federal government provides sufficient resources for those students without encouraging the over-identification of children as requiring special education--mainly by cutting out financial incentives to do so. The report describes in detail the twists and turns of the decade-old federal IDEA formula still in use today, including several politically driven provisions that distort IDEA allocations on behalf of some states at the cost of funding for children in other states.

Furthermore, an analysis of New America’s Federal Education Budget Project data on federal special education allocations by school district revealed that the formula used to distribute federal IDEA dollars results in uneven per-child funding across school districts and states. Smaller districts, as well as districts within the smallest states, have higher median per-child spending. Similarly, districts that have seen declining enrollment since the base year of funding, which hasn’t been updated in well over a decade, receive higher average per-child IDEA allocations.

The first-of-its-kind analysis of school district-level special education grant allocations provides critical and previously unseen insights into the on-the-ground effects of lawmakers’ decisions in structuring the IDEA formula and in postponing its reconsideration. Furthermore, the report will be an important resource to policymakers, researchers, and advocates as Congress faces an upcoming debate over federal funding formulas in the IDEA reauthorization.