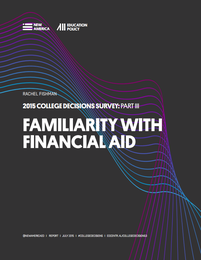 Today, New America’s Education Policy Program released the third in a series of College Decisions Survey briefs that analyze new survey data about what prospective college students know about the college-going and financing process. Part III: Familiarity with Financial Aid focuses on what information students know about financial aid options. It looks at the types of financial aid with which prospective and recently-enrolled students are familiar and how they learned about them.

Current news coverage of higher education focuses mostly on rising college prices and increasing student debt loads. It’s unsurprising, therefore, that students and families face increasing anxiety when it comes to figuring out how to pay for college. So, how do prospective students think they will use financial aid programs to pay for their postsecondary education? According to an online survey of 1,011 U.S. residents ages 16-40, who were largely prospective college students (with the remainder in their first semester of college), students were most familiar with scholarships they receive from a college (82 percent), student loans (79 percent), and state scholarships/grants (61 percent). Students were least likely to be familiar with Pell Grants (44 percent), tax credits/deductions (35 percent), Federal Work-Study (34 percent), VA education benefits (29 percent), and the Supplemental Educational Opportunity Grant program (27 percent). The survey was commissioned by New America and conducted by Harris Poll in October-November of 2014.

Nearly half of students (48 percent) with a household income of less than $50,000 were unfamiliar with the Pell Grant, even though U.S. Department of Education data show that 92 percent of students who applied for federal student aid from that income level received Pell. This includes over a quarter (27 percent) who had never heard of Pell Grants before this survey. The lack of familiarity about Pell creates a barrier to an affordable higher education for low- and moderate-income students because many states and institutions use whether a student is Pell eligible as the criterion for awarding their own need-based financial aid.

Using (or not using) various information sources and tools can also affect a student’s knowledge of his or her financial aid options. One such tool--the federally-mandated Net Price Calculator (NPC)--can help students estimate their cost of attendance based on personal financial information. However, only 14 percent of respondents reported using a NPC in their financial aid research. More than half of students (52 percent) had never even heard of the tool. Despite this, 84 percent of those who had used the NPC said it was helpful or very helpful.

“Given that familiarity of financial aid programs varies so much, more must be done to ensure that students are aware of their financial aid options, especially for low- and moderate-income families,” said Rachel Fishman, senior policy analyst with New America and the report’s author.

Early awareness campaigns to help students understand their financial aid eligibility can kickstart the process. In addition, transitioning to using “Prior-Prior Year” taxes (the tax return filed before the most recent tax year) to fill out the FAFSA will allow students to access potential financial aid packages long before making an enrollment decision. Improving and emphasizing the Net Price Calculator tool can also have a positive effect on a student’s understanding of his or her financial options ahead of admission and enrollment timelines.

More About the College Decisions Survey

New America commissioned Harris Poll to create and administer the College Decisions Survey. A national online survey was conducted between October 7th and November 3rd, 2014. The sample included 1,011 completed interviews and consisted of U.S. residents ages 16 to 40 who do not have college degrees and plan on enrolling in a two-year or four-year college within the next 12 months (n=747). The survey also included individuals who were in the first semester of their first year at a two-year or four-year college (n=264).

The five College Decisions Survey briefs will be released during the summer of 2015 and will cover topics including: